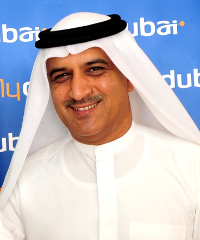 According to Flydubai’s CEO Ghaith Al Ghaith, the airline is the first UAE carrier to serve Bujumbura (Burundi), Juba (South Sudan) and Zanzibar (Tanzania). “We have seen strong demand for travel across our network in Africa,” he said in a media statement.

Djibouti was Flydubai’s first destination in Africa. Today it flies to 12 cities, including Dar es Salaam (Tanzania), Addis Ababa (Ethiopia), Kigali (Rwanda), Entebbe (Uganda) and Khartoum (Sudan). It is also the first low-cost airline to offer a business class option to Dubai from destinations such as Juba.

The Flydubai’s cargo transportation has also seen increased demand from the continent, with Juba amongst one of its busiest cargo routes globally.

The airline, currently offering five flights a week to South Sudan’s Juba, has announced that it will soon offer daily flights to the capital. And Burundi’s capital Bujumbura will also see frequency of flights increase from two to three a week.

The route to Zanzibar, launched in October 2014, has seen increased demand as well, and Flydubai will double its weekly flights from two to four. The airline will also, from June, increase flights to Egypt’s Alexandria – from two a day to three.

With these additions, Flydubia’s overall number of weekly flights to the continent will increase from 63 to 78.

The Dubai-based national airline Emirates has also increased its business on the continent, and last year Tim Clark, president of Emirates, said the continent makes a solid contribution to its overall bottom line.

The UAE, is also promoting Dubai as a gateway for investment into the continent. Over the past two years Dubai has hosted an annual Africa Global Business Forum in an effort to boost the presence of Gulf companies on the continent, and position Dubai as a trade and business hub for the region.