“For me changing the world isn’t about creating a new phone that the whole world buys. For me it is just about bringing positive change to the local community.” 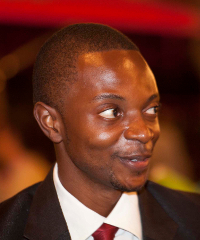 Cameroonian Nteff Alain is the 22-year-old entrepreneur behind GiftedMom, a new e-content platform for pregnant women that provides information to combat the high number of mother and infancy deaths in under-serviced communities in the country.

Last week he was named the winner of the 2014 Anzisha Prize, an award for African entrepreneurs between the ages of 15 and 22, and received US$25,000 to grow his venture.

Alain is a telecommunications engineering student, and the idea for GiftedMom came to him while visiting a childhood friend who was doing his medical internship in a rural community. His friend was distressed, having seen a particularly high number of premature babies die that week.

“The problems for these babies were caused by disease and infections like chlamydia, syphilis and malaria, which can be treated with antenatal care. But most women simply don’t go to antenatal clinics,” he explained to How we made it in Africa.

And in rural areas, the medical supplies needed to look after premature babies, such as incubators, are not available. “The infrastructure is simply not there, so there was this need to prevent the situation before it arose.”

So Alain started doing some research. He found most of the problems during pregnancy can be prevented through educating women and providing them with vital information for a healthy pregnancy.

“I noticed many necessary medical resources are already there for these women. For instance, premature births can be caused by malaria and malaria treatment is free. The women just don’t know it. They think if they go to hospital they will be charged a lot, so they seek traditional solutions which invariably increase the complications of pregnancy.

“Help is often in place, but no channel to actually educate these women on what’s available… there was a need to link the two,” he explained.

“So I thought: this is one of Africa’s oldest and biggest problems, and medical personnel have been trying everything, but it’s not working. I have IT skills… and just knew using technology and innovation could help solve this problem.”

The solution – simple but effective

Mobile penetration is high in Cameroon, even in rural areas, and Alain realised he could use this platform to get valuable information to women. He built an SMS application and got in touch with an international NGO, Mobile Alliance for Maternal Action (MAMA) to form a partnership.

The organisation provided the general information women need during pregnancy. He then got medical students to customise the messages into Cameroon-specific content and last year started the pilot phase in the Mankon community of northwestern Cameroon.

His highlight came when he watched a pregnant woman receive her first SMS.

“The first message just welcomes you and tells you we are going to send you two SMEs a week that will tell you how to have a safe pregnancy. And when she read it I just saw this joy in her, like somebody finally understands her and has her back. And it just motivated me. I just told myself every pregnant woman has to have this.”

Today the platform has over 1,200 pregnant women and mothers of newborns registered, and has expanded to 15 rural communities across Cameroon. He has also developed an Android app to help teenage mothers and health workers in underserviced areas calculate due dates.

To cover the costs of sending out each SMS, Alain had structured his business model so that the platform can offer advertising space to relevant parties.

“We are living in a world where social entrepreneurs have to be sustainable. We can’t just keep asking for funds. So what happens is that we spend 4 CFA francs to send an SMS, and we sell advertising space to companies providing maternal and infant products.”

For every SMS sent out, the advertiser pays 25 CFA francs, allowing GiftedMom enough capital to grow. Alain’s plan is to expand this platform across Cameroon and then elsewhere in Africa, with his sights specifically set on Central Africa, where newborn and pregnancy fatalities are particularly high.

Growing up, Alain always wanted to be a doctor. But after he started spending time in hospitals and meeting medical personnel in high school, he realised it wasn’t for him.

“I noticed that I am actually a very adventurous person and the medical field is stiff… to innovate in medicine you really have to have 30 years of experience… and then I noticed the engineering field and that with engineering, particularly with IT, you could change the world with just coding. You don’t need much financial capital, just some intellectual capital.”

While at university, he co-founded PO Labs, a tech incubator for engineering students to build technology solutions to solve problems in communities, as well as provide training. He was soon after selected as the Google Student Ambassador for 2012 and today he is a World Economic Forum Global Shaper.

The most important step is the first one

Alain said it is easy to lose motivation when trying to plan how to overcome many of the challenges of starting and growing a company. However, he has learnt that once an entrepreneur takes the first step, the solution for these challenges start to become clearer.

His best advice to entrepreneurs: just get started.

“There are so many challenges in Africa that can make entrepreneurs think they can’t do something. But it’s very important they just stay focused on the goal and take the first step. And everything else will start to fall into place.”