Below is a excerpt from EY’s latest Africa Attractiveness report.

Over the past year, foreign investors tended to gravitate toward the larger, more diverse economies in Africa. These include South Africa in the south, Morocco and Egypt in the north, Nigeria in the west and Kenya in the east. Collectively, these markets attracted 58% of the continent’s total FDI projects in 2016. Given that these markets are the dominant anchor economies in their respective regions, they provide investors with greater scale and relatively more mature markets.

With a 6.9% increase in FDI projects from 2015, South Africa maintained its position as the continent’s leader from an FDI projects perspective. There was a strong pickup in FDI activity in the consumer products and retail (CPR) sector, where projects more than doubled from 19 in 2015 to 41 in 2016. For instance, in April 2016, Nestlé officially inaugurated its instant coffee factory in KwaZulu-Natal after investing R1.2bn (US$87.4m) in the plant’s expansion. Even as its economy remains under pressure, South Africa retains its appeal as a launchpad for growth across the continent. 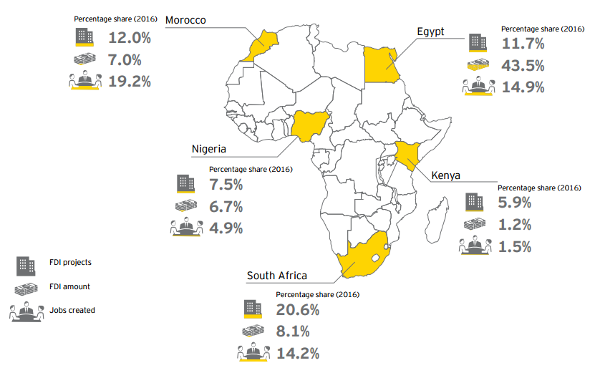 In 2016, Morocco regained its place as Africa’s second-largest recipient of FDI, with projects and capital investment up 9.5% and 46.2%, respectively. Investor confidence into Morocco is also evident from its top ranking on our Africa Attractiveness Index (AAI) 2017. Aided by a stable administration, even during the Arab Spring, Morocco has increasingly marketed itself as an export base for Europe, Africa and the Middle East. The country’s automotive sector has especially attracted investor interest, with FDI projects increasing from five in 2014 and 10 in 2015 to 14 in 2016.

Strong FDI activity in Egypt and Morocco in recent years has driven the rebound in investor appetite to North Africa. In 2016, Egypt attracted 19.7% more FDI projects compared with 2015. Even more striking was the growth in capital investment, which almost trebled year-on-year, driven by large-ticket RHC projects. Chinese companies were particularly active, with 16 FDI projects in 2016 (zero in 2015), focusing mainly on the business services and technology, media and telecommunications (TMT) sectors. There was also an uptick in FDI projects from the US and France. Egypt has embarked on an ambitious reform programme aimed at making it easier to invest by eliminating bureaucracy, liberalising procedures to obtain licenses for projects and rolling out new incentives. However, with the economy still under pressure amid a devalued currency and high inflation, Egypt ranked 11th on the AAI 2017.

In the west of Africa, recession in Nigeria resulted in FDI projects easing 3.8% compared with 2015. With the plunge in crude prices, Africa’s largest oil exporter has been hit by a scarcity of foreign exchange, impacting businesses that are already grappling with issues, including insufficient power supply and complexity in paying taxes. Nigeria’s business environment is in urgent need of improvement, considering the country’s 169th ranking on the World Bank’s Ease of Doing Business Index 2017. On a more positive note, the sheer size of the Nigerian market, and its diversification initiatives have led to a significant shift in the nature of FDI to the country. Should progress be made on various dimensions of the AAI (notably business enablement, governance and human development), Nigeria remains well-placed to become the largest FDI market in Africa over the next decade.

Kenya, which is East Africa’s anchor economy (and sub-Saharan Africa’s fourth largest), saw investment flag in 2016 after a bumper year in 2015. FDI projects were down 57.9%, while capital investment declined by 55.5%. However, if we take a longer-term perspective, FDI into Kenya has tended to ebb and flow year-on-year, similar to the experience of Nigeria. Additionally, Kenya had a strong 2015, mainly driven by a surge in projects from the UK. These understandably slowed in 2016, as the UK copes with uncertainty following the vote to leave the EU. Our confidence in Kenya’s investment prospects remains firm, underscored by the country’s strong ranking as the second most attractive FDI destination on the AAI 2017.

While foreign investors still favour the key hub economies in Africa, a new set of FDI destinations are emerging, with some of the Francophone and East African markets of particular interest to us. 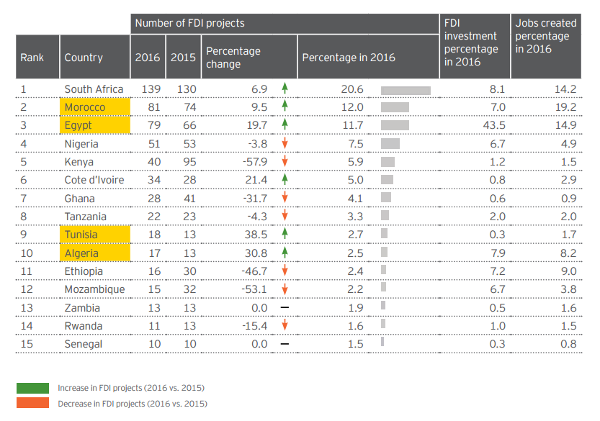 West Africa’s second-largest economy, Ghana, remains a key FDI market, despite posting below average growth in recent years, and even though FDI projects declined 31.7% during 2016. An improving macroeconomic environment, combined with a strong governance track record, has seen Ghana rise to fourth position on the AAI 2017.

Côte d’Ivoire is ranked in the top 10 of the AAI, and is increasingly attracting investor interest, with a 21.4% jump in FDI projects in 2016. According to the International Monetary Fund, the country is forecast to be the fourth fastest-growing economy in Africa and eighth-highest globally in 2017. Côte d’Ivoire is encouraging investors by its strong focus on developing infrastructure and improvements in the business environment following years of political uncertainty.

Senegal, a Francophone country (like Côte d’Ivoire), has all the makings of a strong FDI destination, although its potential does not reflect in its FDI performance for now. It does, however, rank strongly (ninth position) on the AAI 2017, up two places over 2016, owing to its diverse economy, strong strides on the macroeconomic resilience pillar as well as progress in improving its business environment, and is well-positioned to attract future flows of FDI.

Most East African economies continued to grow strongly in 2016, with Kenya, Tanzania, Uganda, Rwanda and Ethiopia all among the fastest-growing on the continent. Although there were year-on-year declines in FDI flows into East African markets generally, both Tanzania and Uganda are highly placed on the AAI 2017, ranking fifth and sixth in terms of FDI attractiveness respectively. Recent oil and gas discoveries in these countries have put them even more firmly on the investor map, although Tanzania has also benefited from a strong growth over the last decade, driven by increased investment in infrastructure and services.

Rwanda, despite a loss of three places on the AAI 2017, has Africa’s second-best business environment, according to the World Bank’s Ease of Doing Business Index 2017.

Ethiopia, where FDI levels echoed impressive GDP growth in previous years, saw its FDI projects almost halve in 2016, owing to political instability and drought. However, the country aims to build its manufacturing hub to drive employment growth. This, combined with its agricultural base and a very large consumer market, has the potential to be a major driver for future FDI flows.