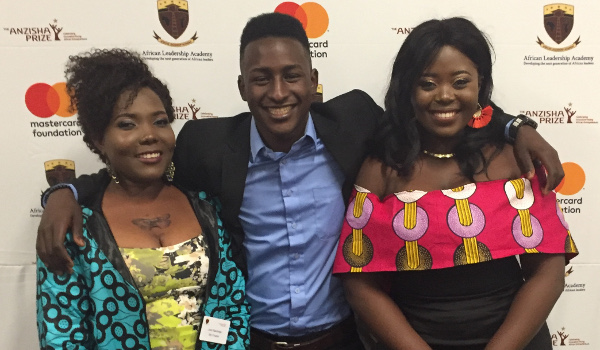 “We believe in you more than we believe in politicians.” This was the message from Sim Shagaya, Nigerian entrepreneur and business mogul and founder of one of West Africa’s largest electronic commerce websites konga.com, to young entrepreneurs on the African continent. Shagaya was the keynote speaker at the 2018 Anzisha Prize award gala held in Johannesburg, South Africa last night.

The event was live-streamed to an online audience and introduced the 20 finalists who are now part of the Anzisha Prize family, Africa’s premier award and fellowship for the youngest entrepreneurs on the continent, before announcing the grand prize winner and first and second runners-up.

The Anzisha Prize is a partnership between African Leadership Academy (ALA) and Mastercard Foundation.

In his address, Shagaya challenged the fellows and other young entrepreneurs in attendance at the event.

“I don’t think that there has ever been a generation that faces challenges as profound and great as your generation,” he said, stating that the older generation must cede leadership to the youth in Africa to tackle these problems.

Melissa Bime (22), co-founder of INFIUSS in Cameroon and announced as the grand prize winner, received a cheque of US$25,000 in prize money. “Today, I stand here to represent every young girl out there that just has her dreams. I stand here to represent this amazing group I have been part of this past week. With these people the future of Africa is very bright. We are going to change this continent, and we are going to look good doing it,” she said.

INFIUSS is an online blood bank and digital supply chain platform that makes sure that patients in 23 hospitals in Cameroon have life-saving blood when and where they need it.

“The prize money received will primarily go into setting up a laboratory for INFIUSS to test the blood that is listed,” Bime told How we made it in Africa after the event. “We’ve faced regulatory hurdles because we could not afford to do all the required safety tests. This is an opportunity to continue generating impact and even more revenue,” she said.

For Alhaji Siraj Bah (18), runner-up and winner of $15,000 in prize money, the funds he has received will boost the scope of the impact his business already has. He is the founder of Rugsal Trading in Sierra Leone, a company that produces handcrafted paper bags as well as briquettes for cooking fuel.

“I am going to use this money wisely because it is not only my money it is the 7.5 million people of Sierra Leone’s money,” Bah said. Currently Rugsal Trading sells between 1,500 and 2,500 paper bags and approximately 600 briquettes a month to hotels. “I had only 20 dollars when I started and I have created an impact already, so with $15,000 I am going to impact 7.5 million Sierra Leonians’ lives in just less than five years. It will happen.”

Joan Nalubega (21), co-founder of Uganics who produces mosquito-repellent soap to combat malaria in Uganda, received $12,500 as second runner-up. She will use this money to conduct a certification study for the company’s products to ready Uganics for export to neighbouring countries. “This way we will be able to widen the impact and work towards a malaria-free world. We will also be able to increase our production of essential oils, thus increasing youth and women employment,” she said.

The challenges up ahead

Firstly, there is the fear that Africa will not fully participate in the Fourth Industrial Revolution.

“Just at the time that our population is exploding we are being faced with a world where robots will be able to farm for us and drones will be able to do our security. What does this mean for jobs in Africa and joblessness in Africa?” Shagaya asked. He argued that it was the work of entrepreneurs, even more than governments, to address this question and find a way for Africa to participate in the latest revolution.

The second challenge, he said, was posed by a world with immense social challenges, but still ruled by a system of capitalism.

“Some of you who have been given these opportunities (such as the fellowship at African Leadership Academy) will be able to accumulate incredible wealth in your lifetimes. You have to ask yourself what you are going to do with this wealth.

“Money comes as a necessary consequence of adding value to society. If you focus solely on the monetary objective you compromise the mission. Something else must drive you than money. If it is only money – you will tire,” Shagaya said.

The third challenge, that could be also be an opportunity, is the pending demographic explosion on the African continent.

“I am here to give you the message: You guys must lead. Already we are seeing the consequences of a lack of leadership. Make no mistake: Boko Haram is no more than a symptom of demographic explosion and climate change. That is all it is,” he said.

“Harness your ambition. And it will take ‘feroic’ ambition to fix this place. We will rely on you even more than we rely on governments. Already entrepreneurs have more credibility than politicians,” Shagaya said to applause from the audience.

Preceding the gala event, the 20 fellows spent a week at the African Leadership Academy – being exposed to mentors and experts on business topics to help them on their road ahead. After returning to their home countries, each with at least a US$2,500 share of the prize money, these young entrepreneurs will have access to the Anzisha network and support system as they seek to scale their ventures.

Part of the proceedings at the gala event was to also introduce the audience to the #startnow campaign – referencing the attitude of the young entrepreneurs that there is no better time to start your business than the present, but also imploring those with capital to invest in this new wave of youth entrepreneur.

“If you have had trepidations about whether now is the time to invest in, or support, a young entrepreneur, please do not wait any longer. The time to start is now,” said Josh Adler, vice president of growth and entrepreneurship at ALA.

One of the new mandates of the Anzisha Prize will be to also find and celebrate the stories of the parents of the young trailblazers – a critical part of the entrepreneurial ecosystem that Adler said is “often forgotten”. As a first step to incorporating the insights from this group into ALA’s demonstration effect methodology, a book titled: “Parenting the boss: Insights from those in the know” was distributed to all attendees at the event. The goal is to provide parents with meaningful support on how to better enable their entrepreneurial children.

To relive the exciting evening, watch Sim Shagaya’s inspiring talk or watch the live announcement of the three winners.