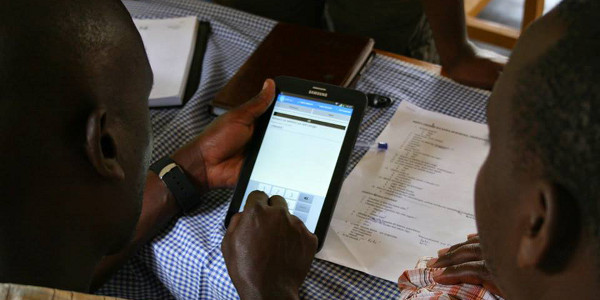 When the world was changing from mechanical and analogue technology to digital electronics four decades ago, Africa was nowhere on the scene.

Fast-forward to the present, and Africa has largely been able to catch up with other regions in mobile phone use and internet access, successfully sidestepping the era of desktop computers and landlines.

The key to Africa’s achieving its own digital revolution has been innovation at every step, with engineers adapting technology to suit the specific needs and dynamics of the continent instead of the other way around.

About 80.8% of Africans own a mobile phone, according to 2016 data from the International Telecommunication Union (ITU), the United Nations agency for information and communication technologies. This is a 10% jump from 71% in 2014.

Africa remains the fastest-growing mobile phone market in the world, and is on track to have 725 million smartphone users by 2020, according to a 2016 report by the Global System for Mobile Communications Association or GSMA – a trade body representing the interests of mobile operators worldwide.

The majority of cell phone users in Africa are not using smartphones. Across seven countries – Ghana, Kenya, Nigeria, Senegal, South Africa, Tanzania and Uganda – only 15% of respondents reported having a smartphone in a 2014 survey by the Pew Research Center, a “fact tank” based in the United States that informs the public about the issues, attitudes and trends shaping the world. Instead, until recently, many Africans used “feature phones”— lower-cost mobile phones with limited capabilities.

According to one study, however, by 2019 feature phones will account for only 27% of Africa’s mobile handset market. The market for smartphones – fuelled by handsets priced at under $100 per unit – continues to grow.

A recent report by the global technology consulting firm International Data Corporation predicts smartphone shipments will top 155 million units by the end of 2015 in the Middle East and Africa – after increasing by 66% during the first quarter of 2015.

Feature phones are equipped to handle calling and messaging, as well as basic text-based apps, which are generally tailored to address a community’s specific needs. One prominent example is M-Pesa, the popular mobile money system in Kenya that allows users to store money on an account on their phones and make payments via secure SMS text messages.

Other innovative apps range from a South African start-up called Livestock Wealth, used to buy and sell cows, to M-Kopa – an expansion of M-Pesa used in Kenya, Tanzania and Uganda to generate solar electricity for domestic purposes and, of course, to recharge cell phones.

According to GSMA, mobile services accounted for 6.7% of the continent’s GDP in 2015, largely due to their ability to stimulate financial development. For example, farmers can now, by sending a message to a code, find out market prices for crops before going to market, says Ernest Acheampong, a research analyst at the African Technology Policy Studies Network, based in Nairobi.

“Mobile phones have really changed the face of how we do business in Africa,” Acheampong told Africa Renewal.

A major reason for cell phones’ ability to transform Africa so successfully is that they serve as the primary platform for internet access. internet penetration reached 29.3% on the continent in 2016, according to data from ITU.

Thanks in part to submarine internet cables lining the continent’s coasts, internet access has become more affordable and has increased in quality since the first cable in 2002. High-bandwidth undersea cables enabled countries to upgrade from 2G to 3G technologies, and even 4G/LTE in Addis Ababa and Nairobi.

GSMA foresees 80% of the African continent being connected to 5G internet networks by 2022.

Mobile phones coupled with internet access have allowed governments to put their services online and digitise their records. Rwanda bills itself as the continent’s leader in complete digitisation. For the past 15 years, the country has been working to digitise its education, healthcare and economy, and now it is pushing to be Africa’s first cashless society in the public sector; it is already paying its government employees electronically.

In late 2015 the government in Kigali rolled out Irembo, an e-platform billed by Rwandans as a one-stop shop for government services and applications. The online portal offers a list of 44 services, including registration for birth certificates and driving licences, passport applications, and it accepts a variety of digital payment methods.

The greatest obstacle to digitising Africa is financial. Despite the price of smartphones dropping to under US$100 in 2015, that amount is still high for Africa’s poor, and the added cost of data plans is often prohibitive.

Remote areas in Africa face additional challenges, as it is often difficult to connect these regions to the internet due to poor infrastructure and lack of funding. Investors are hesitant to finance internet cable expansion into rural areas, since the profit margin is lower than in urban areas.

Suveer Ramdhani, the chief development officer at Seacom, a pan-African internet service provider based in Mauritius, says private-public partnerships are the best way to combat this, as they force private companies to duplicate in remote areas the infrastructure that they have produced for urban areas.

Mobile phones and mobile platforms have also become dynamic tools for promoting democracy during elections in Africa, as they can be used to quickly communicate results, hot spots where electoral violence may occur and general election information, a major step towards encouraging transparency. Experts agree that they are also crucial in efficiently organising demonstrations and other political activities.

However, the power of information is not missed on certain African governments, some of which took to shutting down networks or certain websites during elections and other politically sensitive periods. In 2016, Cameroon, Chad, the Democratic Republic of the Congo, Gabon, Gambia, the Republic of Congo and Uganda blocked access to social media, while others, such as Ethiopia, Madagascar and Tanzania, introduced censorship legislation.

One initiative to circumvent such blocks comes from the Tor Project, a non-profit creating free software to enable anonymous communication. Its mobile app, OONIProbe, works by detecting censorship and allowing users to access restricted content anonymously.

While some aspects of Africa’s digital revolution are still lagging, the continent as a whole is looking towards the future.

“The prospects are great. You have a lot of interest in people developing innovations that are related to mobile technology,” said Acheampong cheerfully.