Nearly 5,000 farmers in Burkina Faso, Cameroon, Ghana, Senegal, and Sierra Leone are exporting organically-grown produce to Europe, after gaining organic and fair-trade certification with help from the U.N. Food and Agriculture Organisation (FAO).

The programme focuses on all stages of production from planting and harvesting to packaging and promotion, increasing the profitability of farmers who previously struggled to afford costly chemical fertilisers. 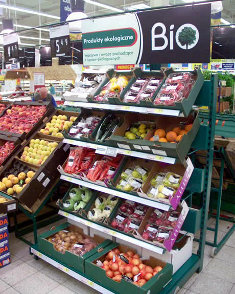 Demand for organic produce is growing in Europe.

A total of 30 small-scale pineapple farmers in Ghana saw sales grow from 26 tons to more than 115 tons after gaining their organic certification.

“The market for organic foods has been growing very rapidly,” he added. “Even though there has been a slow down because of the economic crisis, but it is still growing much faster than the market for conventional foods.”

Liu says the United Nations expects demand for organic foods will grow by between 5% and 15% annually during the next five years. And African farmers are well positioned to benefit from more people eating healthier food.

“There are opportunities for small farmers in Africa in this market for some tropical products that cannot be grown in North America or Europe, for example products like organic cocoa or organic sugar, organic fruits and vegetables,” explained Liu. “And usually there is a price premium for organic products. The price is a little higher than the price for conventional foods.”

Some farmers who are not in the programme have begun adopting organic farming techniques in hopes of joining small organic cooperatives that are beginning to negotiate long-term contracts with European organic and fair-trade wholesalers. – VOA