Africa’s growing consumer base and its US$1.9 trillion total purchasing power is old news if you are a regular reader of How we made it in Africa. For businesses operating on the continent, this consumer market holds untapped economic opportunities and potential. However, African spenders are created around their respective economic and technological environments and developing trends are constantly shaping the way businesses are targeting consumers. 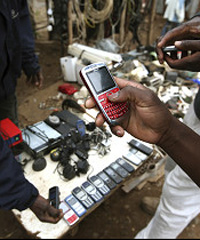 Kenyan mobile subscribers with counterfeit phones have been “plugged off", leaving an estimated 2.4 million Kenyans in need of a phone.

Facebook has become a shopping portal for the upper-middle class where upmarket stores in Egypt have failed to satisfy their hunger for fashion, according to Daphne Kasriel-Alexander, consumers editor at Euromonitor. Most consumers of Facebook fashion are young women with cash.

“In the Facebook shopping world, the group administrator is in charge of everything from purchasing to shipping and taxation, making it much easier for cash-rich but time-poor consumers to shop,” said Kasriel-Alexander.

In May 2012, the Egyptian Ministry of Information reported that Facebook users in Egypt had reached 10.7 million. With a population of around 80 million, roughly 13.4% of Egyptians are on Facebook, putting Egypt at 20th place in the world in terms of Facebook usage.

“Ghana’s first American-style shopping mall in the capital, Accra, is changing the way Ghanaians spend their free time,” said Kasriel-Alexander. The shopping centre, which features a number of South African and international brands, is developing a mall culture in Accra. “A typical scene on a weekend could be from a shopping mall anywhere in the USA – boys in skinny jeans, girls wearing hot pink lipstick, families eating pizza at a food court.”

Cordie Aziz, a young American who moved to Accra over a year ago to start a business, has blogged about the Westernised mall culture in the city. “Each day, I am amazed about how American the life in Accra is,” said Aziz. “Women in Ghana have abandoned their traditional style clothing for modern day suits and dresses, some made of fabrics that aren’t even conducive for the weather.”

“The men have also been equally hypnotised by the West. The younger generation has picked up on skinny jeans in bright, vibrant colours with the shoes to match,” continued Aziz. “They even seem to identify with the words of artists like Rick Ross and Lil Wayne, though many of them have never even been close to setting foot on American soil.”

The majority of modern retail space has been developed in Accra, due to better infrastructure and access to a large population. The Accra Mall, established in 2007, is conveniently located with surrounding residential and commercial areas and is five minutes away from the Kotoka International Airport. Euromonitor’s research has also noted that Ghana’s retailing achieved 14% value growth between 2006 and 2011, which reflects the strength of fast-moving consumer goods (FMCG) companies in the country. As an English-speaking nation, Ghana has close ties with US and British businesses.

“Developers forecast more of such malls would spring up across the country replacing the beach as a place for middle-class Ghanaians to spend their weekends,” stated Kasriel-Alexander. “According to Euromonitor International statistics, Ghana‘s growth expanded to 13.6% in 2011 from 7.7% the year before – driven by new oil production and the construction sector.”

By 30 September an estimated 2.4 million Kenyan mobile subscribers with counterfeit handsets faced being “plugged off” by the Communications Commission of Kenya (CCK) unless they acquired genuine handsets in time, according to Kasriel-Alexander.

Latest figures reported on BBC News and allAfrica.com suggest that 1.5 to 1.9 million subscribers have since been affected by the switch-off.

The CCK ordered telecom companies to block counterfeit phones from accessing Kenyan mobile networks a year ago but this date was postponed four times until the end of last month.

“The switch-off by the Communications Commission of Kenya will be a costly affair for consumers who will have to acquire new handsets, a significant number of whom are said to have bought the fake phones unknowingly,” Kasriel-Alexander pointed out.

South Africans have a fear of missing out

“According to a nationwide survey by Pharma Dynamics of 3,000 respondents aged between 15 and 50, released in early July 2012, 62% live in ‘constant fear’ of missing out on something more exciting that what they are doing,” said Kasriel-Alexander.

This “fear of missing out”, known by the acronym FOMO, means that South Africans are constantly on their phones checking for emails and social networking updates. According to Kasriel-Alexander’s research, this behaviour includes “the inability to put away one’s mobile phone, excessive phone texting even while driving, tweeting on the toilet and showing up at events uninvited”.

“South Africans are the most enthusiastic tweeters in Africa (with over 5 million tweets), according to a report released by UK-based research firm Tweetminster in January,” said Kasriel-Alexander. “Kenya came in second place, generating 2.48 million tweets – followed by Nigeria (1.67 million), Egypt (1.21 million) and Morocco (0.75 million).”