“The mobile industry in Africa is booming,” says the GSMA in its recent African Mobile Observatory report. 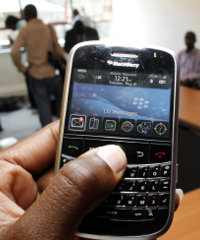 Africa, with over 620 million mobile connections, has overtaken Latin America to become the second largest mobile market in the world, after Asia. Over the past decade, the number of mobile connections in Africa has grown an average of 30% per annum and is expected to reach 735 million by the end of 2012. (It should be noted that many Africans use more than one SIM card, meaning that the number of connections mentioned in the report is not necessarily the same as the actual mobile phone users.)

Strong competition between mobile operators has driven down prices and increased penetration. Price wars have been common across the continent as operators compete for market share with innovative revenue and pricing options. According to the report, operators have reduced prices an average of 18% between 2010 and 2011, making mobile connectivity more broadly affordable to the masses.

Ninety-six per cent of subscriptions are pre-paid with voice services currently dominating, however, the uptake of data services is increasing rapidly. In Kenya, for example, data revenues, including SMS, have increased by 67% over the last four years and now represent 26% of total revenues.

The mobile industry contributes US$56 billion to Africa’s economy, equivalent to 3.5% of total gross domestic product (GDP). It is estimated that the industry employs over five million Africans directly and indirectly.

However, there remains significant untapped potential. According to the report, 36% of Africans, within the 25 largest African mobile markets, still have no access to mobile services. Projections indicate that raising the whole region to 100% mobile penetration, could add an additional US$35 billion in GDP.

The mobile industry in Africa has led to economic development far beyond its immediate domain. Operators have driven the emergence of a unique industry in innovative mobile services in Africa. Mobile value-added services have been launched throughout the continent to enable and support agriculture, banking, education, healthcare and gender equality. In particular, the emergence of mobile money transfers and mobile banking puts Africa firmly at the forefront of the global mobile money industry. Beyond mobile services, the mobile industry is also contributing to rural electrical distribution with lower carbon emissions and facilitating the work of NGOs across the continent.