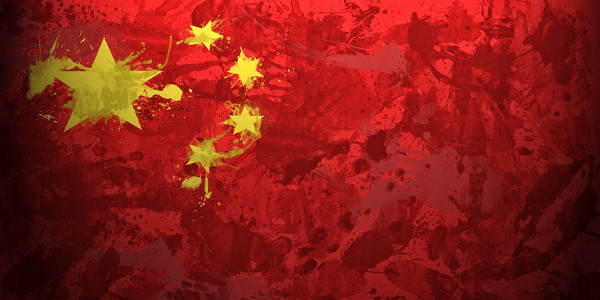 It has become clear that the supercharged days of double-digit growth in China are over. The world’s second-largest economy is now “rebalancing” from one driven by over-investment towards a consumer and services driven economy.

This changing economic structure and transformation – one that is less fixated on infrastructure megaprojects, and as a result less resource-intensive – has been overdue for some time.

While put on hold during the aftermath of the global financial crisis, when Chinese-engineered stimulus packages helped prop up growth in the Chinese economy (to the tune of almost US$600bn) and by extension soothed the detrimental impacts of a slump in global commodity demand, the impact of structural reforms are now being hard felt in global markets, and so too in resource-rich African economies.

Sub-Saharan African (SSA) economies in particular have been overly reliant on Chinese resource demand for their economic performance. Over the past decade and a half, an interdependence or “growth coupling” became evident between China and SSA. 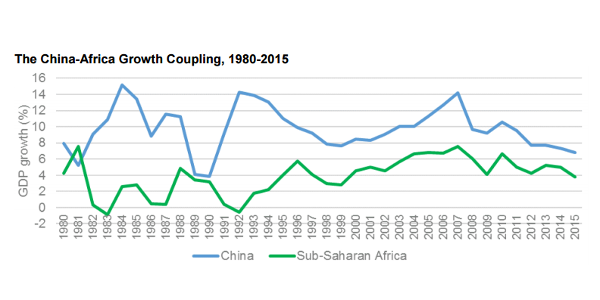 The China-driven commodity supercycle saw SSA’s growth trail that of China from the 2000s until 2015. In fact, a growth correlation of 85.5% is visible between China and SSA’s GDP growth over that period, where Africa’s growth has been underpinned by Chinese resource demand; and conversely China’s resource-intensive investment-orientated growth path has been dependent on Africa’s capacity to supply commodities.

The winds of change are underway now and them resultant implications will continue to play out over the medium to long-term.

To put things into perspective, China’s growth remains robust at around 6%. Yet, this growth “slowdown” from previous double-digit rates, coupled with the bursting of China’s short-lived stock market bubble (a market that however has always been divorced from the real growth story), capital outflows and currency devaluation has seen waning confidence in the health of the Chinese economy.

Nonetheless, China continues to be a key driver of global economic growth, and the recalibrations in its economic makeup will certainly test the resilience of its economy, as well as redefine the commercial relationship and terms of engagement of this Asian giant with key commercial and trading partners, including the African continent.

For example, for African states, a further fall in China’s currency could have a number of knock-on effects, such as eroding African economies’ relative export competitiveness by boosting that of China’s exports, but also lessening the purchasing power of Chinese companies abroad. It could also see possible further downward pressure on previously inflated and already low commodity prices, including oil. This could add insult to injury for countries overly reliant on such rents to try and balance their books in a $30 oil price environment.

Another key challenge remains China’s industrial overcapacity. While primarily in the country’s north-eastern region where heavy industry is dominated by the state, this overcapacity is being exported, most recently under the One Belt, One Road initiative – the knock-on negative impact on South Africa’s steel sector, for example, has been all too apparent. Driven by mostly state-owned firms which have distorted the market (the New York Times previously labelled these “zombie” companies), it is likely to take at least a handful of years before this excess capacity is reduced through consolidation in the marketplace. Unfortunately, this cost-of-state intervention in China in manufacturing and industrial sectors has very often been borne by other countries’ manufacturing sectors which are being hollowed out by “mispriced” product exported from China.

Chinese policy-makers will find it more and more difficult to manage their rapidly marketising economy and globalising capital markets. Balancing the forces of protection, state-ownership, market reform and productivity will be incredibly difficult for Beijing. The ham-fisted handling of the recent stock market turbulence and currency devaluation is proof of this and the inherent and unsustainable contradictions in the Chinese system. The government’s stimulus efforts will be more “acupuncture” than “big-bang” but the trend is toward the market, not the state.

African countries and companies are now looking to make sense of China’s changing realities, in the midst of which the sixth Forum on China-Africa Cooperation (FOCAC) meeting (the second “summit” at heads of state level) took place. Hosted in Johannesburg, South Africa, in early December 2015 the meeting was themed “Africa-China Progressing Together: Win-Win Cooperation for Common Development”.

As a conduit for China’s foreign commercial policy towards the continent – the triennial FOCAC meetings have supported political, security, economic, commercial, social as well as developmental engagements with the continent.

However, a shifting emphasis in the engagement dialogue was visible this time around; one that saw the need for a more balanced model of commercial engagement, thus placing a greater focus on non-resource sectors in the Sino-African corridor of business. The commitments under the Johannesburg Declaration speak to this, as well as continue to focus on supporting infrastructure, capacity building and funding mechanisms.

Chinese President Xi Jinping made a total investment pledge of $60bn to African counterparts – a three-fold increase of commitments made at the fifth FOCAC meeting in 2012, and composed of concessional loans, grants, zero-interest loans and export credits.

One part of this sizable funding commitment was the announcement to create the US$10bn China-Africa industrial capacity cooperation fund to support investments into value-adding sectors including manufacturing, hi-tech, agriculture, energy and infrastructure by Chinese firms in Africa. The fund was launched in January 2016.

The now more well-established China-Africa Development Fund (CADFund) which opened doors in 2007 following the 2006 FOCAC commitments, received the pledge by President Xi to increase its capitalisation, from $5bn possibly to $10bn. The fund has been largely linked to resource and commodity investments, but also active in industrial and infrastructure-focused projects.

The various funding pledges will assist to finance the 10-point cooperation plan outlined by President Xi, which includes:

1. Industrialisation: focusing on the development of industrial parks, and capacity building through vocational education centres, and training opportunities in China.

6. Trade and investment facilitation: focusing on facilitating greater and deeper trade cooperation on capacity, standards, customs, and certification in the trade corridor.

7. Poverty reduction and public welfare: focusing on projects supporting women and children, as well as the cancellation of debts.

For Africa, the China-enabled “golden growth decade” has passed. As China rebalances, so must Africa. As it is important to realise that there will never be another China and the disruptive and enabling impact it has had on commodities markets and resource-driven economies will not be repeated, a new growth model will need to be sought, and fast.

Already, over the past decade, the Sino-Africa relationship has matured from one of political courtship to bolder business-to-business engagements. As “China Inc’s” investment considers a greater spread of sectors and opportunities, by a broader variety of players, so too should Africa be thinking about China’s sectors of the future. African businesses will need to refocus their value proposition for doing business given China’s own internal recalibration.

This article was originally published by Deloitte. You can find the original document here.