African leaders face tough challenges in developing, upgrading and maintaining the continent’s infrastructure for transport, energy, water and information and communication technology. Despite efforts by governments and the private sector to pump money into building a reliable infrastructure, there is still a huge financial gap. 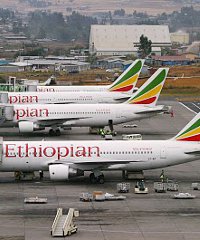 Until recently, it was not uncommon for passengers flying between two African cities to transit through Europe. It was cheaper and faster, for instance, for passengers travelling to Ethiopia from Côte d’Ivoire to fly first to Paris with Air France and then catch a connecting flight to Addis Ababa. With no direct flights linking their capitals, most African countries had to rely on flights from their former colonial powers to connect to each other. It still happens today but on a smaller scale; flying in Africa is improving, albeit slowly.

Yet poor safety records continue to bedevil its aviation industry, thanks to low standards, inert supervision and old and poorly maintained planes. The airports too suffer from poor maintenance and offer shoddy and expensive service, says the International Air Transport Association (IATA), the global airlines group. While revenue from airports and air traffic is probably adequate to finance essential investments, politics and weak management are interfering with how the money is used.

Still, a major study by a consortium of organisations led by the World Bank concluded that generally the capacity of air transport infrastructure “is not a serious problem”. The 2009 study, Africa’s Infrastructure: A Time for Transformation, said the number of airports was adequate and there were enough runways to handle traffic. It noted, however, that while African carriers are upgrading their fleets, progress with air traffic controls remains sluggish.

Poor infrastructure undoubtedly adds to huge running costs. Airports are often stuffed with high-charging monopoly suppliers, in addition to other government taxes, says IATA. For example, Senegal increased its landing charges by 13% in 2012 on top of an airport development fee of about US$68 per passenger – the highest in Africa. Critics say some African countries are less transparent with how they use the money from these charges. Several other countries have development charges of up to $50 per passenger.

There is little relief from airport operating costs: fuel taxes are high, so are landing and take-off charges. For example, fuel prices in Africa are on average 21% higher than the global average. Worse still, Africa has the highest airfare costs in the world per kilometre, pushed up partly by high taxes and partly by lack of competition or relatively low air traffic volumes on many routes.

Because of poor safety records, African airlines often face higher leasing costs than other carriers. According to The Economist, a European airline, for example, could be charged $180,000 a month to lease a five-year-old Boeing 737, but a Nigerian carrier could be slapped with a bill of up to $400,000.

The continent’s aviation industry further suffers from lack of skilled personnel, worsened by a brain drain that has seen pilots and technicians joining airlines with better bottom lines. Boeing, a US aircraft manufacturer, estimates that Africa will need 14,500 new pilots and 16,200 technicians through 2031, according to IATA.

“African airlines have to raise their game and their remuneration packages to retain pilots, engineers, cabin crew and airline managers,” says Mike Higgins, IATA regional vice-president for Africa. Ethiopian Airlines, for instance, is handling it creatively.

“Instead of complaining, why don’t we train enough people not only for our airline but also for the region?” Tewolde Gebremariam, the airline’s CEO, told Airlines International, an IATA publication. His airline has expanded intake at the Ethiopian Aviation Academy in Addis Ababa from 200 to 1,000 students per year.

Notwithstanding the litany of problems it is confronting, Africa’s aviation industry is beginning to pick up, boosted by the continent’s economic growth. “Nowhere is the potential for aviation greater than on the African continent,” Tony Tyler, head of IATA, told participants at the group’s annual meeting last year in Cape Town. The aviation industry supports some 6.7m jobs in Africa and generates $67.8bn in economic activity, says the World Bank-led report.

By 2030, more than half of Africa’s population will be living in the cities and, according to the African Development Bank, about 700m will join the middle class over the next decades. This burgeoning middle class will produce more customers who will find it more convenient and affordable to fly than use alternative transport. More competition among low-cost airlines and increased traffic should also result in affordable airfare.

Africa’s economic powerhouse, South Africa, has the most developed air transport infrastructure network and aviation market in the region. Its three major airports in Johannesburg, Cape Town and Durban got face-lifts ahead of the World Cup in 2010 and its national airline, South African Airways, is the largest in Africa, with connections to over 50 cities across the continent.

To realise their full potential, African governments have adopted the Common African Civil Aviation Policy. It aims to establish a well-integrated transport system that would link air travel to other means of transport so that passengers and cargo can move seamlessly – and avoid connecting trips outside the continent just to travel within the same region.