When thinking about regional integration in Africa we often think first of trade policy, telecommunications, ICT, and road infrastructure. But on a continent larger than China, India, the US, and Europe combined, air transport is inevitably going to play a key role in facilitating integration. For Africans to interact and do business with each other, they need to get there. 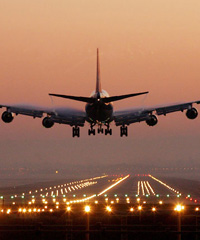 Moreover, as incomes rise, patience with long and arduous road journeys is bound to diminish. On a personal note, I thought little of taking a 24-hour bus ride in East Africa as a student, but as a working professional I very gladly pay extra to take a one-hour flight instead.

However, Africa accounts for less than 2% of global airline passenger traffic and about 1% of global airlines’ cargo. The challenges facing the African aviation industry range from strong state protectionism, lack of an enabling environment for new investors, high taxes and charges (above comparative world averages), a poor safety record due to ageing fleet and insufficient regulatory supervision. Likewise, a lot of air transport infrastructure across the continent is in need of upgrade.

So how do we get safer, more efficient and cheaper airlines?

One of the key problems is a lack of competition which contributes to high fares. Although in some cases low passenger volumes may create natural monopolies, in many countries competition is artificially restricted by making it difficult for foreign airlines to access certain routes, in order for governments to support their own national carriers. This is despite an agreement more than 13 years ago to “open the skies”. The Yamoussoukro Decision (1999) was signed by 44 countries, who agreed to liberalise intra-African air transport, including allowing non-national airlines to land and take passengers to a third country – so-called “fifth freedoms” of the air. Implementing this decision could do much to reduce fares and increase air traffic across the continent.

All of this sounds fine in theory, but what about in practice? A comprehensive 2010 World Bank study led by Charles Schlumberger looked at a number of specific examples of what happened when routes have been liberalised in Africa. When the Nairobi-Johannesburg route was fully opened up in 2003, passenger volumes increased 69-fold. When the domestic South African market was liberalised, passenger volumes increased by 80%. On average in the Southern African Development Community (SADC), routes that were liberalised saw fares drop by 18%. The study estimates that full liberalisation in the SADC region would increase passenger volumes by around 20%.

A more recent study was presented at the African Development Bank’s (AfDB) African Economic Conference by Megersa Abate, an Ethiopian transport economist, looking at air transport routes to and from Addis Ababa. While Abate did not find any impact of liberalisation on prices, he did find large increases in the number of flights – up to a 40% increase. He concludes that in the long run competition is likely to reduce prices. Even without price drops, more flights and more routes are clearly needed.

Despite these potential gains, at present over a quarter of air routes in Africa are served by only one carrier. In total up to 70% of air transport is served by a monopoly carrier. Why are countries slow to “open the skies”? Too often it comes down to simple protectionism, driven by fear that the national carrier won’t be able to compete with the continent’s big players from Kenya, Ethiopia and South Africa as well as other competitors from the Gulf and beyond. Earlier in 2013 it took the total collapse of Air Malawi for Kenya Airways to be allowed to operate flights between Malawi and other countries, despite “fifth freedom” rights already agreed to by Malawi through the Yamoussoukro Decision. Individual airlines and countries should not need to make ad-hoc bilateral agreements, when an agreement for open competition continent-wide already exists.

In addition to restricting competition, many countries also provide generous subsidies to their national “flag” carrier. So in addition to limiting the number of flights available, governments then spend scarce resources propping up inefficient airlines. The president of Zambia recently called for the establishment of a new national airline, while the former transport minister noted the challenges that prevented financial viability of the national airline over the years. Achieving success, efficiency and profitability calls for smart partnerships with the private sector and strategic alliances within the sector.

The challenge of financial viability and efficiency is not confined to Africa alone. Major European and American airlines have folded or receive billions in state aid, capital injections, and debt write-offs – demonstrating that the airline industry is fraught with difficulties. Moreover, developed and emerging markets have witnessed the growth of low-cost carriers which are allowed to compete on the same routes with the major carriers, thereby driving down prices. To be sure low-cost carriers in Africa face a host of additional challenges including high costs due to poor safety records and slow courts, but implementing “open skies” would be one less thing for them to worry about.

Lower airfares and more flights could generate a whole host of new economic opportunities. The successful flower industries in Kenya, Ethiopia and elsewhere rely critically on air transportation, as do other similarly perishable agricultural goods. International tourism earned Africa US$43.6b in 2012, and directly created eight million jobs. This could grow with increased and cheaper air transport.

Economists like to say that there is no such thing as a “free lunch”. But for the cost of some short-term political pain, Africa could gain some big economic and social benefits.

Lee Crawfurd is a development economist at Oxford Policy Management, where he is currently focused on education policy strategy and evaluation. This article was first published by the African Development Bank.