Last year, a record breaking 1.1 million tourists visited Kenya, undoubtedly drawn to one of the country’s most priceless assets – its wildlife. 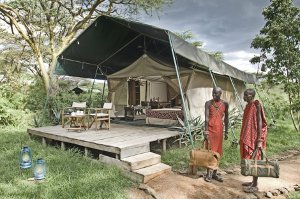 A guest tent at one of Gamewatchers Safaris's camps nearby the Maasai Mara National Reserve.

For decades, the lumbering elephants of Amboseli and Tsavo National Parks, the majestic lions roaming the plains of the Maasai Mara, and the rare rhinos of the Aberdares have been a key driver of one of Kenya’s largest industries. In 2010, tourism brought nearly Ksh. 74 billion (US$740 million) into the economy, and with current numbers showing over a 15% increase in tourists during the first quarter of 2011, this year may be another record breaker.

Yet despite the numbers of spectators increasing, the numbers of wildlife has been decreasing at an alarming rate. Since monitoring began in 1977, Kenya has seen an astonishing two-thirds of its large wildlife vanish, both in and outside of the country’s protected areas.

Across the country’s vast plains, forests, savannahs and rangelands, a 500% increase in human population since the 1960s has put enormous pressures on land, resources, and wildlife habitats, increasing human-wildlife conflict and forcing wildlife into smaller and smaller areas. At the same time, concentration of tourism within the actual reserves has surged to unsustainable levels. Back in the 1960s, the entire Mara reserve had just one lodge and 100 beds. Now, there are over 160 camps and lodges, and a staggering 7,000 beds. It’s often common, people say, to see thirty safari vehicles chasing one cheetah.

One of the major factors causing the decline in animals, is the issue surrounding incentives for preserving wildlife. In 1977, Kenya banned all “consumptive uses” of wildlife (such as cropping, culling, ranching, and hunting) leaving wildlife tourism as the only economic incentive for keeping wildlife, which is legally owned by the state, on private or communally owned land. Most claim that the “trickle down” effect of tourist dollars to the communities around wildlife areas is minimal.

Since 2006, the Kenyan government and Kenya Wildlife Service (KWS) have been drafting a new Wildlife Act, yet it seems that unless they can expand the area of the parks – a true political nightmare given the sensitivity of land politics in Kenya – or re-evaluate consumptive uses, sometimes referred to as “wise use” policies, it’s up to the private sector to help protect the wildlife.

In comes the private sector

It is from this private sector imperative that wildlife conservancies, a model of private-sector conservation efforts, are showing tremendous success in the Maasai Mara, where some of the most drastic declines in wildlife have been recorded.

In the early 2000s, the land surrounding the Maasai Mara National Reserve was subdivided from communally owned “group ranches”, into over 65,000 private landholdings. Nearly 70% of Kenya’s wildlife lives outside of the protected reserves, and the majority can be found on these private landholdings surrounding the parks. Yet since wildlife is owned by the state, it has no real value to landowners or communities, unless tourists pay to see it.

That’s when Jake Grieves-Cook, owner of Gamewatchers Safaris, and former chairman of the Kenya Tourist Board, decided to step in. Starting in 2005, he banded together with several tour operators, and worked with the local landholders to secure leases for large tracks of private land, anywhere between 2,800 and 8,000 hectares, to preserve the natural ecosystem for wildlife viewing.

The conservancies set up by Grieves-Cooke pay Maasai landowners around Ksh.3,750 ($37.5) per hectare a year, less than one-third of the cost that landholders could get for leasing the land for farming. However, the incentives for the landowners are certainly there. They are guaranteed a steady income (regardless of if tourists come), and many Maasai landowners see the conservancies as “protecting” their land, leaving it in its natural state and keeping it secure from poachers, loggers, and overgrazing.

According to Hugo Wood, a large scale maize farmer who has been leasing land from the Maasai for farming since the 70s, the farmland has also “reached its limit”, and most of the land that the conservancies are adding wouldn’t be profitable for agriculture.

Across the Mara ecosystem, Grieves-Cook’s company Gamewatchers co-owns five conservancies, each with one of his company’s eco-friendly Porini Camps.

“I’m not ashamed to make profits, I want to make profits,” says Grieves-Cook. “But I want to come up with a way that’s a win-win for everybody. Everything has been previously skewed towards the tourist industry, not the people.”

While most of the young conservancies haven’t yet shown a drastic statistical increase in wildlife, nearly all conservation experts in Kenya agree that the model is a step in the right direction for private sector intervention in conservation. In the conservancies, poaching has all but ceased, natural vegetation has re-grown, and the “trickle down effect” of tourism is actually trickling down. Beyond paying landowners a yearly fee to simply leave their land undeveloped, the conservancies also train and employ local community members as rangers, guides, and staff, and contribute to a trust that works on community development projects in the area.

These private conservancies may not be the ultimate saviour for Kenya’s massive wildlife decline, but they are certainly a sign of progress towards preserving one of the country’s most valuable assets.