The landlocked, East African country of Rwanda has an economy that relies heavily on agricultural exports, mainly in coffee and tea. 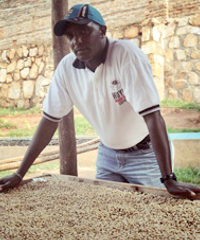 However, the fluctuating price of coffee on the international market has posed a threat to Rwandan coffee producers and exporters. In early 2011, the coffee price on the international market hit a high, but has since fallen considerably. To reduce the financial insecurity caused by fluctuating prices, many of the industry players in Rwanda have turned their focus to speciality coffee, for which Rwanda has been developing a reputation.

One speciality coffee producer and exporter is David Rubanzangabo, founder and managing director of Huye Mountain Coffee. He told How we made it in Africa that to be marked as speciality, coffee cherries must be fully washed, carefully assessed and must score above 85 points by trained coffee experts or cuppers. Rubanzangabo added that the product must also be certified as the international market wants to know where the product comes from and how it makes its way onto the shelves.

Rwanda’s rainfall, hilly geography, altitudes and volcanic soils make it an ideal place to grow coffee. It also has a large agriculturally-based workforce with between 70% and 90% of the workforce being engaged in subsistence farming. Last year, How we made it in Africa reported that nearly 27% of Rwandan coffee exported is marked as speciality – up from zero in 2000.

The turnaround in the quality of coffee production in Rwanda is a result of the industry being privatised in 2001, as well as through the work of several international development projects such as USAID-funded PEARL and SPREAD. In 2000, these projects worked to kick-start a speciality coffee industry by building new coffee washing stations, organising farmers into cooperatives and training local farmers, cuppers and agronomists on quality. Before setting up his own operations, Rubanzangabo was the head agronomist at SPREAD.

Despite speciality coffee making up just 3% of the global coffee market, there is a demand for it with it usually commanding an additional 15%-25% premium on top of current market prices for ordinary coffee.

For Rubanzangabo, who has his own plantation and works with small-scale farmers in the area, there are two reasons why he has chosen to cater to this niche market. Firstly, he said his company cannot supply the ordinary coffee market as the export market require large quantities of coffee to make production financially viable and, like many other coffee producers in Rwanda, Rubanzangabo does not have enough land to allow large-scale production. He added that the condition of the soil in Rwanda is generally not of a high enough quality to support mass production and requires expensive inputs.

A focus on quality

During the Growing SMEs conference held in Kigali, Rwanda last month, which saw entrepreneurs in the region present their businesses to investors and seek advice from experts, it was mentioned that the average coffee tree is meant to produce 40kgs of coffee. Rubanzangabo said his trees generally produce only 10kgs-15kgs.

“That is why we are targeting the quality not the quantity.”

According to Rubanzangabo, the risk of fluctuating market prices for ordinary coffee is just too risky for most small-scale coffee producers and exporters in Rwanda. “That is why we want to target the speciality coffee market and not the ordinary… For me to produce two containers of high quality coffee is equal to someone who produces 10 containers of ordinary coffee.”

He added that by placing an emphasis on quality and focusing on niche markets, he has been able to develop longer term relationships with buyers, which reduces financial insecurity. He said he is now signing two year contracts with many of his international buyers.

Rubanzangabo exports his coffee products to the US, Australia and Japan. “And I think this year we are going to also have a market in Korea,” he said, adding that they package and sell the finished product locally.

Since setting up operations, Huye Mountain Coffee has grown from employing 60 workers in 2011 to 150 workers in 2013, of which 80% are women. Rubanzangabo advises other coffee producers in Rwanda and Africa to get the necessary certification for their produce, pointing out that this provides financial security in the international market as it means coffee cannot be sold for less than a certain amount.

“You have to conform to the needs of the market,” he emphasised. “If a market needs a certification, you have to do your best to get that certification.”