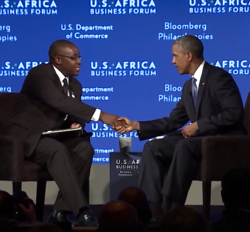 After a speech concerning the US’s commitment to Africa’s development through trade and business, Obama sat down with young Zimbabwean entrepreneur Takunda Ralph Michael Chingonzo (21), for a question-and-answer session. Chingonzo challenged Obama on a number of issues regarding the US’s relationship with Africa.

Chingonzo is the youngest Mandela Washington Fellow, the flagship programme of the Obama’s Young African Leaders Initiative (YALI). He is also the co-founder of Neolab Technology, a company working towards bringing free internet access to the public, and the co-founder of NeoEffect, a social startup empowering underprivileged youth through IT literacy in southern Zimbabwe. His third venture, Saisai Wireless, aims to offer “free” WiFi for the public by deploying hotspots in public transportation.

Chingonzo’s first question to the president looked at US sanctions on Zimbabwe which the administration refers to as “targeted” and are only aimed at companies and individuals with a connection to the Robert Mugabe government. According to Chingonzo, his startup requires technology from the US, and he has been meeting with US-based businesses. However, he explained he was “shocked” to discover that he was refused deals due to being Zimbabwean.

“This doesn’t make sense, and this is the exact same experience that other entrepreneurs that are in Zimbabwe have gone through… And I understand that sanctions that are imposed on entities in Zimbabwe, these are targeted sanctions, right? But then we have come to a point in time where we, as young Africans, are failing to properly engage in business with US-based entities because there hasn’t been that clarity. These entities believe that [all] Zimbabwe is under sanctions.

“So what really can we do to try and clarify this? To make sure that we, the young entrepreneurs, can effectively develop Africa and engage in business?”

Mugabe was one of just four African presidents not invited to the Summit. Zimbabwe is also excluded from the African Growth and Opportunity Act (AGOA), a US trade preference that allows duty-free entry for a wide range of African products.

Obama said the situation in Zimbabwe is unique. “The challenge for us in the United States has been, how do we balance our desire to help the people of Zimbabwe with what has frankly been a repeated violation of basic democratic practices and human rights inside of Zimbabwe? And we think that it is very important to send clear signals about how we expect elections to be conducted, governments to be conducted, because if we don’t, then all too often, with impunity, the people of those countries can suffer.

“But you are absolutely right; it also has to be balanced with making sure that whatever structures we put in place, with respect to sanctions, don’t end up punishing the very people inside those countries.”

The president suggested that Chingonzo, and all African businesses, communicate with the Department of Commerce and other US agencies.

“It may be that you and a group of entrepreneurs in Zimbabwe are able to meet us and propose certain projects that allow us to say that this is something that will advance, as opposed to retard, the progress for the Zimbabwean people.

“So what I suggest would be that we set up a meeting and we find out what kind of things the young entrepreneurs in Zimbabwe want to do and see if there are ways that we can work with you, consistent with the strong message we are sending about good governance in Zimbabwe.”

But Chingonzo then probed further: “The point of emphasis really is that, as young Africans, we want to converse with other business entities here in the US, and if these sanctions are really targeted then, in honest truth, they aren’t supposed to hamper the business that we are trying to engage in; the very development that we are talking about.”

Obama interrupted Chingonzo saying: “Well let’s see if we can refine them further, based on some of the things you are talking about.” And the topic was dropped.

Last week’s Summit also saw a number of US companies pledge “billions” in investments in construction, energy and ICT projects in Africa. Chingonzo commented that these investments often don’t benefit young emerging entrepreneurs struggling to break into the market. He asked Obama whether there has been any consideration in the structuring of these deals to support young African entrepreneurs.

Obama pointed out that finding financing and competing with established market players is difficult for startups anywhere in the world. “Having said that,” he continued, “what is absolutely true is that as we think about the billions of dollars that we are mobilising, we want to make sure that small businesses, medium-sized businesses, women-owned businesses… have opportunities.”

Obama added he wanted to make sure the US was “consistently looking out for opportunities” to partner with young entrepreneurs and make sure that investment doesn’t just benefit large companies.

Chingonzo also noted that while politics should not get in the way of business, governments often have to be lobbied to create policies for a more conducive business environment. He asked what business leaders and the private sector can do independently to create an economic environment that fosters growth and development.

Obama responded that governments help set the frameworks for markets to function effectively and are able to initiate large infrastructure projects (like roads and airports) that an individual business would find cost prohibitive. However, he added, as the private sector becomes stronger on the continent, governments will become more responsive to their demands. “America just wants to make sure that we are helpful in that process,” stated Obama.

“We are interested in Africa, because we know that if Africa thrives and succeeds, and if you have a bunch of entrepreneurs, they are maybe going to need supplies from us. Or maybe [in turn] supply us with outstanding products. They are going to have a growing middle class that wants to buy iPhones or applications from us. In turn they may provide us with services, and we can be the distributors for something that’s invented in Africa.

“And all of us grow at the same time. That’s our goal.”