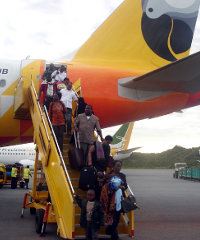 Passengers disembarking from a fastjet aircraft.

The airline is owned by London-listed fastjet Plc, which was born when UK-based pan-African investment group Lonrho spun off its aviation business, including East African low-cost carrier Fly540, into a new entity. It is expected that all Fly540 flights will eventually be rebranded to fastjet. Lonrho has a majority stake in fastjet, while easyGroup Holdings owns slightly more than 5%.

Fastjet’s aim is to bring true low-cost air travel to the African continent. According to the company, its rates start at as low as 20 US dollars plus taxes for those who book far enough in advance.

To see if these low rates are really available, How we made it in Africa attempted to make a booking for the 1 hour 20 minute flight from Tanzania’s commercial hub Dar es Salaam to Kilimanjaro on 14 March, two months in advance. We were offered a rate of 48,000 Tanzanian shillings (slightly more than 30 dollars). However, this rate excludes tax of 11,040 shillings, which brought the total amount to 59,040 shillings (about 37 dollars). Checking in one bag with a maximum weight of 20 kg is an additional 8,000 shillings (around five dollars).

While taxes and the cost of checking in luggage, do bring fastjet’s prices up considerably, it is still much cheaper than the rate offered by Tanzanian carrier Precision Air, 41% owned by Kenya Airways, whose online booking system quoted a total of almost 222 dollars for the same flight on the same date.

So how does fastjet manage to offer such relatively low fares? In a recent blog article the airline outlined three reasons why it can keep its fares low:

The airline currently only operates flights in Tanzania, although new routes to Kenya, Uganda and Zanzibar have been announced on the company’s website.

“The acquisition of 1time supports fastjet’s growth into a pan-African low cost carrier and the synergies with fastjet’s existing operations will potentially increase the number of available route networks from South Africa into the rest of Africa. 1time will be rebranded as [the] fastjet brand and sold through fastjet.com,” commented fastjet CEO Ed Winter in a statement on 19 December.

If the 1time deal goes ahead, fastjet could face significant competition from established South African budget carriers such as Kulula and Mango.

Interestingly, fastjet Plc chairman David Lenigas, last month announced that he will draw a salary of only one British pound per annum. Lenigas also said that he plans to establish a foundation with any profits he may make from his 20 million share options in fastjet to enable underprivileged children in Africa to experience the joys of flight.

With rising competition, high taxes and a general lack of market liberalisation in many African countries, fasjet’s grand ambitions will definitely not be a walk in the park. The company will, however, be an interesting one to watch.