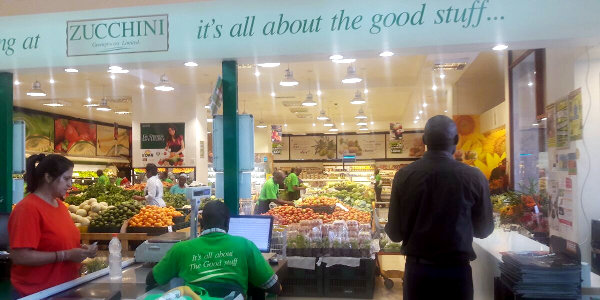 A Zucchini Greengrocers outlet in Nairobi

The retail of fruits and vegetables in Kenya is dominated by small traders operating from tiny shops and public markets. At the capital, Nairobi’s largest informal wholesale fresh produce market, known as marikiti, consumers can purchase a wide variety of local and imported fresh goods.

However, they have to contend with congestion, large crowds, noise, the sight of piles of garbage and the stench of rotting produce. The script is almost the same in many other such markets.

Although the majority of the population – even in urban centres – still buy fresh produce from informal sellers, formal retail of fruits and vegetables is picking up, particularly in Nairobi.

Zucchini Greengrocers is a retail business that focuses predominantly on fresh produce. Targeted at high-income consumers, Zucchini operates four stores, and is about to open its fifth.

The business was started 25 years ago by entrepreneur S.S. Jandu when a local supermarket offered him a corner in their store to sell fresh produce.

“I was fresh out of college and ready to try anything,” says Jandu, a biochemist by training.

Supermarkets are the biggest competition for Zucchini, but manager George Osiko says it has an advantage in the form of shorter queues, a wider variety of produce and greater focus on consistent supply. Zucchini’s outlets are located in shopping centres where supermarkets also have a presence. The idea is that consumers shop for other products at supermarkets, and get their fresh produce at Zucchini.

“We attract a larger crowd when we are in the same location with other retailers,” says Osiko.

Zucchini stocks a mix of fruits and vegetables sourced both locally and internationally. But the retailer is expanding its portfolio. At its largest outlet, Zucchini sells cheeses as well as juices, sandwiches, freshly-baked bread and coffee.

“We are trying to be like a gourmet store, but one that is affordable. We have changed the concept a little bit to include other things like fresh juices, dairy products and bakery products in addition to the fruits and vegetables. We are not a supermarket, but we want to offer our customers more options,” says Harveen Jandu, a director in the business and wife to founder S.S. Jandu.

The new additions are aimed at further appealing to health-conscious consumers. While the retailer has a large expat customer base, some 70% of shoppers are locals.

Harveen notes Zucchini shoppers are well-travelled. For this reason, it has also added international foods like hummus and tzatziki.

“I want to introduce more Greek cuisine and Mediterranean flavours because we don’t want to do fast food. We are already doing pizza but I want to expand the flavour range and change the way we are doing it. Slowly we are adding more Italian jams.

“We are doing a lot of research in London, looking at products doing well there that we can bring here,” says Harveen Jandu.

“Our customers are willing to try new things. Recently we started doing fizzy fresh juices and it is doing so well. Every time we introduce something new on the shelves they notice. And sometimes our customers give us ideas.”