Kuwait-based mobile telecommunications company Zain today announced the signing of definitive agreements for the sale of 100% of Zain Africa BV, its African business excluding its operations in Morocco and Sudan, to India’s Bharti Airtel for US$10.7 billion. 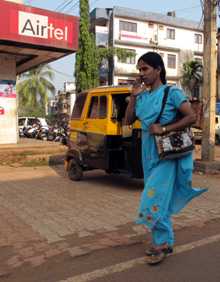 A women walking past a Bharti Airtel advertisment in Goa, India. Bharti will face some stiff competition from MTN in its newly acquired African markets.

Commenting on the transaction, Asaad Al Banwan, chairman of the Zain Group, said: “Since we acquired Celtel in 2005, we have grown substantially to become one of Africa’s leading mobile operators, and we are proud of the contribution Zain Africa has made to the development of communications across the continent. This transaction crystallises the significant value we have created for our shareholders over the last 5 years.”

Al Banwan added: “Bharti Airtel has a fantastic track record in running successful operations in the emerging markets and we are delighted that the African telecom operations that we so assiduously built are becoming part of such a committed and reputable telecom powerhouse. We wish Bharti Airtel all the very best for their future success in Africa.”

Nabeel Bin Salamah, chief executive officer of the Zain Group, said: “The transaction allows Zain to focus on its highly cash generative operations in the Middle East and to substantially improve its balance sheet. We are excited about the growth prospects of the Middle East and we believe Zain is well positioned to capture this opportunity.”

With this acquisition Bharti’s total customer base will increase to around 179 million in 18 countries. Bharti launched mobile services in India in 1995, Sri Lanka in 2009 and acquired Warid in Bangladesh in January 2010.

Bharti spent a significant amount of money and almost two years trying to partner with the MTN Group on its African business. In the end the deal fell through and Bharti will now directly compete against MTN, Africa’s largest operator.

Mr Sunil Bharti Mittal, chairman and managing director of Bharti Airtel commented: “This agreement is a landmark for global telecom industry and game changer for Bharti Airtel. More importantly, this transaction is a pioneering step towards South-South cooperation and strengthening of ties between India and Africa. With this acquisition, Bharti Airtel will be transformed into a truly global telecom company with operations across 18 countries fulfilling our vision of building a world-class multinational.”

Mittal also noted: “We are excited at the growth opportunities in Africa, the continent of hope and opportunity. We believe that the strength of our brand and the historical Indian connect with Africa coupled with our unique business model will allow us to unlock the potential of these emerging markets. We are committed to partnering with the governments in these countries in taking affordable telecom services to the remotest geographies and bridging the digital divide. I would also like to compliment the Zain group for building world-class operations in Africa and we have enjoyed working with them on this transaction.

“The extremely tight time lines and the enormity of the task posed a real challenge. Bharti was able to achieve this important milestone through much hard work and support from SingTel and the external advisors. Appreciation is in order for all the team members involved in this transaction,” Mittal added.