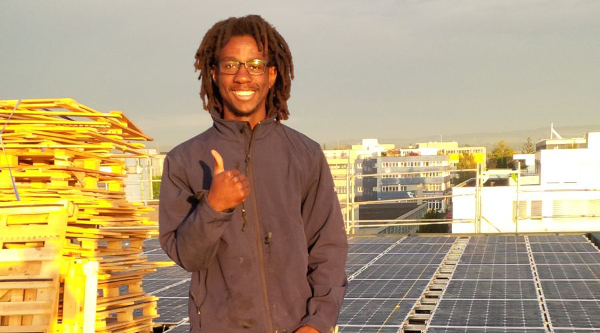 “Electricity supply is really important for the development of a country. Without electricity, New York or Johannesburg would just be villages,” said George Mtemahanji, co-founder of SunSweet Solar in Tanzania.

In 2003, nine-year-old George Mtemahanji left his home in Ifakara, a small rural town in Tanzania’s Kilombero District, to move to Italy where his mother had managed to secure work. It was eight years before he was able to return to his birth town, and he was surprised to see it faced the same problems it had when he left.

Key to this was the district’s energy challenges. A lack of reliable electricity had in many ways pushed the brakes on development and prevented local industries from reaching their full potential. For Mtemahanji, Ifakara had not changed in eight years.

“Some days you had electricity and the next day not. One day of energy, the day after – none. And blackouts, so many blackouts,” he recalled.

“Electricity supply is really important for the development of a country. Without electricity, New York or Johannesburg would just be villages – they’d be like Ifakara.”

At the time he was doing a technician course in renewable energy and instantly saw the potential for solar energy solutions in the region. For starters, he knew they were cheaper to maintain than the traditional power plants; were not impacted by fluctuating prices of petrol or diesel; and required less investment in infrastructure as they did not need kilometres of transmission lines to connect rural areas. In fact, he thought it was bizarre that solar solutions were not being deployed already.

“We have a lot of sun and it was really very strange that no one was doing something with solar energy. So when I saw how much of a problem it was, I thought: ‘Yeah, I can do something about this.’”

When Mtemahanji returned to Italy he paired up with a fellow student and they started researching the solar energy market in Tanzania, and the opportunities available.

He realised one of the reasons many communities and households did not adopt the technology was due to distrust of solar solutions, a result of poor quality products in the market.

“I remember talking about solar with some people who were working in a pension fund in Tanzania, and I was shocked to hear one person say that the solar lamp has less power than a normal electricity lamp. I tried to explain the problem is not with the solar energy, but with the lamp.”

By 2013 Mtemahanji and his friend decided to launch a solar energy solutions company in Tanzania, specifically targeting rural areas. They started looking for financial partners and suppliers and came across a Swiss organisation which wanted to build a photovoltaic plant (solar energy system) at a school in Ifakara. The duo offered to design and construct it for them for free, and was granted permission.

They completed the system in January 2015 – which took about a month. It is the largest photovoltaic plant in Kilombero and can power over 200 lights, dozens of computers and fans, a kiosk, a recreation room, and has the ability to store three days worth of energy.

“We designed it – the cables and all the technical things… We also had to design a ventilation system to keep the system from getting hot and losing some energy. We built a good system.”

“With 70% of Tanzanians having no access to electricity, we can give them electricity for 25 years for only $79… It costs less than $0.30 per month,” Mtemahanji said.

“Today a litre of kerosene costs $1.10. That means the people in rural areas spent 73% more with kerosene per month than with our solar system.” 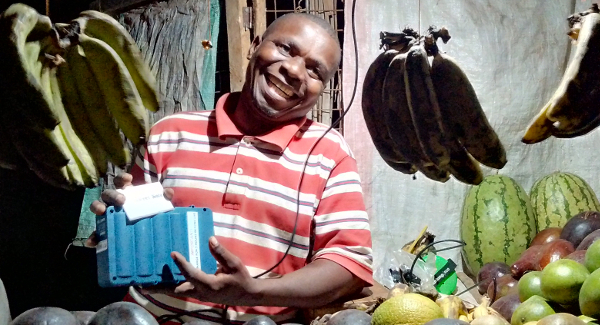 One of SunSweet Solar’s customers with a solar kit. He owns a fruit shop in Kibaoni, 5km north-west of Ifakara.

The price of the solar kits range from $79 to $105, depending on the electrical supply needs of communities and households, but Mtemahanji added he is talking to a Swedish organisation that can provide them with loans. This will allow rural households to pay for the system in instalments.

Mtemahanji, now 22, has recently been chosen as a finalist for the Anzisha Prize, Africa’s premier award for young entrepreneurs, where his company stands to win a share of $75,000. The competition showcases how young people on the continent have the power to operate clever businesses that can bring positive change to their communities. And for Mtemahanji, this needs highlighting. One of the greatest business challenges he faces is convincing investors not to be deterred by his age.

“In Africa it is difficult because when I start talking with people about our company and solar solutions, they often look at us like we can’t be taken seriously just because we are young,” he explained.

“It is really stressful for young people to build businesses on the continent because there are many stereotypes about us.”

His advice to other young entrepreneurs facing similar challenges is not to let it prevent them from getting up every day and trying their best to achieve their dreams.

“If we do not believe in ourselves, no one can believe in us. So we must have self-confidence.”