Jonathan Liebmann, founder of Propertuity, the property development company that owns and is responsible for the creative architecture and designs of the regenerated mixed-use developments of Johannesburg’s Maboneng Precinct, has his eye on Accra, Ghana for his next venture. 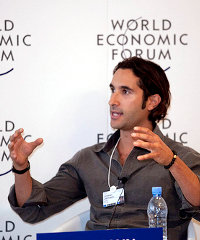 Although plans to expand Propertuity to Accra are still in its infancy, the company has already identified potential local partners and architects and is looking at various deals.

“We haven’t committed to any property yet, but the idea is to create a mixed-use development by recycling an old building in an old downtown area and then trying to bring life back there, and to the urban core there as well,” Liebmann told How we made it in Africa.

“I have spoken to a lot of companies just to try and get some advice and just really understand the market. And, of course, my model is going to be to have a local partner and also to start small so not to get ahead of ourselves.”

In 2008 Liebmann founded Propertuity in South Africa, the company behind the Maboneng Precinct in the urban core of Johannesburg. The area, once derelict, has breathed life into the city and has attracted residents back into the urban centre.

Prior to starting his company, Liebmann said he had always had an interest in the social dynamics and economics behind property, and at the age of 18 he bought, renovated and sold his first apartment.

He was inspired to found Propertuity after he returned to Johannesburg from travelling abroad and was looking to reconnect with the city.

“I felt that there was a huge need to re-engage with the city and to provide alternative living and working spaces,” he explained. “I was very bored and uninspired by Johannesburg’s suburbs. And so I started to think about how I could change the landscape.”

When it comes to regenerating old buildings, Liebmann said he is a design focused developer and spends roughly a third of each working day on design and collaborating with architects. He believes a lot of his success with Maboneng comes from understanding the context of the area he is developing.

“In Maboneng we are still going to be developing another 20 buildings over the next three years. So we have a huge pipeline in Maboneng,” Liebmann continued. “The population is going to triple over the next two years. So there is massive, massive growth coming to Maboneng but at the same time I am also starting to look down the line at other opportunities in other African cities.”

Liebmann said that, alongside Accra, the firm is also looking at expanding into Durban on South Africa’s east coast, and will be considering areas that are similar to the Maboneng Precinct in terms of accessibility.

“I think the most important thing is finding an area which is well located in terms of its proximity to other areas that are in the city. So Maboneng makes sense because it is in the central core of Johannesburg, so it’s actually very accessible. It’s also right by the highway so it’s got a very easy entrance and exit into it.”

He added that while Propertuity is in no way restricted to expanding only on the continent, Africa does offer considerable promise for the property development market.

“I think Africa has a huge amount of potential. It has six of the 10 most high growth countries in the world,” he highlighted. “I want to be a part of that growth.”

The future for Africa’s property sector, continued Liebmann, will be a combination of recycling old buildings and developing new ones. However, he explained that his business lies specifically in rejuvenating old buildings, and specifically looks for rundown industrial buildings.

“And with Africa’s colonial history, there are a lot of beautiful old colonial buildings that need rehabilitation so we see it as our responsibility to facilitate that.”

Advice from a young, serial entrepreneur

Liebmann started his first business at the age of 15 throwing parties inside clubs. At 18 he first tried his hand at property development, and a year later started a mobile coffee shop business. He then started a cleaning service, and at 21 created a chain of laundromats and drycleaners which he managed to grow to 17 stores before selling the company and starting Propertuity.

Having entered into property development at the young age of 24, Liebmann said he did face ageism as an entrepreneur. However, to counter this, he followed the notion that actions speak louder than words.

“People will take you seriously if you are properly performing and you are creating lots of change. There is no one who is going to disregard that.”

His advice to other young entrepreneurs looking to follow in his footsteps is to completely know and be confident in their product, both from a technical and financial point of view.

“And I think that the confidence can be the foundation of your success,” he concluded.