The Anzisha Prize, an award celebrating African entrepreneurs between the ages of 15 and 22 who are using business to solve problems in their communities, is expected to announce the top 12 finalists for 2014 over the next few days. 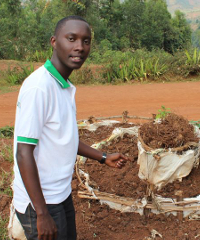 According to Chi Achebe, programme manager for The Anzisha Prize, the competition this year received 339 applications from 32 countries across the continent.

While the finalists are yet to be announced, How we made it in Africa looks at two young Rwandan applicants who are using social entrepreneurship in the agricultural sector to improve the livelihood of people in their country.

IMPORTANT NOTE: Finalists for The Anzisha Prize have not been announced. The entrepreneurs profiled below have been selected randomly and are not necessarily winners.

Marie Solange Tumusange is a 20-year-old student in the Pharmacy Department at the University of Rwanda. In the beginning of 2011, she and a friend started the Rice Growing Project (RGP) in southern Rwanda.

Tumusange rents land and lets out small parcels to about a 100 women she has identified as being the most in need, and who have families to support. These women are organised into four cooperatives and use the land to farm rice. Tumusange provides these women with all the inputs and farming materials they need to grow quality rice, such as seeds, fertilisers and hoes.

“I collect the harvested rice to ensure its quality and sell for a high price due to its quality.”

Tumusange and her co-founder take around 35% (averaging about US$450 per month) of the rice sales. The remaining 65% goes to the cooperative members.

Tumusange reinvests her earnings back into the project, and also manages to pay the school fees for her university education and two other students in secondary school.

“Tackling social problems that matter to a society is not a task of the government only, it is also a task for everyone of us, especially youth.”

So says Patrick Mugiraneza. In 2012, at the age of 20, Mugiraneza set up Gardens 4 Health in the Huye District in the Southern Province of Rwanda, a subsidiary of an international programme that provides agricultural support and education to families suffering from malnutrition.

To address malnutrition Mugiraneza and a team of 12 provide a home garden package and training to families so they can grow nutritious food in their gardens. Gardens 4 Health is located and specifically focuses on rural families with children facing malnutrition.

“Our home garden package is the core deliverable that we provide to each family enrolled in our project. It includes small livestock (chickens or rabbits), three seasons of seeds and seedlings, and the accompanying education.”

Mugiraneza recognises that providing seeds and livestock is not enough to tackle malnutrition and has plans to start offering health and nutrition education to every family that’s part of the project.

According to Mugiraneza, since launching Gardens 4 Health, his team has worked with hundreds of families, reaching about 1,000 children.

“This project has been met with exciting early success; 71% of members of families that enrolled in the project one year ago are now at a healthy weight.”