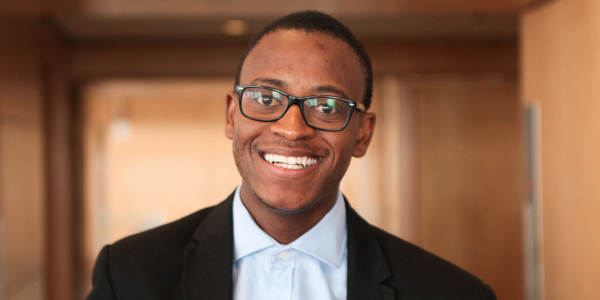 Excerpted from the book Win! by Jeremy Maggs, which features compelling conversations with 20 successful South Africans.

This is the success story of a young man who, upon getting married, sat down with his wife and made a list of fifty things they needed to achieve. That precise, forensic and focused approach came from his father.

Let me formally introduce you to Ludwick Marishane, the founder of Headboy Industries and South Africa’s youngest patent-filer after having invented DryBath at the age of seventeen. The product is the world’s first bath substitute that uses a skin gel.

The sales statistics are nothing short of phenomenal. Close on 90% of the product is sold online to the export market and more than half goes to the USA.

In 2011, he was rated as the best student entrepreneur in the world and in the same year Google named him one of the ‘12 Brightest Young Minds in the World’. And there’s more. In December 2013 TIME magazine named him one of the thirty people under thirty who are changing the world. He was one of only two Africans on the list.

At the heart of his being is the pursuit of a sustainable society. A sustainable society, he says, is a successful one and that segues elegantly into our discussion. Like most young people in their formative years, success originally was defined by money. But the more successful he’s become, the more his definition has matured.

“Success is actually being able to do what you want to, and what you find joy in doing, without the burden of providing food for your family.”

Pretty impressive for a man under the age of thirty. I like the notion of linking success and joy. He defines his joy as rising to a challenge.

“When I started working on DryBath, the big problem I was dealing with was a solution to global hygiene where in some countries families were forking out a fortune on bottled water just to bath. So for me it was about developing a winning formula. I said to myself, I can build a hygiene company and create a new category on the retail shelf.”

Throughout the quest for the solution, and it’s been well documented, it was the joy of the challenge that kept him going. It’s a useful piece of advice for people who encounter adversity on the path to success: focus on the positive of why you are doing something in the first place and don’t lose sight of the big goal.

So many guests in these pages have spoken about a calling to their profession and Ludwick is no exception. While it’s a job of work on the one hand, he says successful work has got to be work worth doing.

“Even when I was poor and I didn’t get money from the idea – and everybody laughed at me, I still found a purpose in it.”

Many successful people can recall with absolute clarity the pivot point when they knew they had finally achieved success or were close to it. In Ludwick’s case it was the day he graduated with a business science degree and the DryBath idea was already gushing through his veins.

“I remember trying to recruit a couple of my friends – really bright guys. I didn’t have any money and there was no guarantee of a salary and I was competing with corporates and consultancies. Of course, it was an impossible task but the fact that I was in a position to make a job offer was a key moment.”

So I wonder what those guys say to him now. It reminds me of the story of the publisher in the UK who turned down JK Rowling’s original Harry Potter manuscript. But unlike that sad story, Ludwick’s had a happier ending. He says they are still great friends and one of them is running the South African competitor to Uber. He says success is based on getting into the right business and, more importantly, one that suits you.

Throughout our lengthy conversation, the thread of education runs strong and you need to hear about Ludwick’s father who, after leaving his mother, became active in his son’s life at the age of six.

“My dad’s background is human resources and I think he was always trying to create the perfect ‘employee’ from day one. On the first day of primary school a girl comes up to me and asks how much the hamburger is that I’m eating and because of my poor English I have no idea what she is saying. When I recounted it to my father, he was obviously not impressed because from there on he bought me extra books and forced to me read the Sunday Times Read and Write supplement. And every day at 7 pm I had to give a presentation or a report-back to him on my day’s activities. I kept doing that up until grade four, when I got straight As.

“The message I got was if you put real effort into something and actually want to be good at it, you can be.”

But there was more to this boot-camp approach than just learning English. “My dad also gave me a scientific approach to problem solving. I focused more on the evidence of what I was trying to do rather than people’s opinions. And that is what drove me to finish the DryBath project. When I started out all I had was reputable research and that was the one thing that kept me going along with the fortitude to follow through.”

And that, believes Ludwick, is what has informed his successful work ethic. Ludwick says that early approach of dedication and purpose has also forced him to be a constant questioner. “I’m constantly asking myself why I am doing what I’m doing and what the bigger purpose is.”

Ludwick won a bursary in a writing competition and asked his dad if he could get a PlayStation. His dad put his foot down and insisted that a computer and the internet were more important to long-term success.

“So I think my dad put that critical-thinking head on my shoulders from the simplest to the most complex requests. I was always required to jump through hoops to explain why something made sense or why a request should be granted.”

Ludwick has taken that early interrogative approach into this work life. “I’m always that guy who is constantly asking for the why, even from a simple ‘let’s go drinking on Friday night’, why this Friday, why not Saturday, why not Sunday? I’ve always been fundamentally for understanding why we do things.”

Which says to me that he must be the most annoying person to work for or with.

“Throughout high school, I got a lot of criticism for either being arrogant or self-centred but I grew up to justify it. The reality is you have to earn the ability to boast!”

Ludwick says people who achieve success quickly need to focus on the job at hand but also the money quotient. “The biggest mistake I made was not learning how to manage money, particularly at university. I was in my first year and getting an allowance from my scholarship of about R750 (US$63) a month. Then fast forward to two years later and I’ve got a million rand in a bank account and you’re supposed to be using it to run the business, but at the same time you also have to send money home to mom. Balancing or learning how to separate the two duties – especially from a financial point of view – was a big learning curve and I appreciate the fact that I learnt it before I formalised the business.”

Ludwick says young people on the fast-moving success express train need to learn quickly to ask for help. Don’t hesitate to ask a person or a group of people with different skillsets about why something is being done; whether there is a better way; what the risks involved are and what likely outcomes are. The trick, says Ludwick, is to learn how to listen to them and take advice. While many successful people are slaves to the to-do list, Ludwick added that the trick is to adhere to it.

“I’m great at putting the list together but I’m not the best at making myself a slave to it.”

And that’s where the big master list comes from. It contains fifty life-plan items compiled jointly with his wife and includes building a house for his mother and making sure he can give a younger sibling a crack at developing the same skillset that he has. He’s also trying to learn French and is undecided whether he wants to live in Johannesburg or Cape Town. And here am I trying to decide what flavour Nespresso pod-sleeve to buy next time I’m at a mall.

Talking of coffee breaks, Ludwick is firmly opposed to downtime being sitting down and doing nothing. “In order to be successful you need to shut down and do something different to your work. Why? Because that’s where the brilliant stuff happens. Whether it’s being part of a soccer team or knitting. There must be something you do with as much passion and focus as your job but that does not add to the business bottom-line.”

In Ludwick’s case, apart from the odd game of squash, he has a 400 gigabyte collection of movies and says he’s addicted to documentaries.

In an honest admission, he says that he battles with the impact emotions have on decision-making. “Emotions are important and human beings are not genetically or biologically designed to make decisions based on logic alone.” He says that what he likes about algorithms is that they provide a logical basis on which to make a decision but gut feeling and a sensory understanding are also important. He says he’s getting better at the latter.

Being successful, says Ludwick, is also about having the courage to speak out. “I fear public correctness, living in a world where people cannot be honest with themselves; about who they are and how they feel because we’re increasingly living in a world where everybody’s watching you. I think a lot of people make decisions based on other people’s input rather than what the original intention was. That, I think, is society’s biggest threat to our continuing progress.”

Ludwick is among a new breed of South Africans who see themselves as equal and rightful members of the global economy. Unlike many others he does not pigeonhole himself as an African battling adversity and trying to succeed, but rather as a young man competing with the best that the world has to offer.

Our challenge as a country is to make sure we keep the likes of Ludwick here and make sure his contributions are not only acknowledged but also rewarded. It’s people like him operating in the entrepreneurial and creative economy who will guarantee sustainable competitiveness.

Excerpted from the book Win! by Jeremy Maggs, which features compelling conversations with 20 successful South Africans.