He quit his job five years ago to start an e-payment business from a cyber café. Danson Muchemi, aged 30, today runs Kenyan-based electronic payments service provider JamboPay, and services over 1,500 merchants in Kenya, Tanzania and Senegal. 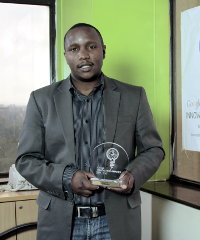 Muchemi says he started the business because at the time there was no local platform that allowed people to buy and sell electronically. JamboPay enables businesses and government agencies to accept and make electronic payments via multiple card and mobile money systems.

In two months JamboPay will begin collecting payments for business permits, parking fees and land rates on behalf of the Nairobi County Government following a deal signed last month. It is expected JamboPay will collect about Ksh. 600m (US$6.8m) every month in the first year.

Muchemi says such high profile jobs were hard to come by five years ago when the company started with limited resources and no track record in an environment where the “public had a lot of apprehension on anything e-payment”.

For the first six months Muchemi operated from a cyber café where he leased a computer for Ksh. 4,500 ($51) a month. He later convinced the cyber café owner to partition a small area where Muchemi ran his “office” with two leased computers.

“It was six months of maintaining the discipline of going to an office in a cyber café every day at 8:00am. I don’t think we would have survived through that first year without discipline. It did not matter whether or not we made any deals, I still dressed up and went to work,” says Muchemi.

During that first year, as he struggled to secure clients, partners and licensing, Muchemi says optimism helped him “keep the dream alive”.

“If I had known how difficult it would be I would not have walked that journey. However, there are some similarities between today and that first year when we were operating from a cyber café; I was as optimistic as I am today.”

Going against the grain

Muchemi says he “has a craving for challenges” and believes in handling the “hard bits first”.

“There is a general perception in Kenya that it is hard to do business in Tanzania. So we decided to make Tanzania our first investment outside Kenya. We knew there would be less competition and we would have a first mover advantage.”

JamboPay has recently also set up shop in Senegal and hopes to use Dakar as a launch pad for further expansion in West Africa.

“Senegal may not have a lot of economic activity compared to some African countries, but it is relatively stable and has a strong financial industry. Where there is a strong banking industry there is opportunity for us,” says Muchemi.

“These boundaries, these things of night and day and different languages do not instil fear in us. We love going against the grain. We knew we needed to be present in West Africa, so we took a plane and visited Senegal, identified partners to work with and set up there.”

Muchemi attributes the success of JamboPay to patience, proper planning and research, efficient internal systems, and focusing on the important things.

“Quite often you get distracted by people who say they want to buy shares in your company. It is good talk but that should not make you lose focus. We have experienced this at JamboPay and realised that things change quite fast over time. There was a time we were looking for Ksh. 20m ($227,000) but today we would need 20 times or more if someone wanted to invest in the business.”

Muchemi adds that partnering with people who share the same ideals and have the skills he lacks, as well as forming an advisory board in the company’s second year, have helped JamboPay steer clear of big mistakes.

“You often see partners fighting when a business becomes successful. I think the secret lies in the selection and how well you outline everyone’s engagement. A shareholders agreement is the one single most important document you must have with your business partner even if he is your identical twin brother. The roles and expectations of each party should be well defined.”