Women in Africa should “build up a tough skin” to succeed in the male-dominated technology industry. Ugandan technologist and social entrepreneur Evelyn Namara says female participation in technology in Africa is increasing, but gender stereotypes abound. 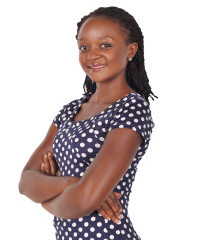 Namara is the East Africa regional manager for tech company Beyonic and a founding member of Girl Geek Kampala, a forum that seeks to erase stereotypes against women in technology.

“When I started my career in 2003 we had about 15% women representation in the industry. In my class we were about four or five ladies and so pursuing that career and then getting into the workplace where I was questioned on why I was going to a place to fix a server because I am girl, really encouraged me to find out why there were fewer women in the space and how that can change.”

Africa’s technology revolution has inspired many young entrepreneurs, but women remain under-represented. It is the same in the US’s Silicon Valley where women make up just 6% of CEOs of the top 100 tech companies and 22% of software engineers at tech companies, according to National Center for Women and Information Technology research. Another study shows women make up only 8% of venture-backed tech startups.

Namara describes a 2006 incident when she was employed at a software support company that helped SMEs set up their servers. She was sent out to check the servers of a local company but when she arrived, the head of IT was shocked the firm had sent “a small girl”. The manager got on the phone with Namara’s boss to express his discontent and fears that their data would be lost.

“I could see so many doubts in his mind. I felt sad. You don’t know me. How do you judge that I can’t do a job my organisation has hired me to do? My boss was my biggest cheerleader and he insisted that I should be given a chance. When I did the job the IT head was shocked and humbled. He asked for my number and often called to ask for solutions every time they had problems.”

This experience, Namara says, taught her to do her job “perfectly” because any mistakes would be attributed to her gender.

“The stereotypes are discouraging. If you have a low self-esteem you will never go to work. Girls need to know that it will be tough sometimes and people are going to judge you to your face. You just have to build up a tough skin.”

Growing up with three brothers, Namara says she did everything the boys did, whether it was climbing trees or playing with car toys. When one of her brothers went to university to study Engineering, she opted to do Computer Science.

Namara argues that one of the major stumbling blocks in Africa is the culture which creates a mindset among girls that there are things they cannot do.

“The way we are brought up affects decisions we make later in life, from small things like boys being encouraged to play with toys and cars while girls play with dolls. Girls grow up thinking they are supposed to do softer things and the boys are supposed to take on more complicated things.”

You don’t have to climb up masts

“The sidelining follows through to all the decisions they make. They are told to do other womanly things because ‘are you going to be climbing up masts if you are working for a telco?’ This is a very, very big fallacy because there are so many core sections that you can be in within the technology industry and appreciate it as a woman, be very competitive and accomplish a lot. There is a lot you can do with technology.”

Girl Geek Kampala is one of a number of forums sprouting up across Africa that encourage female participation in the blossoming technology industry. Namara says such forums which connect students, early stage entrepreneurs and industry leaders, play a critical role in helping women to “step up” in the industry.

“When you come together you share different opportunities and there is an element of being your sister’s keeper in that if someone is good at web design I could link them with a company hiring. Those connections are quite useful.”

“I think it is about mentorship for girls to understand that it is an open field and anyone can have equal participation. So far we have had so many women who were ideally afraid of technology come up in Uganda and across the continent and do great things.”

While she would like to see more women working in the industry, Namara argues that such positions should not be handed out as favours.

“We don’t want to be favoured. We want to be hired on merit and go out there and compete. Your skills as a woman should speak for you.”

Women, too, should not adopt a victim mentality despite the gender gap and discrimination.

“You have to rise above that. I always tell women to step up and stop feeling the victim [because] for so long women would come together to talk about the stereotypes and stigma. Where we are today we shouldn’t feel like victims, we should pursue the opportunities available.”