The notion of a free trade area spanning across Africa sounds wonderful in theory, but how will it play out in reality? 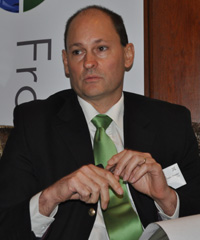 Peter Draper is the director of Tutwa Consulting.

The proposed Tripartite Free Trade Area (TFTA) consists of the 26 countries that are members of the Common Market for Eastern and Southern Africa (Comesa), East African Community (EAC) and Southern African Development Community (SADC). The plan behind this grand free trade area is to liberalise trade between the three trading blocs as soon as 2014/15 according to some reports. However, negotiations are still underway as state officials try to reach agreements.

According to Peter Draper – director of South African-based Tutwa Consulting, which researches and analyses policy and regulatory matters affecting business in emerging markets – the TFTA is a great initiative, but he does not think it will ever succeed in his life time.

“I think the core problem there is that policy perspectives are not aligned. So you have South Africa for instance arguing that before we can properly liberalise trade in the region, we have to have a regional industrial policy and what that is translating into, in my observation, is groups of officials getting together from various countries and starting to say how do we parcel out industries amongst ourselves. In other words a kind of ‘picking winners’ approach,” explained Draper at an Africa Frontiers Forum in Cape Town earlier this year. “I think that takes you down a road of conflict that is going to be extremely contentious and will distract us for decades – and that discussion, I’m afraid, is being driven by South Africa because we have our own interventions, industrial policy…”

Draper said that one of the main problems facing the TFTA is industry diversification and specialisation. In order for African countries within the TFTA to truly benefit from this free trade agreement, they will have to reduce competition around particular industries and commodities which they rely on for economic growth. This means that certain countries, with particularly strong industrial sectors, will nurture them through trade protection, something that Draper is deeply sceptical about.

“They are very different kinds of countries with very different interests and sometimes their interests will conflict and you’re setting yourself up for [tension] and my view is that if various governments are serious about… that interpretation of industrial policy, regional industrial policy, then I think they are setting themselves up for failure and for dragging on negotiations.”

Draper added that other challenges that face the TFTA’s implementation include inadequate infrastructure, unaligned policies and governance.

“I think if you are serious about regional trade integration in this Cape to Cairo trade initiative, you have got to take a much more basic approach and you have got to look at a trade facilitation perspective,” he stressed. “So let’s drop customs barriers, let’s put the infrastructure in place and let’s drop tariffs and if we can get to things like services, cross borders services supply, we will get to them in due course. But let’s start with the basics and not worry too much about who is going to do which industry [and that] discussion process because the minute you get into that discussion it creates a lot of conflict, which is what we are seeing at the moment,” concluded Draper.

Free trade in Africa is not a new concept, with COMESA – Africa’s biggest trading bloc – already being a free trade area. However the success of COMESA is debatable as the cost of trading remains high due to transport and infrastructural costs.