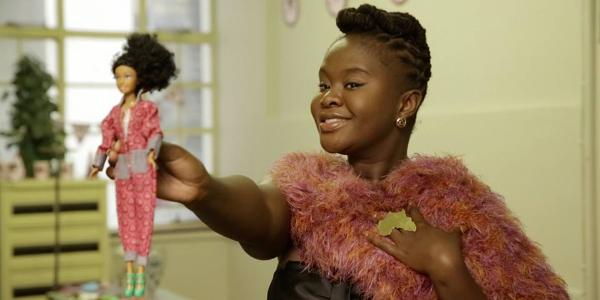 South African Maite Makgoba is the entrepreneur behind Momppy Mpoppy – a princess doll that young African girls can better relate to.

Soweto-born Maite Makgoba (28) is the founder of Childish Trading and Manufacturing, the company introducing the Momppy Mpoppy doll into the market.

The idea came to her while flexing her “super aunty” skills a few years ago. She was looking for a Barbie-type doll for her three-year-old niece who, like many girls her age, loved all things princess. After all, princesses are future rulers of kingdoms and wear glamorous dresses and shiny tiaras.

But when Makgoba searched the shops, she found these dolls were typically blonde and blue-eyed. And those that she could find with a more African skin tone, were generally dressed in stereotypical traditional clothing, and seemed to lack the glamour of their “white” counterparts.

“My niece had obviously fallen in love with this whole princess, glamour and funky thing, and I wanted her to see what is trendy and pretty in herself as well. That she can also be like that. That she doesn’t need to have blonde hair to achieve that, or light skin in order to be a princess – she can look like a princess as she is,” Makgoba told How we made it in Africa.

“So I wanted that type of mentality to be put through but there wasn’t anything like that in the market that could assist me to be the aunt [I wanted to be] to my niece. So I just decided to be the solution to the problem.”

And that was how the idea of Momppy Mpoppy was born – a modern African princess doll.

Working with a limited budget

In 2013, after much market research, Makgoba received the first version of a Momppy Mpoppy doll mould from a Chinese manufacturer. Relying only on her personal savings, she did not have the budget to develop a variety of dolls with different shades of African skin or body shapes.

“We thought we can’t just wait for funding – things needed to get started. We needed to show commitment from our side. So [the manufacturer] would send back designs or samples and we would approve, or not approve, ask them to extend the hair a bit, make the nose less sharp, make the lips a bit fuller, and trying to achieve as close as possible to African features as we could with the budget that we had.”

Once the mould was approved, she set up a small factory in Johannesburg where the doll’s clothes are designed and manufactured, and the Momppy Mpoppy is styled and packaged. It is currently being sold via online retailer Takealot.com, as well as Lilliputs Toys in Rosebank Mall. While the aim is to stock large retail chains such as Pick n Pay, Makgoba said the factory must first be able to scale-up production and distribution. 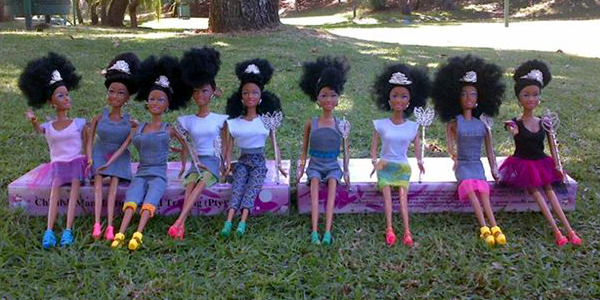 “And also we want to have a variety that will be able to compete with the international brands,” she added.

The company has already started on what Makgoba calls her “dream mould” for the next version of doll. “It’s actually in production so that is good news for us because this now means that we can have those different body varieties and types required so we can keep with the market.”

Momppy Mpoppy costs R179 (US$13.90), which Makgoba says is less than similar dolls in the market.

“Rather than try and make it an exclusive product, we wanted it to be accessible because in the first three years we need to make sure that our brand has actually [gained] a foothold in the market. So if more people are aware of the brand, the better chances of it growing.”

The company is also developing a child’s clothing and accessories line where young girls can have matching outfits with their Momppy Mpoppy dolls. Her idea is to create a household name similar to the Barbie or Mickey Mouse brand.

“We want the brand to go on to be part of a child’s lifestyle… So that was the thought behind it,” she continues.

“And Africans are in love with fashion anyway, so why not?”

Makgoba said it is challenging enough being an entrepreneur as it is, without being a young, black woman as well.

“We are like the first generation from our families and backgrounds who actually have such opportunities. Honestly speaking, we don’t have people back home we can refer to and talk business with to get advice. So doubts are always there because we are very new to this.”

She added that women entrepreneurs typically have to prove themselves to investors more than men. “People often don’t believe we are capable of handling such big deals, big money, and all these things. And they wonder how available you are in business. Are you a mother? What happens when you get kids? You always have to show commitment to what your own dream is, and just show them a stable head as well.”

Be revolutionary and dream big

Despite challenges, Makgoba noted there are opportunity for entrepreneurs in Africa to develop revolutionary businesses that can change the current status quo and solve problems.

“I mean, right now we are sitting in a position where the continent is ours. It is up to us to shape it, to direct where we want it to go. So wherever the direction, it has to be for the better of this continent.”

She attributes some of her company’s success to dreaming “crazy big” and advises other entrepreneurs to do the same. “At the beginning of this year I said to my team that we are going to end up in Forbes Magazine. And we did it.

“You have to think really big because that is how you challenge yourself. The bigger the dream, the more drive you put behind it.”