It is frequently noted that business models that work in the US or European countries, might not work in Africa and should be adapted to the continent’s specific needs. The same can be said for adapting business models from one African country to another, as the ‘copy-and-paste’ method does not address different market dynamics. And there is no better example of this than the case of M-Pesa. 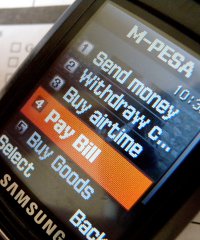 Herman Singh, who heads Vodacom’s m-commerce division, explains why he thinks the revamped M-Pesa will work in South Africa this time round.

Mobile payments and banking service M-Pesa was launched in Kenya in 2007 by Vodafone and has been a massive success with over 70% of the adult population using the service today. It’s uptake in the Tanzanian market has also been strong.

A major part of M-Pesa’s success has been in addressing the needs of the unbanked population who simply need a mobile phone to use the service. Mobile phone users can transfer cash amounts between each other, store money in a digital wallet, pay for goods at retail points of sale, and withdraw and deposit from street vendors and store agents.

But the model that has been so successful in Kenya and Tanzania, proved to be a failure in South Africa when launched in 2010, with the service later being suspended. However, M-Pesa has recently been relaunched, this time with a new model said to better address customer needs and behaviours in South Africa.

According to Herman Singh, Vodacom’s managing executive for m-commerce who was appointed to guide M-Pesa’s relaunch in the market, the platform has been completely revised.

“We recognise that Kenya’s and South Africa’s demographic profile is totally different so we had to do something fundamentally different… We have rebuilt the platform and the way the system works from scratch. The product features are all very different, and they had to be because the countries are different.”

While the platform has around 600,000 customers in South Africa right now, Singh said he predicts huge growth in the service. But what did Vodacom initially get wrong with M-Pesa in South Africa, and how does the revamped service differ from the Kenyan model?

“Distribution was one of the big problems. People didn’t know where to use M-Pesa,” began Singh.

When M-Pesa was initially launched in South Africa, it only had 800 agents. This year it launched with 8,000 agents, addressing both major retailers and informal outlets, and Vodacom hopes to increase this substantially in upcoming months. In comparison, Kenya is estimated to have over 60,000 agents.

The platform is also now connected with all the banks in South Africa. When it was initially launched in 2010 it relied on a single bank, Nedbank, which had little penetration in rural areas and among lower-income groups. For M-Pesa to be successful in South Africa, noted Singh, it must address the needs of South Africans across income groups. “In South Africa, 9m-10m people have internet banking, but the same number also receive social grants.”

He added it was also a lot more difficult to load money into the M-Pesa system for South Africans back in 2010. “Now we connect all the internet banks and you can load money through any internet bank in South Africa into M-Pesa. We have also launched the M-Pesa voucher which looks just like an airtime voucher, except instead of loading with airtime you load with money.”

It has also become easier for customers to register for M-Pesa in South Africa, which has a more sophisticated financial services and banking regulatory environment. Initially customers had to present their ID at one of the limited number of outlets to register. But today Vodacom has introduced a tiered system where customers who are limited to using R1,000 (US$90) a day and R25,000 ($2,248) a month can self-register easily on their phone.

If customers want to be able to transfer and spend more via M-Pesa, they can visit a Vodacom agent with a copy of their ID book to move to the next tier.

The relaunched M-Pesa also has a loyalty programme to encourage use of the service. For example, customers are rewarded with free airtime if they use M-Pesa to buy airtime, make a deposit into their M-Pesa account, or purchase an M-Pesa card.

While M-Pesa is currently available in 13 countries (and expected to launch in Ghana soon), the South African model is the most sophisticated, noted Singh. Last year the service was launched in Lesotho, Mozambique and DRC and already has a presence in a number of Middle Eastern countries and India, all based on the Kenyan model. However some features used in South Africa could be adopted in other countries in the future.