As Africa’s agriculture sector grows, more and more farmers and project managers are using irrigation to improve their yields. We talk to Senter 360’s Theuns Dreyer about the advantages of centre pivot irrigation. 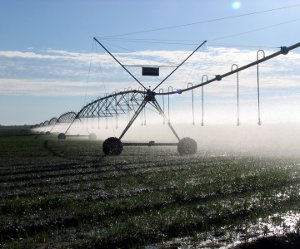 Centre pivot irrigation is the most cost effective method of irrigating large areas.

Which crops are most suitable for centre pivot irrigation? Who should consider using this type of irrigation?

Practically all crops are suitable given that the plant is not too high to be accommodated under the centre pivot. There are, however, centre pivot systems available for taller crops such as sugar cane and citrus.

Although centre pivot irrigation is best for irrigating larger areas, there are quite a lot of smaller systems in operation, covering areas of as little as 3 hectares, very often towable units. Given the precise application of water, low maintenance and labour costs, centre pivot irrigation can be financially viable even on such small areas.

Because centre pivot irrigation does not require any additional labour to operate and can easily be automated, it is well suited for small and large scale irrigation projects.

Centre pivot irrigation offers accurate water distribution at low pressure. It is also the cheapest way of irrigating on a large scale. The cost of each centre pivot tower is the same (only differing with the difference in pipe diameter) whether you have a small or a large system. With each additional tower you add, the radius of the circle is extended and the area under irrigation increases exponentially to the outside making it cheaper per hectare as it becomes larger.

How much maintenance does a centre pivot irrigation system require?

Maintenance on Senter 360’s system is very low and basically just requires routine checks such as making sure there aren’t any leaking oil seals on the drive units, that the pressure of the wheels is correct, air vents on the gearboxes are open and that tower drain valves are kept clean. Centre pivot gear box oil has to be drained and replaced preferably once a year. The rest of the system is electrical with very low maintenance. Senter 360 offers an excellent after sales service in the unlikely event of anything going wrong.

What sets Senter 360 apart from other manufacturers of centre pivot irrigation systems?

Senter 360 is a competitively priced South African designed and developed centre pivot of international standard. When you buy one of our systems you also have the choice to deal directly with the manufacturer.

One of the main factors that sets us apart from the competition is that we use pipe trussing, which makes the structure much stronger and lighter. Another advantage would be our I-Wob sprinklers that have a perfectly engineered droplet size resulting in more water in the soil.

In addition, we have introduced a number of small features that make a major difference. For example, we have patented technology to keep the last sprinkler constantly clean, thus maintaining the full irrigation application on the outer hectares of the centre pivot, normally prone to under-irrigation.

We also pride ourselves in not merely selling a product, but building long term relationships with our clients.

Senter 360’s systems are currently being used across the African continent. One of our recent achievements has been the allocation of an international tender for the supply of more than 55 centre pivots to the South African government for the Taung irrigation scheme.