Applications for the Anzisha Prize, Africa’s premier award for its youngest entrepreneurs, are now open for 2014 and will be accepted until April 15. The award is looking for African entrepreneurs between the ages of 15 and 22 who have started and are actively running innovative social ventures or for-profit businesses with potential. 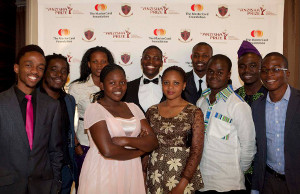 In addition to over US$75,000 in cash prizes up for grabs, 12 finalists will win an all-expenses paid trip to South Africa to be a part of a week-long entrepreneurship workshop and conference at the prestigious African Leadership Academy in Johannesburg.

The Anzisha Prize judging panel is looking for ventures that demonstrate ingenuity, scale and positive impact. Thirty-three fellows have been selected since the awards were first held in 2011.

But why should you apply for this year’s Anzisha Prize? Besides the opportunity to win large cash prizes that can help young entrepreneurs expand their businesses, all past finalists of the Anzisha Prize have also benefited from media exposure, mentorship, access to business networks, and/or funding.

How we made it in Africa spoke to some of last year’s fellows to find out how being one of the 12 Anzisha Prize finalists has benefited them, and why other young entrepreneurs should apply for the award this year.

“Definitely, being an Anzisha prize finalist has transformed my life. It offered to me lifelong opportunities and support which would help me to take my business to the next level. Currently, I have access to a wide network of successful entrepreneurs ready to help and provide me with assistance and guidance. I do believe that the boot camp at the African Leadership Academy helped me to master my project as well as understand the path to follow. In [summary], being an Anzisha Prize fellow is just an amazing experience.

“I do believe that the future is in Africa. It is the responsibility of the young African entrepreneurs to shape the future of their continent. Thus, being part of the Anzisha Prize family could actually be the key to success by opening doors and helping you to take your business from level one to level 10.”

“I have benefited by getting both initial seed funding and mentorship through the Anzisha network.”

“As a 2013 Anzisha Prize finalist, the three biggest benefits were the interaction and sharing of ideas with like-minded young people, the publicity gained from being an Anzisha fellow, and the learning and skills gained from the week at African Leadership Academy.

“You find people calling you up to attend seminars, to talk to them, kids from colleges asking to do interviews for their assignments. So all this was simply because of the Anzisha Prize. So it’s helped to spread the word.”

“The Anzisha Prize has benefited me in a ton of ways. First of all, I have gotten to know many amazing people and ideas too, which inspired me in business core aspects such as hard work, integrity and discipline. Through this award I have had a higher level of media coverage and recognition both nationally and internationally which has opened many other business opportunities for me in my home country and beyond.

“Being a finalist has made me revalue myself, knowing that I have a lot to contribute socially and economically in the lives of persons and communities.”

“Winning the Anzisha Prize helped broaden my organisation’s structure. It also helped advertise the organisation. For example, it became the focus of the Ugandan media and that made people know about it. It also created a lot of networking for me so that I am able to get different kinds of help from different people, from different departments.

“It gave me the courage that I am able to make it to my goal and also added value to my organisation. I am learning how to become professional in all I do concerning my organisation mostly because of some [mentoring].”

“Being the second runner up of the Anzisha Prize has placed me and my project on a global perspective, has provided me with skills to manage my business and capital to support the growth of the project.

“By applying for this award they will get to open up a road towards their success because a lot of opportunities will come along with the award.”

“Well, first of all the networking. That was, I would say, right up there. Just being able to meet and see people in [similar] situations – some are a bit further on, some a bit further back – but everyone is in the same space.”

“It has given me an open gate for Africa a lot, with many interviews and [connections] that are coming from the [Anzisha Prize]… I would like more young people to get more engaged with this, to make them more powerful with connections that can support their ideas.”