For more than a year TV journalist Caleb Karuga wanted to get fired. The Kenyan entrepreneur says that while he was good at his job, his true passion lay in farming, but he did not have the courage to quit his job. 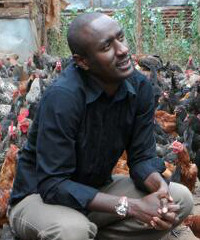 “I would pray with my wife every morning: ‘God, today I want to be fired.’”

If he quit his job Karuga would have had to forfeit KSh. 1.3m (US$14,800) in benefits, so he held on until last year when his employer retrenched him alongside dozens of his colleagues. Looking back, Karuga says this was a blessing in disguise.

The founder and managing director of Wendy Farms tells How we made it in Africa that as a child he hated farming. Like most kids in his rural village, he was used as free labour in the family’s agricultural ventures.

“I grew up being forced to go to the coffee plantation. I hated having to water the cabbages after school. I would see my uncles playing tricks on their father and faking illnesses so they wouldn’t work at the farm. As a young boy I viewed farming as a form of punishment. I don’t blame any young person who hates farming because I did too.”

It was while on assignment nearly four years ago that Karuga interviewed a professional mole catcher and felt motivated to go into agribusiness. Farmers would hire the mole catcher to trap moles, which destroy crops, at a fee. Karuga notes that by his calculation the mole catcher probably took home at least KSh. 90,000 ($1,000) per month, some thousands more than he was making as a TV reporter.

Every Saturday, groups of 30-40 people visit Wendy Farms for training on poultry farming. Karuga charges KSh. 1,000 ($11) per person for one session.

Karuga says he started offering training sessions to help other entrepreneurs avoid making the mistakes he made. He notes that while his success story is inspiring for other youth, few know about the challenges he encountered along the way.

When Karuga first ventured into farming he acquired 200 pigs because pigs were the ‘it’ thing at the time. With no proper research, the venture failed.

He made another attempt, buying two hens and one cock.

“When the two hens started laying eggs I decided to buy more hens from neighbouring farms. That was my biggest mistake because some of the hens were not vaccinated. In a span of about a month and a half I had lost about 200 hens. I learned that you should never buy birds that you are not sure whether or not they have been vaccinated.”

Not one to give up easily, Karuga purchased 500 day-old chicks from the Kenya Agricultural Research Institute, but once again made loses as his employees sold the chickens in his absence.

“Theft by employees was the major challenge we have faced. I bought the chicks at KSh. 100 ($1.14) each and after a month of feeding them my employees were selling them off for KSh. 50 ($0.57) each. When they matured I would be told the hens had ‘died’ of diseases.”

Karuga soldiered on and bought another 1,500 chicks, but because he used cheaper feed, egg production was poor. Eventually Karuga realised he would make three times more selling day-old chicks than what he was making selling eggs.

“I learned that in indigenous chicken farming the money is in day-old chicks, not eggs. It was like a light bulb moment for me. That is when I knew for sure I did not want to be employed anymore. I realised I had been sitting on a gold mine. I knew I needed to get fired and get it right with the business.”

Farming not for everyone

Despite his initial losses, Karuga says he has learnt a lot along the way.

“I believe in going through the learning curve. When a venture fails I don’t take it personally. It is the business that has failed, not me. I might have made a mistake but I choose to keep on the ball. I don’t make permanent decisions based on temporary situations.”

While it is encouraging to see more young people going into agribusiness, Karuga says the industry should not be romanticised.

“What we are seeing is people going into farming because they read a story in a newspaper. They don’t do thorough research and they have no passion for farming, but because it seems sexy they decide to take a loan and bury the money. Don’t make farming sexy because it is not.”

He warns that anyone looking to get into agribusiness needs to first have a passion for it.

“If your only motivation is to make money then you are getting into the wrong business.”