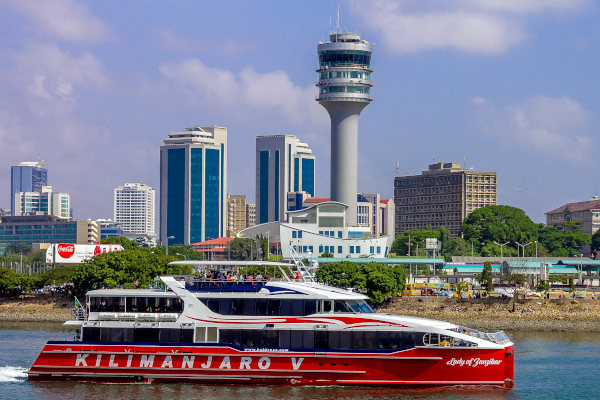 Dar es Salaam, the commercial hub of Tanzania which is ranked in 10th position.

Rand Merchant Bank’s (RMB) Where to Invest in Africa 2021 report assesses each African economy’s investment potential. The most recent report positions Egypt as the continent’s top investment destination with Morocco following and South Africa in third place. Based on their operating environments, other high-scoring countries have moved up the rankings, notably Rwanda and Botswana, now in fourth and fifth position respectively.

1. Egypt: While Egypt’s economy was hard hit by the pandemic, it was also one of the first to bounce back to a path of growth. This was thanks to the swift measures it introduced and the fact that it was on a stronger footing at the outbreak of COVID-19.

2. Morocco: The economy of Morocco benefits from political stability. A special fund to combat COVID-19 was established in 2020, representing 2.7% of GDP. Two-thirds of the funds were to be provided by private sources and one-third by the government.

3. South Africa: The southern-most country in Africa offers a strong manufacturing and retail base that supports southern African regional economies with goods and services.

4. Rwanda: Rwanda continues to benefit from the efforts it has made to improve its operating environment. Furthermore, as part of the National Strategy for Transformation (NST), various investments should support the construction and energy sectors over the next few years.

5. Botswana: The country has high foreign exchange reserves that have enabled it to weather the pandemic-induced economic storm better than most. The Pula Fund – a sovereign fund created in 1994 that finances a large part of the budget deficit – has meant fiscal dependency on debt has been low.

6. Ghana: Ghana entered the current crisis on a relatively stronger footing than its African peers. Structurally, its economy has seen major shifts over the past few years, positioning it for significant growth going forward. This is supported not only by primary-sector industries like oil and gold, but also accelerated development in the tertiary sector.

7. Mauritius: Aided by an extremely favourable tax regime, its financial sector will remain one of the main drivers of Mauritius’ economy into the future, notably through cross-border investment activities and banking services.

8. Côte d’Ivoire: A rise in private investment should continue to fuel construction, agri-industry and services (trade, transport and ICT, in particular). Private investment will benefit from the impetus provided by public investment under the 2016–20 National Development Plan.

10. Tanzania: Tanzania has been on a rapid path of development over the past few years. This progress can be attributed to consistent public investment from the government in key secondary and tertiary sectors, ranging from the energy sector to advancements in the telecommunications and finance sectors.

According to the author, RMB Africa economist Daniel Kavishe, a new world called for a new approach to the publication. Where previous reports positively projected Africa’s prospects – discerned through reliable and readily available data – COVID-19 has muddied the analytical waters and compelled the team to adapt their methodology.

The approach required an extra layer of sophistication. Says Kavishe: “We created a new set of rankings that incorporated some of the unavoidable COVID-19-induced challenges, of which the operating environment score was one.”

A fiscal score was also part of the methodology. This, explains Kavishe, was essential because fiscal scores are important indicators of how governments respond to COVID-19. Thirdly, the publication needed to explore key themes emanating from Africa’s developmental aspirations. “Of these, three are central to fighting the pandemic and resuscitating economic conditions,” contends Kavishe. “They are government intervention, a focus on our triple-threat sectors and healthcare.”

Historically, investment destinations in Africa have been ranked based on the tenets of economic activity and business operating environment. Aimed at investors targeting real assets in an economy or looking to expand businesses that rely on physical infrastructure, the rankings offer a strong basis for investing.

This year demanded more nuance. In addition to traditional indicators, corporates and investors needed to be made aware of the state of a country’s government finances and its ability to aid its economy in crisis. “The inclusion of a fiscal score in our rankings aimed to score governments’ fiscal positions and provided a basis from which investors can understand specific jurisdictions,” notes Kavishe.

“Although the pandemic brought much devastation, it also enabled opportunities for reimagining policies and trade relationships. Increasingly clear now is that homegrown strategies to tackle poverty, inequality and unemployment across Africa must be implemented. If not, all of Africa suffers,” Kavishe says, adding that capital will flow naturally to economies offering a good mix of opportunity and ease of doing business.