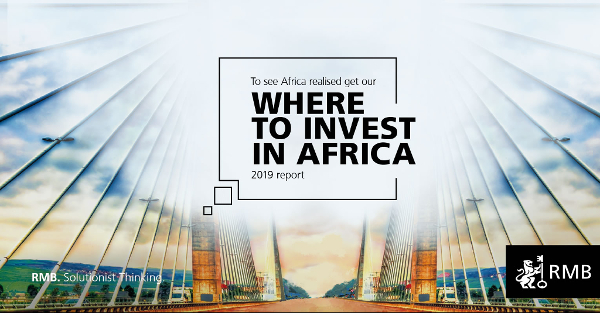 “Structural change is essentially the only hope for sustainable growth in Africa,” says Celeste Fauconnier, who, along with fellow RMB Africa Analyst, Neville Mandimika, have co-authored RMB’s new Where to Invest in Africa report.

The report begins by assessing each African economy’s investment potential. RMB’s Investment Attractiveness Index does this by overlaying macroeconomic fundamentals with the practicalities of doing business on the continent.

1. Egypt is Africa’s largest economy GDP-wise, boasting the biggest consumer market in the Middle East and North Africa, its diversified economy receiving large FDIs.
2. South Africa is also still an FDI hot spot, with the country’s currency and capital markets a cut above the rest of Africa’s, according to Fauconnier. But she warns that subdued economic growth and this year’s upcoming elections have created political-party divisions, which hamper policymaking.
3. Morocco is Africa’s fifth-largest market, which, with its medium-term growth-rate expectation at 4%, boasts an enhanced operating environment and investment appeal.
4. Ethiopia is set to be the fastest-growing economy in Africa, averaging 8.2% for the next six years – a slight normalisation from the 10% average experienced over the past decade. The robust momentum is supported by improved macroeconomic policies and higher government investment in local industries and human capital.
5. Kenya delivered a diverse economy and sustained expansion in consumer demand, urbanisation, EAC integration, structural reforms and infrastructure development, which include an oil pipeline, railways, ports and power generation.
6. Rwanda is another fast-growing economy, boasting the second-best business environment. Although a small market, the government is investing heavily into its domestic industries, with a significant increase of FDI recorded over the past decade.
7. Tanzania is expected to grow at 6.5% over the next five years. The economy is expected to overtake Kenya’s, supported by its resource-based manufacturing, tax incentives and development of special economic zones.
8. Nigeria jumped back into the top 10 due to improved macroeconomics, supported by recovering oil prices and production and favourable demographics attracting FDI.
9. Ghana has strong growth rates concentrated around the oil and gas sector, while the non-oil sector growth is supported by pro-business reforms.
10. Côte d’Ivoire also has strong growth rates, supported by large infrastructure investment, particularly in transport and energy.

Interesting Where to Invest in Africa facts

• In assessing Africa’s most attractive investment environments, RMB considered two important conditions for viable investment: economic activity and operating environment.
• Eleven countries are forecast to grow above 6%, Ethiopia set to be Africa’s fastest-growing economy. Certain sectors provide opportunities for long-term growth. Resources will continue to be key in attracting funds – particularly in the hydrocarbon, base and precious metals spheres. The all-important demographic dividend – especially the strong growth in population, urbanisation and GDP per capita – also provides growth opportunities.
• RMB also identified other growth opportunities. From a fiscal perspective, Africa has low levels of revenue collection. The IMF estimates that sub-Saharan Africa could potentially collect an extra 3%-5% of GDP in tax revenues by improving collection systems and broadening the tax net. Says Fauconnier: “Private-sector investment has also been lacking. This could change through more business-environment reforms, increased infrastructure and financial-market development and trade openness.”
• The report found no real improvements in operating environments across Africa. Although findings reveal a slight improvement to the overall operating environment, access to financing, corruption, weak governance and inadequate efficient infrastructure remain problematic factors for doing business in Africa. The top five performers in terms of operating environments were Mauritius, Rwanda, Botswana, South Africa and Seychelles. Mauritius is now in its 11th year of being the easiest business environment in Africa, and it keeps on improving.

Infrastructure in Africa: The growth essential

In this eighth edition, Fauconnier and Mandimika have focused on the need for efficient infrastructure – something they believe is key to unlocking opportunities and tapping into the growth that Africa has to offer.

The publication highlights some key findings – that Africa’s lack of efficient infrastructure shaves up to 2.6% off its average per-capita growth rate (The World Bank), placing significant strain on human development; that the annual infrastructure need is US$130bn-US$170bn annually (The African Development Bank); and that the continent’s available capital is insufficient to achieve this. In short, the lack of efficient infrastructure is one of the highest hurdles to business in Africa. But Where to Invest in Africa also shows that this obstacle represents an opportunity to businesses involved in the development or financing of infrastructure projects. Says Fauconnier, “Developing infrastructure is synonymous with developing Africa and unlocking her enormous growth potential.”

So, what are the challenges to infrastructure development? They are: weak legal, regulatory and institutional frameworks; weak infrastructure planning and project preparation; ineffective governance; and corruption, one of the consequences being limited private-sector involvement. The key to building well-targeted infrastructure connecting African economies to global value chains is “governments dedicated to the task,” adds Fauconnier. The Brookings Institution puts some numbers to that dedication, noting that to sustain 3%-3.5% economic-growth rates in Africa, infrastructure spending as a proportion of GDP should be 5%-6% annually. It’s currently at 2% (average). “Only a few countries globally have managed this allocation,” continues Fauconnier, “but execution of these funds hasn’t necessarily been effective.” Medium term, Africa’s fiscal imbalances will hinder increased spending. “We see governments over the next decade emphasising implementing structural changes – more so than ever. And how better than by developing infrastructure?” she asks. “It’s vital that both public and private players have mechanisms to ensure that their investments provide the best returns possible.”

RMB has incorporated a ranking that encompasses both the hard- and soft-infrastructure qualities for 53 African countries. The top ten best-performing African economies are a mix between the island economies, southern Africa and North Africa.

Where to Invest in Africa examines hard infrastructure in relation to its deficits, challenges and projects – current and future. “Over the last decade, we’ve seen infrastructure-development emphasis shifting from ICT to electricity generation and road-infrastructure improvements,” says Fauconnier. “This trend will continue over the medium term, as poor roads and unavailable or irregular electricity supply prove costly to operations.” When assessing the overall quality of hard infrastructure in Africa, Seychelles dominated the rankings, with its high-quality tourism infrastructure and strong ICT capabilities. North and southern Africa also featured highly –not surprising, since they’re home to some of Africa’s biggest, most diversified economies. According to the publication, common to the ten lowest-ranked countries is that they’re mostly fragile states, involved in conflict.

Hard infrastructure, core to growth, is essential for boosting economic growth levels. But it’s soft infrastructure that’s key when it comes to the quality of economic growth – or inclusive growth – and therefore essential to overall growth. “Sadly, infrastructure build hasn’t catered sufficiently for soft-infrastructure development, implying that the economic-growth benefits haven’t filtered through to most Africans, says Fauconnier, “Promises to improve soft infrastructure are used in election campaigning. But promises don’t always translate into implementation. The politicised nature of soft infrastructure and insufficient financing are major challenges in this space.” In Africa, the quality of services is difficult to measure. But taking specific human-development data (life expectancy, education, income) into consideration, one can, at least, see where they’re lacking. The North African, southern African and island economies dominate the higher rankings here, as they’re the most developed, with stronger institutions and policies in place than the rest of the continent.

“Closing the infrastructure gap in Africa is a mammoth task,” states Fauconnier, “But it must be taken on. And it must be addressed by both the public and private sectors.” In Africa, 90% of the projects underway are financed by public revenue through central governments or municipalities, the remainder, privately. According to the data, construction accounts for 83% of all ongoing projects being funded by the private sector, while the same sector draws just 12% of public investment. Governments, on the other hand, lean towards transport and energy-related projects, which together account for 84% of public investment and 13% of private investment. Nigeria, Ethiopia and Egypt (in that order) stand out as the three countries with the most publicly-funded infrastructure developments in Africa. Private funders show similar country preferences as their public counterparts, the notable exception being South Africa, the third-highest country by number of projects.