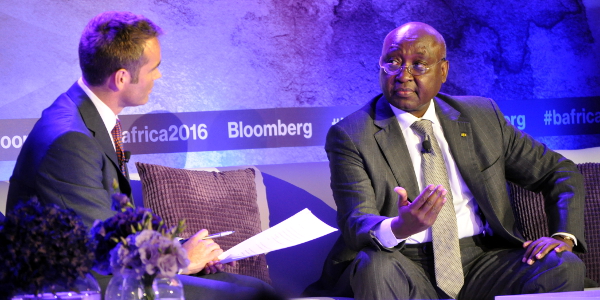 “It’s a market like any other. If you are looking for opportunities or for conflict, you will find it,” said Donald Kaberuka (right) during an interview with Bloomberg Television’s anchor and editor-at-large, Erik Schatzker (left), in Cape Town this week.

Just a couple of years ago Africa was praised as the last investment frontier by international media and businesses. But this narrative has quickly shifted to one of “doom and gloom”, according to the former president of the African Development Bank (AfDB), Donald Kaberuka.

Speaking at the opening dinner of the recent Bloomberg Africa Business and Economic Summit in Cape Town, Kaberuka highlighted a number of points that he believes outsiders need to understand about Africa today.

Much of the challenges that the continent faces today – such as weak local currencies and soaring debt repayments – are a result of global headwinds. These include a strong US dollar and low commodity prices that are placing pressure on current accounts.

However, Kaberuka noted these changes to the global economy are being felt across the world – from Latin America to Asia – with similar challenges seen in Brazil, Argentina, Saudi Arabia and Russia. He argued Africa shouldn’t be treated as an exception.

“We are no different; Africa is no longer an exotic market. It’s a market like any other. If you are looking for opportunities or for conflict, you will find it.”

Africa’s growth story is not just about commodities

Many oil and mineral-dependent exporting countries, like Angola and Zambia, are experiencing slower growth as a result of low commodity prices and declining demand from China. But there is much more to the African story than commodities, stated Kaberuka.

“The African story for me is different. If you look at the numbers in the last decade and half, the fastest growing economies, in a sustainable way, have been non-oil and non-mineral dependent economies. The mineral/oil-dependent economies have grown strongly, but their growth has been very volatile.”

Africa’s growth story is more around the emerging consumer population and technological developments which present opportunities for foreign investors and companies, he continued. Examples include Rwanda and Kenya, which are not resource-dependent, and can actually benefit from the low oil price as net-importers.

“Watch out for non-Africans – who do not understand this continent very well – that misinterpret temporary tactical problems as long-term strategic issues to deal with,” said Kaberuka.

He highlighted Rwanda as an example of this, where the genocide in 1994 resulted in many writing off the country. However, just 20 years later the economy was presented as a model for development.

“So why can’t Burundi do the same, and Central African Republic and Sierra Leone?”

Africa must find its own way

Kaberuka was also questioned about backslides from democracy, such as arguably seen in Rwanda where changes to the constitution could theoretically allow its current president, Paul Kagame, to serve until 2034.

But Kaberuka said African countries should decide what works best for them. “It is not for me or AfDB or someone from outside to tell people what they should do,” he stated.

“Each country has the right to decide what is good for them – from the US to South Africa.”