Two years ago the first revolving restaurant in Tanzania opened on the 21st floor of a commercial building in the country’s financial hub Dar es Salaam. Priya Kanabar, co-founder of the Akemi restaurant, quit her career in the UK as a psychologist to build the business with other family members. 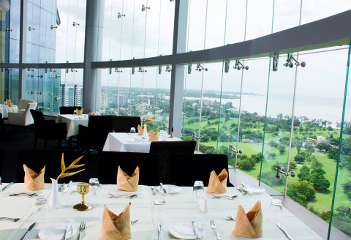 The view from Akemi restaurant

Although she grew up in the UK, Kanabar visited family in Tanzania frequently and saw the changes taking place in the country.

“I’d had enough of England and the cold weather. It was time for a change. So I decided to take the plunge and move back to Tanzania,” she recalls.

Her family has been in the restaurant business for decades and was planning to open a new outlet. Kanabar focused her efforts on building Akemi which has become akin to a tourist site.

“People feel excited when they come here and see the views. They can’t believe Tanzania has a revolving restaurant,” she says.

Target customers include corporate clients, workers from within the city, government officials, business people and tourists. Every day the restaurant offers a lunch buffet where diners pay Tsh.30,000 (US$16.3) to enjoy the food and beautiful views of the Indian Ocean, the harbour and the city.

It took a while to carve a niche

In the last two years, Kanabar says the restaurant has had its ups and downs.

“It started on a high because everybody wanted to come see it, then we got a lot of negative press,” she recalls.

“We were trying to do something in the beginning that really isolated us a little bit. We wanted to offer real fine dining cuisine such as French food with small portion sizes, however had to adapt to our guests and to our audience.

“Our menu now is a lot simpler, and we now have a mixture of cuisines including a couple of Swahili dishes. Then we started offering buffets which is a very popular thing here. I think we’ve found our niche now.”

Kanabar says running the restaurant is not as “glamorous” as some might think.

“I didn’t think there was anything more stressful than what I used to do, working with badly-behaved teenagers. But when it’s your business it’s a bit more emotional as well as physical. It’s not like a 9 to 5 job where you just go home when your shift is over,” she adds. “Being part-owner of a restaurant is not easy and it’s not glamorous. I am very lucky to have the support of my family,” admits the former psychologist.

Difficulties she has encountered include bureaucracy, finding staff and sourcing consistent supply of quality produce.

“In the western world you will have someone serving you in a restaurant but they have experienced that kind of dinner before. So they know what to expect in terms of the food they are serving, or how to present it or why the cutlery is placed in a certain way. But over here we are serving a very different type of cuisine and in a different way. So a lot of training is necessary.”

But despite the hurdles, Kanabar says opportunities are opening up in the restaurant business, driven by the emerging consumer class, the expat community, and an increasing number of well-educated and travelled Tanzanians.

To get it right in Tanzania, Kanabar advises entrepreneurs to have a clear plan in the beginning, understand the basics such as their target clientele, make arrangements with reliable vendors and hire the best talent. Entrepreneurs should also localise their products to serve Tanzanians.

“You should have lots of patience and be flexible enough to adapt to changes as the market dictates.”