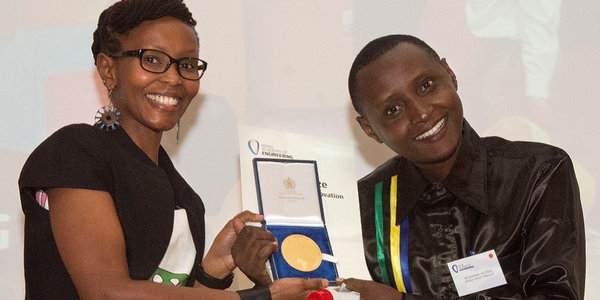 Tanzanian innovator and university lecturer Askwar Hilonga grew up in a poor rural home that had no access to safe drinking water, so he made it his life’s work to overcome both challenges.

His innovation, the Nanofilter – a sand-based water filter which uses nanotechnology to decontaminate water – is about to help him achieve just that. It has the potential to make clean water available to the millions of people in sub-Saharan Africa who still drink from unrefined sources, and to turn Hilonga from just another innovator into a successful entrepreneur.

Empowered by the £25,000 (US$38,390) which he won at the Africa Prize for Engineering Innovation in June, Hilonga is ramping up production of the Nanofilter and expanding his company. “It’s time to save more lives,” he says. “And grow my business.” First port of call is Tanzania, his homeland, where 70% of the population use no form of water purification and 88% of the infant mortality is caused by waterborne diseases. It is not these stats alone that motivate Hilonga though, but also his own experience.

“I was born in rural Tanzania and raised by a poor family in which most of the times we were suffering from waterborne diseases because we could not afford the luxury of expensive bottled water.”

However, where many saw only the challenges, Hilonga saw a business opportunity. After gaining a Ph.D. in Nanotechnology from a South Korean university, he put his knowledge to practical use by developing the low-cost Nanofilter. It purifies water by 99.999%, he says. The Royal Academy for Engineering, hosts of the African Prize for Engineering Innovation, described the Nanofilter as an innovation that could change the lives of many Africans, and people all over the world.

It is slowly gaining traction in Tanzania. Presently, ten local entrepreneurs operate “water stations” courtesy of his Nanofilter. “We rent the filter to them and they sell drinking water at an affordable price – five times cheaper than the bottled water,” he says. The local entrepreneurs pay his company Tsh.1,000 ($0.5) per day.

In addition to nine households who now use the Nanofilter, which goes for $130 per unit, Hilonga has also sold nine filters to schools, five of which were sponsored by a Canadian charity. “We have orders now from various places in Tanzania, Uganda, and Ethiopia,” he says. “At present the demand for our filter is higher than our ability to supply… Now we are able to increase our production capacity and we will also strengthen our team by employing more people for sales and marketing.”

Before the Africa Prize for Engineering Innovation and his present commercial growth, Hilonga doubted his Nanofilter would ever make it into the market because of his financial constraints.

“I was always looking for external sources of support at least for seed capital,” he explains.

He credits the Prize not just for giving him the capital to scale up his business, but also for training him on how to actually do business and granting his innovation – which he has since trademarked – increased visibility and credibility.

Now, with capital, manpower and expertise in place, Hilonga says he is ready to take on Africa. His plan is to first cover the 70% of nine million households in Tanzania that are not using any kind of water treatment system, and then spread across sub-Saharan Africa which shares the same challenge and thus holds similar opportunities for his company’s growth.

Onyedimmakachukwu is a journalist with a special interest in chronicling African progress and efforts to overcome her challenges. He lives in Lagos from where he contributes to several pan-African media platforms.