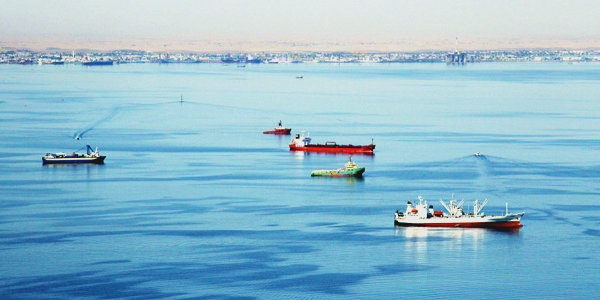 Namibia wants to position Walvis Bay as a trade hub for the Southern African Development Community (SADC) region. The city is already linked to a number of African countries – including Botswana, Angola, Zambia and the Democratic Republic of Congo – through four major transport routes: the Trans-Kalahari, Trans-Cunene, Trans-Oranje, and Trans-Caprivi corridors.

The Namibian Ports Authority (Namport) has started with a programme to boost the port’s capacity. A new container terminal, to be built on land reclaimed from the ocean, is expected to be completed next year. Another project is the construction of an oil tanker jetty and petroleum products storage facility. In addition, rail and road infrastructure are also being improved.

“Walvis Bay is establishing itself to handle freight to and from the SADC region. Geographically it is in a very good location, especially for trade with Europe. The government is definitely looking at Walvis Bay as a key catalyst for growth,’’ notes Phillips.

He says in the past year, DHL Express Namibia has seen a steady rise in shipment volumes to and from the Walvis Bay area, driven primarily by the fishing, oil and gas, and tourism industries.

The waters surrounding Walvis Bay has attracted many fishing companies, and the fisheries sector is currently one of Namibia’s major exporters. The port features numerous landing quays for fishing boats, and companies like Etosha Fishing and Hangana operate local seafood factories.

Walvis Bay is also an important player in the oil and gas industry. Due to its relatively close proximity to the offshore oil fields on the west coast of Africa, the port is responsible for repairing many of the industry’s support vessels. In addition, Walvis Bay is a base for offshore oil and gas exploration activities in southern Africa. However, the current low crude price does pose risks as oil and gas companies curtail their activities.

Tourism is another sector with promising potential, supported by the development of new tourist facilities and a growing number of international visitors due to the weakening of the local currency. The town of Swakopmund (40km from Walvis Bay) is already a well-known tourist destination. According to Phillips, the stretch between Walvis Bay and Swakopmund could be completely built-up in the next five years. In Walvis Bay itself, the authorities are also looking to attract tourists with the development of a new waterfront and marina.

Phillips explains increased commercial and tourism activity in Walvis Bay and the surrounding area is creating business opportunities for industries such as retail. Close to the airport, property companies Atterbury and Safland are currently developing the Dunes Mall, which will be anchored by supermarket group Shoprite. There is also the proposed Desert Rose real estate project between Walvis Bay and Swakopmund that, if approved, will feature a convention and exhibition centre, hotel, shopping mall, office space and a golf course.

“I think in the coming years Walvis Bay and the coastal region will go from strength to strength. It’s certainly exciting times,” adds Phillips.