Sub-Saharan Africa is undergoing the largest wave of urban growth in history. Since the beginning of the century, the urban population in the region grew by more than 200 million people. Today, 430 million people, or 38% of the population of sub-Saharan Africa, live in a city. This relentless urbanisation process brings huge social, economic and environmental transformations.

Urbanisation is often seen as a negative evolution of the human condition. The increasing number of people living in urban centres brings up the demand for housing, services (electricity, water and sewerage), education and for jobs. If this demand is not met, the result is poverty. Nowhere is the rise of inequality clearer than in urban areas, where wealthy communities coexist alongside, and separate from, slums and informal settlements.

However, urbanisation, if done correctly, can generate many good fruits. Commuting becomes cheaper and faster as cities concentrate people and businesses in a smaller area. A city has a greater variety of markets and goods than rural areas. More diverse job opportunities and easier access to education make cities a potential source for economic growth and self-development. Cities converge consumers and their spending and create new markets for goods and services. In the next 15 years, consumer spending in African cities is projected to reach US$2.2tn, a three-fold increase from current levels.

With the highest urbanisation rate after Asia, the future cities in Africa will require fast but comprehensible planning. By 2030, cities in sub-Saharan Africa will be home to 715 million people (Figure 1), or 47% of the population of the region. Basic housing and public services in urban areas such as healthcare, education, and public safety will struggle to match the growth rates of the urban population across the region. The growth of urban concentrations will be such that by 2030, sub-Saharan Africa will have 82 cities with more than one million people (Figure 2). From these, at least five will be mega-cities with more than 10 million people.

According to Tinashe Hatendi, business development manager for Africa at Surbana Jurong, urbanisation largely happens because of economic growth: “People move from place to place looking for new economic opportunities to better themselves, better their lives. At the heart of any urbanisation process, lies an economic driver.”

Surbana Jurong has a significant presence in Africa. Its footprint extends over 29 countries and includes 1,500 professionals in the continent. The company is involved in a range of different projects: from sewage treatment systems in Kenya, passing through capacity improvement of highways in South Africa to the rehabilitation of water dams for power generation in Malawi.

The city master plan of Kigali

Across sub-Saharan Africa, there is a growing concern from mayors and governors about creating a long-term plan for the development of urban and industrial areas. Singapore, one of the world’s most densely-populated countries, brings its expertise in urban planning to Africa with the help of companies such as Surbana Jurong, Hyflux and Meinhardt.

In the past two years, Surbana Jurong acquired two companies that helped accelerate the expansion of business in Africa: SMEC, a large engineering company with downstream capabilities, and Robert Bird Group (RBG), which specialises in the construction of iconic buildings.

Surbana Jurong is responsible for the city planning of Kigali, the capital of Rwanda (Figure 3). Launched in 2011 and with the aim of guiding the city development for the next 20 to 30 years, this comprehensive venture includes the optimisation of the transit system and development of affordable housing in the suburban areas of Kigali. The city will have three districts: Nyarugenge district will serve as a financial hub, Kicukiro, as a knowledge hub, and Gasabo will be the employment and cultural heart of the city.

Kigali’s master plan is one of the most recognised projects undertaken by Surbana Jurong in the African continent, winning the 2010 Best Overseas Planning Project Award and the Best Planning Project Award, in 2013, from the Singapore Institute of Planners Awards. This project helped disseminate the idea that a city can only reach optimum standards through the development of careful planning and thorough execution.

Following the creation of the master plan in Kigali, Surbana Jurong organised the construction schedule. The company established an office in Kigali from where the team of engineers and architects could closely follow the project execution. 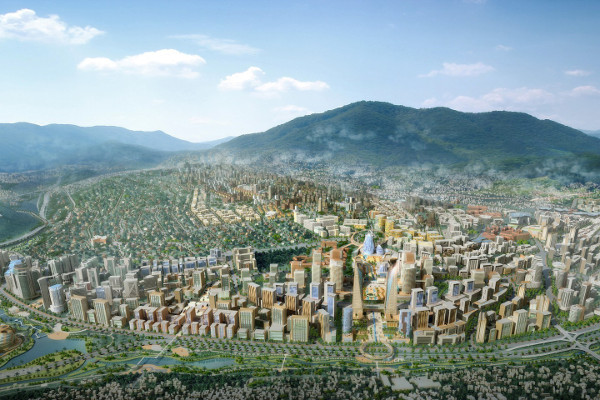 Surbana is also responsible for the master planning of Lekki New Township, which will accommodate the residential demands of Lagos’s expansion in Nigeria.

With a population of 21 million people, Lagos is not only the most populous city in Africa, but it is also one with the highest growth rates. The fast population growth adds further strain to the already insufficient public services and housing conditions in the city. Lagos’ population is projected to reach the 30 million mark by 2030.

In total, the Nigerian government created 12 development plans to address the infrastructural challenges of Lagos for the next 15 years. Located on the outskirts of the economic capital of Nigeria, the Lekki peninsula is an important economic arm of metropolitan Lagos (Figure 4). Besides Surbana Jurong’s township planning, the Nigerian government has created the Lekki Free Zone (LFZ) as a landmark for the industrial development of Lagos.

The development of the LFZ is 40% funded by the State, with the remaining 60% provided by Chinese counterpart China-Africa Lekki Investment Ltd. Until May of 2017, 116 investors had registered with the LFZ, from which 16 had commenced full operations. The project will have a deep sea port (in which the Singaporean group Tolaram played a major role), a new airport, an industrial park, a warehousing area, and it will also host an amusement park, hotels, a cultural centre, a golf course, hospitals and schools. It will be home to 3.4 million people and have a non-residential population, such as touristic, hotels, commercial, offices, hospitals and industrial, of about 1.9 million people. Eventually, the LFZ will be turned into an industrial satellite city of Lagos.

Another urban development linked to Lagos is the upgrade of the Ikorodu township, which proposes to turn this rapidly expanding settlement into an eco-friendly contemporary development. Ikorodu is a suburban town, with 40% of its inhabitants driving daily to work in nearby Lagos. Besides the construction of residential areas and the expansion and improvement of roads and public transportation, the project includes an e-library, a fire station, a seaport and hospitals.

In 2016, Surbana Jurong secured its largest master planning contract to date. The company will be responsible for the conceptual planning of the Northern Savannah Ecological Zone of Ghana and the detailed master-planning of the cities of Buipe and Tamale. The zone covers 54.4% or 130,262km2 of the land area of Ghana.

In Gabon, Surbana Jurong was appointed by Singapore Cooperation Enterprise (SCE) as the master planner for the Greater Libreville region, estimated to be 1,000km2 or around 1.5 times the size of Singapore.

Surbana Jurong is also in charge of another huge master planning contract. Covering an area of 9,600km2, the company is designing the future of Kinshasa, the capital of the Democratic Republic of the Congo (DRC). The project includes a regional plan, a master plan of Kinshasa and a detailed master plan of 24 municipalities in the surrounding areas. Kinshasa has a population of about 10 million people. This figure is expected to double by 2050.

Many other cities in sub-Saharan Africa started having their master plans inked in the recent years. In Tanzania, the Star City Township project in the Tungi Special Economic Zone is an example. Tungi is located within the urban limits of Morogoro City, 160km from Dar es Salaam. The project is a partnership between Singapore company Hyflux and a local developer. Hyflux has an extensive track record in the construction of water desalination plants and power generation plants (waste-to-energy and gas turbine) in various locations around the globe. For the Star City project, Hyflux will develop the infrastructure, utilities and environmental solutions.

The Star City project will feature an industrial park, a residential area for 140,000 people and a university town with educational facilities. The project also includes plans for the construction of hotels, a golf course and a theme park, all aimed at attracting tourists. The development will also have its own power plant and water treatment facilities. Phase one of the project is expected to be completed by 2025.

Another Singapore company that is gaining space in the urban infrastructure sector in Africa is engineering company Meinhardt. Meinhardt is a Singapore end-to-end engineering company responsible for the design and construction supervision of the Nairobi Pinnacle Tower in Kenya (Figure 5). When completed in December 2019, the 320m skyscraper will be the tallest building on the continent. Meinhardt is responsible for projects such as The Dubai Mall, the World Trade Centre 2 in Indonesia, the KL Central Station in Malaysia and the BHP Global headquarters in Melbourne. 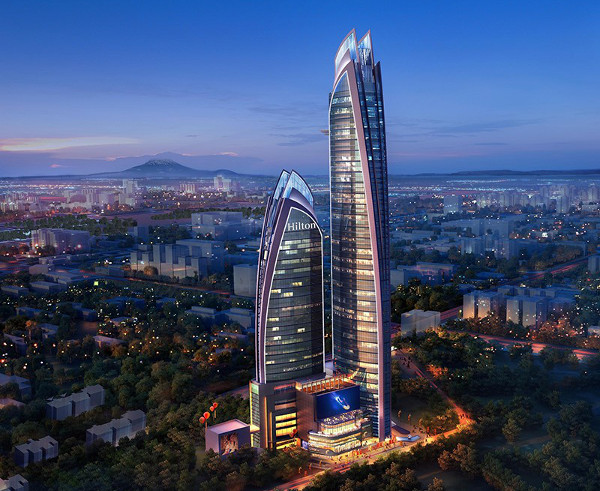 Meinhardt started growing in Africa very recently. Sanjay Sharma, regional director for Africa at Meinhardt, assisted the group to enter into the East African market in 2016, by advising and identifying the acquisition of an engineering company in Nairobi, Kenya. The company continues to expand in the region and recently opened an office in Kigali, to manage its projects in Rwanda.

Sharma states that East Africa suffers from a huge infrastructural gap in terms of roads and railways. “Kenya needs about 10,000km of new roads today,” which will assist in the challenges facing urbanisation in Africa. Meinhardt is currently looking at road construction supervision projects in Kenya.

For all the good prospects of investments in urban development, it is not a surprise that Meinhardt has selected Kenya and Rwanda as strategic countries for investment. Sharma considers that these countries have been promoting multiple infrastructure projects in the recent years and that foreign companies can operate with little interference from the government. However, he emphasises that the government could be more proactive when it comes to giving the go-ahead on large construction projects.

Urbanisation across Africa is usually focused on the largest cities, sometimes neglecting mid-size and small towns. A more balanced urbanisation process has the benefit of giving more options to businesses and industries of different sizes to establish themselves closer to their target market. Rwanda, for example, is making a conscious effort to develop secondary cities and avoid putting pressure on Kigali’s infrastructure. The goal is to promote the local economy through investment in infrastructure and providing technical assistance to district governments in enabling and partnering with the private sector.

Otavio Veras is an adjunct researcher of the NTU-SBF Centre for African Studies, a trilateral platform for government, business and academia to promote knowledge and expertise on Africa, established by Nanyang Technological University and the Singapore Business Federation. Otavio can be reached at [email protected]