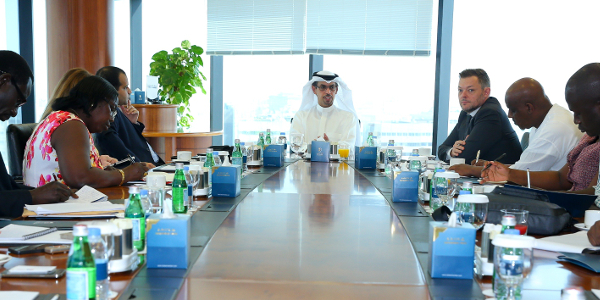 Hamad Buamim, president and CEO of the Dubai Chamber, during a media round table with African journalists last month.

“It goes back to around 2007,” the Dubai Chamber of Commerce and Industry’s president and CEO, Hamad Buamim, told a table of African journalists.

“I met the head of the Hong Kong Chamber of Commerce, and he said while Dubai is already a gateway for the Gulf region, Middle East and northern Africa, what they really want is access to Africa.”

At this time media coverage around Africa’s opportunities was only beginning to emerge as the Western world stood on the brink of recession. China, however, was already heavily invested in the continent. The establishment of the Forum on China-Africa Cooperation (FOCAC) Summit in 2000 marked a significant turning point in China’s relations with the continent, where the economic powerhouse started to take a long-term investment approach – the same year The Economist dubbed Africa “the hopeless continent”.

Debt was cancelled, preferential loans were granted, and trade with Africa grew exponentially as China looked for resources to fuel its economy.

This in no way went unnoticed, and there has been much debate about China’s influence on the continent, with Hillary Clinton warning of a “new colonialism” in 2011. But it can be argued – as many have – that China’s commercial involvement in Africa led to the rest of the world looking at it as a place of trade, rather than just aid.

The United Arab Emirates (UAE) was no exception.

The Middle Eastern country’s oil reserves are running dry and it has been developing a competitive advantage around Dubai’s geographic location as a commercial hub to access Europe, the Middle East and Asia. The emirate is known for its trade infrastructure and free zones which offer a number of economic incentives for companies such as 100% business ownership, tax free environments and no trade barriers.

But in recent years it has been increasing its focus towards Africa as global companies (such as China’s) look to the region. This month Dubai will host its third annual Africa Global Business Forum and the Dubai Chamber – which represents the interests of the emirate’s business community – has recently developed the Africa Gateway Smart Application, a free app to help its members access African investment opportunities.

It has also invested heavily in bringing African journalists to Dubai in recent years, to showcase the city’s opportunities for both African companies looking to go global, and global companies looking to access Africa. Last month 10 journalists from across the continent, myself including, were hosted for three days of interviews with prominent business leaders. The cost of such a trip must have been tremendous. But as one of the organisers told me – it is seen as an investment.

However, the UAE’s interest in the continent goes beyond simply positioning Dubai as hub to trade with Africa. A number of its home grown companies are active players on the continent – and have been for many years. DP Port manages ports in Senegal, Egypt, Mozambique, Djibouti and two in Algeria, with further investments underway to expand current capacity. Abu Dhabi-headquartered telecommunications service provider Etisalat has been steadily growing its market share, most notably in Nigeria and Egypt. Dubai’s state-backed carrier Emirates has become one of the largest airlines operating in Africa, now serving 28 destinations – which accounts for roughly 10% of the airline’s global passenger numbers and revenue.

This interest has led to the Dubai Chamber expanding its physical presence. It has already opened offices in Ethiopia and Ghana, and is launching another in Maputo, Mozambique. It is also considering setting offices up in Uganda, Kenya and Rwanda.

But perhaps what might have attracted the most interest from the UAE are the opportunities within the Islamic economy in Africa – and the Dubai Chamber recently commissioned the Economist Intelligence Unit to look into this. According to Buamim, the number of Muslims in Africa exceeds that of the entire Gulf region – and South Africa is one of five of the world’s largest producers of halal food. The report’s findings have revealed huge investment potential in Islamic finance, tourism and halal food.

There is no question about it, the UAE has spotted commercial opportunities. And yes, while this interest most likely comes with an agenda too – just like it has with China and the US – at least Africa has more choice. With multiple suitors vying for her attention, Africa can afford to be more selective with who she develops commercial relationships with.

And with African exports to China potentially halving in value this year – according to a recent Standard Bank study – the continent’s countries cannot afford to depend on just one trade partner for economic prosperity.