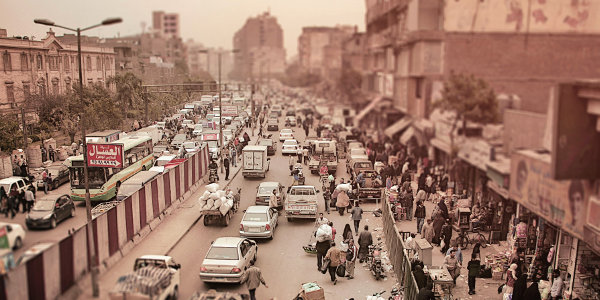 This article was written specifically for the NTU-SBF Centre for African Studies, a trilateral platform for government, business and academia to promote knowledge and expertise on Africa, established by Nanyang Technological University and the Singapore Business Federation. The original document can be downloaded here.

Egypt’s plans to reform its economy and draw investment have many facets. Key among them is construction and real estate, which were among the fastest growing sectors of the past two years.

The country is awash with plans for new cities and urban spaces to address a serious housing shortage, as well as increasing demand by the middle class for less crowded residential options and better lifestyles. The Ministry of Housing, Utilities and Urban Communities says Egypt needs to build 500,000 to 600,000 new homes a year to keep up with demand.

Government statistics show that Egypt’s population of about 97 million people lives on just 6 percent of the land. The capital, Cairo, is home to about 20 million of them and is one of the biggest and most congested cities in the world, with projections that the city’s population may double by 2050.

Egypt is Africa’s third biggest economy with a GDP of US$237 billion, after Nigeria at US$376 billion and South Africa at US$349 billion (IMF, 2017). The country went through several years of political turmoil from 2011 when mass protests led Egypt’s president of nearly 30 years, Hosni Mubarak, to step down. The Muslim Brotherhood, which won the election for a new government to replace the Mubarak regime, was once again overthrown by the Egyptian people’s massive revolt against them, with the support of the military, in 2013 after one year of their rule. The Egyptians then elected Abdel Fattah El-Sisi, who took over as head of state in 2014. The new leader began a process of economic reform to overhaul the struggling economy.

When it faltered, the government brought in the International Monetary Fund (IMF), signing a three-year US$12 billion loan agreement with the IMF in late 2016, which has set the country on a more radical reform path. El-Sisi won the 2018 election with a landslide, giving him a stronger mandate for tough reforms. The process has been rapid and far-reaching.

The main tenets have been the withdrawal of fuel and electricity subsidies, which became entrenched during Mubarak’s rule; the liberalisation of the Egyptian pound; changes in monetary policy, such as pushing up interest rates to contain rapidly rising inflation; strengthening social safety nets; and the introduction of 14 percent VAT.

In tandem with this, the government has introduced a raft of legislation to modernise the economy and make it more competitive. This includes passing a new investment law that clears away many bureaucratic impediments and offers investor incentives. Together with development finance institutions, the state is also prioritising the growth of small and medium enterprises, which comprise the bulk of the economy.

There have been some quick wins. In the 2017/18 fiscal year, Egypt reported its highest economic growth in a decade – 5.3 percent, up from 4.2 percent the previous year. It is aiming for 7 percent by 2022. Foreign direct investment (FDI) is increasing, showing a rise of 24 percent in the first half of 2018 compared with HY 2017. Inflation, which soared to 34 percent on the back of the subsidy withdrawals, was brought down to just over 13 percent by mid-2018. Unemployment has gone down and non-oil exports are rising.

But times have been hard for companies and ordinary Egyptians, battling high inflation and a 50 percent jump in prices on the back of the currency liberalisation process.

The president has acknowledged that the reforms are tough, but says they are necessary to address entrenched practices of the past that made Egypt inefficient, expensive and uncompetitive.

Even large companies have taken a hit, looking for ways to manage their margins and contain cost increases in fuel, power and imported inputs. Most CEOs have their eye on the future, rather than the present, waiting for the dividends of the reform process to bear fruit. In this regard, a number of international consumer companies are looking at large future investments to exploit higher growth, anticipated rising incomes and the positioning of Egypt as a hub between Africa, Asia and Europe.

The government has designated the building of several new cities as the basis of both an urbanisation strategy and a plan to decentralise development. The biggest project of these is the construction of a US$45 billion new capital outside Cairo.

The president’s critics say these developments are vanity projects that are soaking up funding while people are battling to afford food.

However, the government says the need for housing is critical at both ends of the spectrum. It is addressing huge pent-up demand at the lower end of the housing market, using the army to build low-cost housing and offering special interest rates of 5 to 7 percent for housing purchases, which is well below the prevailing market rates of about 20 percent. The government’s spend on housing rose 150 percent in 2016 over the previous year.

But most new investment comes from the private sector; in 2016/17, the construction and housing industry received the third highest share of investment. Private investment is focused on the middle- to high-end residential market, with construction undertaken mostly by local and Middle Eastern contractors.

The New Administrative Capital, which is yet to be named, is situated about halfway between Cairo and the Red Sea, where investment in the widening of the Suez Canal to allow two-way traffic has spawned many new projects in logistics, ship services and also real estate.

The new capital will deliver housing units over the next few years to house an estimated 6.5 million people, many of them currently crammed into Cairo. It will soon become the new seat of government, hosting 34 government ministries, parliament, presidential palaces and the embassies, which, in turn, will attract office blocks, shopping malls and other facilities.

The project, backed by huge political will, is moving quickly. Construction has begun and the government expects the official relocation of ministries to begin in 2019 – just four years after the project was announced.

It is to become Egypt’s first smart city, with technology innovations across many areas, such as traffic control and hazard detection. Residents are also able to buy units online and the first completed residential estate opened for bookings this year.

The capital is just one of several new city developments. Ground has already been broken for housing developments on New Alamein City on the Mediterranean, El Galala City along the Red Sea coast near Ain Sokhna, New Ismailia City on the Suez Canal and New Mansoura City in the Nile Delta. Once complete, these cities are expected to double the inhabited land area from 6 percent of the total to 14 percent by 2030.

Some of the demand for new housing is coming from Egyptians working overseas who sent more than US$20 billion in remittances back to Egypt in 2017 alone. They are looking for investments for the future, taking advantage of the currency devaluation, which has almost doubled their investment capacity.

The population continues to grow at an estimated 2 percent a year and over a decade, millions more people will require housing. It is also expected that the reform process will continue to create jobs and improve incomes, which will further increase demand. Egypt’s per capita income is US$2,412 (World Bank, 2017).

The government is using city planning as part of a decentralisation programme to redistribute economic activity and opportunity. These new urban spaces are linked to wider initiatives and investment in ICT hubs, new manufacturing zones and agricultural and energy projects, which are dotted around the country.

Urban development is underpinned by growth in other sectors, notably energy. Investment in this sector rose more than 300 percent in 2016/17 over the previous year and the country is seeking US$10 billion in FDI for the oil and gas sector for 2018/19.

The giant Zohr gas field, discovered in 2015 in the Mediterranean, is part of the plan to raise gas production to meet growing domestic demand, allowing Egypt to cut back, or even eradicate, oil and gas imports while exporting to the region and Europe. New refining capacity is also due to come on stream once the privately funded Egyptian Refining Company completes its US$4.2 billion greenfield refinery in 2019. This will allow Egypt to reduce its diesel imports by 50 percent.

Solar power projects are also attracting FDI after the government made the regulatory environment more attractive to investment. The Benben Solar Park near Aswan aims to be the largest solar park in the world when completed, producing up to 2GW of power by mid-2019. Egypt’s aim is for 20 percent of its power needs to come from renewables by 2025.

The new capital will contain massive solar power parks to supplement grid energy, and other cities will also have solar power generating capacity. Already 10 solar plants have been built in new urban developments.

As the population grows, there is also a big push into agriculture, to reduce an import bill of well over US$1 billion a year. Egypt’s per capita consumption of wheat is one of the highest in the world. The government has inaugurated projects to create new agricultural areas in desert regions with a view to expanding farmland by at least one-sixth in the next few years.

Development of energy capacity and food supply are part of the broader plan for integrated development that addresses the needs of a fast-growing population across the country. The shift of people to newly constructed urban areas is being accompanied by greater demand for goods and services, which the government has anticipated in its planning for the future.

As Egypt’s reform process begins to mature and the benefits become more evident, concerns about the appetite and ability of Egyptians to absorb the rapidly growing real estate stock on the market are likely to be addressed. As the president has pointed out, this is an investment in the future and one that has already been too long delayed.

Dianna Games is Executive Director of the South Africa-Nigeria Chamber of Commerce. Jaco Maritz is founder of Maritz Africa Intelligence.