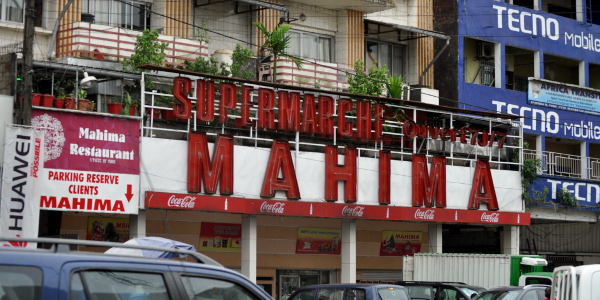 Mahima is a supermarket chain in Douala, Cameroon.

“Cameroon has never been a country that lacked opportunities. It has all the right prospects. But the challenge it faces is to create an enabling environment to encourage Cameroonians and foreign investors to invest.”

This is according to NJ Ayuk, CEO of pan-African legal and business advisory firm, Centurion Law Group. He noted that just a few days spent in Douala, the country’s commercial capital, would be enough to get any investor thinking about the many business opportunities they could pursue. Fast-food chains, modern retail centres and entertainment facilities – these are all vastly untapped.

“But few are investing and starting new projects. So you have to actually look to solve the reason behind this.”

Cameroon is ranked 166 out of 190 countries in the World Bank’s Ease of doing business index. The economy is one of Africa’s more difficult markets to operate in, ranking particularly poorly in areas such as registering property, paying taxes and trading across borders.

Ayuk has experienced these challenges first hand with launching his firm’s Douala office in 2015. The company has a presence in five African markets but it took a bit longer than expected to open shop in Cameroon due to what Ayuk calls “administrative bottlenecks”.

He explained that business laws are in French – despite the country being both French- and English-speaking – which can be a deterrent for many foreign investors. And while the government has tried to attract investment through various incentives such as tax breaks, he noted that the amount of taxes and other costs that small businesses encounter can be overwhelming. For this reason, Ayuk advises anyone starting up in Cameroon to budget in enough “patient capital” to survive the generally slow and costly process of getting a business off the ground.

However, those willing to rise to the challenge will find an abundance of opportunities in Cameroon. Here are a few highlights.

Cameroon has immense agricultural potential and is already a world-leading producer of cocoa. Other significant crops include coffee, bananas, palm oil, cotton, rubber and cassava. However, the vast majority of farmers are smallholders, and there are opportunities for large-scale commercial operators to increase agricultural yields through modern processes.

Cameroon’s geographic location – it is the link between west and central Africa – makes it a strategic trade hub with the potential to become a food exporter to the region. Development of the deep-sea port in Kribi is expected to assist the flow of goods to and from the country and take the pressure off the Douala port, which is infamous for its long delays.

According to Ayuk, there is opportunity for Cameroon to become a greater regional trader of food and agricultural produce.

There is potential to build a downstream oil and gas base and set up petrochemical plants for urea, ammonia, methanol, fertiliser and liquefied natural gas (LNG), as well as establishing electricity generation facilities.

“These are very bankable projects that ensure great returns and stand to create more jobs in the country,” Ayuk said.

“There is a huge need for power in order to meet government’s industrialisation goals. Furthermore, new projects coming up – like the floating LNG project by Golar and Perenco – present huge opportunities for service companies in the country.”

He added that there are also untapped areas for both onshore and offshore exploration and development in the Douala/Kribi-Campo Basin, as well as Logone-Birni, Mamfe and Garoua.

Cameroon has rich cultural heritage sites with terrain that ranges from tropical along the coast to semi-arid in the north. It is often described as ‘Africa in miniature’ due to an array of cultures, climates and terrains. Its wildlife also offers opportunities for safaris and big-game hunting.

However, Cameroon’s tourism potential is largely unexploited and Ayuk sees prospects for local entrepreneurs to develop businesses such as tour and transport services.

In addition, there is also a need to build quality boutique hotels to cater to foreign travellers and tourists. According to Ayuk, there is only one world-class boutique hotel in Douala.

“So there is actually a lot more that can be done to boost the tourism sector.”

“There has been no real effort to build low-cost housing [on a large scale] in Cameroon… for low income and [emerging] middle-class families and not just projects for high-net-worth individuals,” said Ayuk.

He added that while the demand for low-cost housing is vast, these type of projects require innovative entrepreneurs who can work with banks and construction services to develop unique solutions.

An estimated 98% of Cameroonians shop at traditional or informal markets, and can buy products at wholesale prices at large open-air markets in major cities – such as Douala’s Marché Mboppi. There are few formal retail chains, although French supermarket group, Carrefour, plans to expand in the market.

There is also an opportunity to introduce fast-food chains (such as KFC) and entertainment facilities (such as cinemas and theatres). Here, investors have potential to be a first mover in the market.

“The spending power is there,” said Ayuk. “Cameroonians just need to have the right quality products and services.”