In Kampala’s suburbs and slums, kung fu is becoming a popular way to get in shape, learn discipline and break into the country’s booming action film industry, known as Wakaliwood. 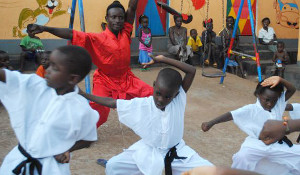 For kids learning the martial arts, becoming a famous action star has become the ultimate goal.

In a suburb outside Kampala, Kizza Ssejjemba is hard at work.

He is teaching a group of 10-year-olds how to punch. A longtime adherent of kung fu, Ssejjemba holds classes weekly, attends three kung fu workouts a week, and still finds time to star in and produce Uganda’s action film industry.

Ssejjemba has been doing this for years and he’s playing every role from prosecutors to villains.

One movie, called The Crazy World, covers child sacrifice, and many of his young kung fu students star in the film.

Ssejjemba explained how he got started in the business.

“When I was 17 years [old], I joined … the Country Wing Chinese School, and the master was Bruce Bai, known as Master Lu. So he trained us very well. And as for now, I can do everything. I can teach kung fu…  in fact, one day I first saw a Jet Li movie,” he said.

“Then I was interested and I said, ‘I know kung fu why don’t I go join the film industry?’ So I went to Ramon Film Production and I met these guys… and we joined together and just started acting. So far we have acted in eight action movies,” Ssejjemba said.

His colleague, Earnest Sserunnya, who has worked in Wakaliwood since it started, has become a local celebrity in Ugandan cinema.

A gregarious man, Sserunnya’s films took on a life of their own, using homemade props such as wooden guns and binoculars made of old water bottles.

His passion, Sserunnya said, was to improve lives through film, and he hoped one day to open an acting academy in Kampala.

“We need to get schools to teach actors… In the film you speak reality. If it’s crying, you cry… I want to put up a school whereby I teach acting, makeup, directing, editing and camera,” Sserunnya said. “It’s my dream, and my foundation, East Africa Film Street Kid Foundation, the movie I’m making, Precision, is with those little small boys. … Those are street kids.”

The buoyant mix of home grown kung fu stars and uniquely Ugandan cinema has made these films immensely popular. People often stop the actors on the street to thank them for their films.

Ssejjemba and Sserunnya said they hope, in the future, an official Ugandan Film Council and government investment in their industry will become part of the production. – VOA