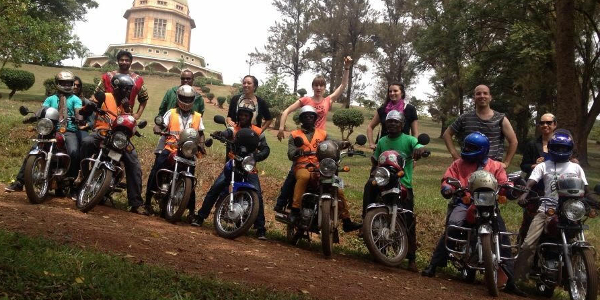 “The best tour of Kampala!”

These are some of the reviews tourists have left on TripAdvisor about Walter’s Tours – a guided excursion through Uganda’s capital Kampala via a motorcycle taxi (or boda-boda). The company was started about seven years ago by Ugandan Walter Wandera and today employs close to 30 motorcycle drivers who weave through Kampala’s dense traffic jams to show visitors some of the city’s main attractions and historical sites.

But few know of the odds that Wandera had to beat to get to this stage. Before he was an entrepreneur of this reputable business, he was first a school dropout, homeless, and even an illegal immigrant.

Born into a poor family in Mbale in eastern Uganda, Wandera was one of seven children and was often in and out of school – depending on whether his family could afford to pay his tuition fees. He had been working odd jobs from a young age to help pay his way and eventually completed his secondary schooling – but could not afford to go to university and had no idea what to do with his life. In 2006, at age 19, he found himself living on the streets not sure what to do next.

“I was homeless – which made it even harder to find work,” he told How we made it in Africa.

Looking for a fresh start, Wandera decided to jump onto the back of a large truck which was passing through the city and – without realising it – found that he had been carried illegally across the border into Juba, the capital of what is now South Sudan.

“I didn’t know what the destination would be. I just went,” he recalled. “I didn’t have any papers or anything, and the fact that I was on a truck that carries goods – well, I guess I was lucky to have just ended up there.”

Once again, Wandera was homeless and struggling to find work – but this time in a foreign city. He eventually met another Ugandan, who was selling cold water from cooler boxes in the street, and who helped to set him up with similar work.

“I found many Ugandans were living on the street there – just looking for a place to sleep every night and the following morning they’d wake up and try start again. I slept in mosques or churches.”

Wandera also had to learn the local languages, with an Arabic pidgin being commonly spoken in Juba. For around two years he worked different odd jobs, and eventually found permanent employment in a pharmacy.

“But being in a new country where I had no legal documents was hard. There seemed to be a [police] crack down all the time and you could get arrested after working for three months and then spend all the money you saved trying to get yourself out of jail… I didn’t look like I was South Sudanese so people could tell – and I was running away from the police all the time.”

Starting a business in Uganda

As a foreigner, Wandera was also often “bullied” by those around him, and so started to save up money to return back home. In early 2009, he managed to sneak back across the Sudan-Uganda border and travel to Kampala with around US$200 is his pocket.

“I took a bus from Juba and reached the border but, because I had no legal documents, I jumped out of the bus at the border on the Sudanese side and walked through the bush into Uganda. I then got a bus from the northern part of the country towards Kampala. It took me about three days.”

He used 30% of his savings for a down payment on a motorcycle, and started working as a boda-boda driver in the city to pay off the rest. With his earnings, Wandera managed to enrol for a computer engineering course at a local institution offering vocational training. During this time he would study during the day and work at night – and managed to get about two to four hours sleep each day in a tiny room in a slum belonging to his sister. He got his own place after six months, but soon after decided to drop out of his vocational training course because he realised it was not what he wanted to do with his life.

However, he did stumble upon a business idea during his months as a boda-boda driver. “I used to drive [foreign] people to work from hotels and various other places, and I could talk with them because – unlike most of the motorists here – my English is very good. So I had the chance to talk and interact with a lot of people and some kept asking me about whether there were any tours they could take in Kampala. I said no, but then I thought about it… Other cities [around the world] have city tours, and so maybe I could do that.”

Wandera started to educate himself about Kampala’s heritage sites and tourist attractions – making sure he could recite the history behind each site. By 2010, he had started marketing his boda-boda tours online.

“And then it just started to take off slowly.”

Today, Wandera’s business conducts tours for between three to 15 clients each day and has partnered with other tour guides to also offer boda-boda safaris. “Now we are expanding to Rwanda, Kenya, Tanzania and eastern Congo, which is where there is an active volcano.”

So what is his advice to other aspiring entrepreneurs? Be determined, work hard and learn from the experiences that life throws at them – no matter how challenging they are.

“I love that life has helped me learn a lot from my experiences,” he added. “That alone has made me stronger.”