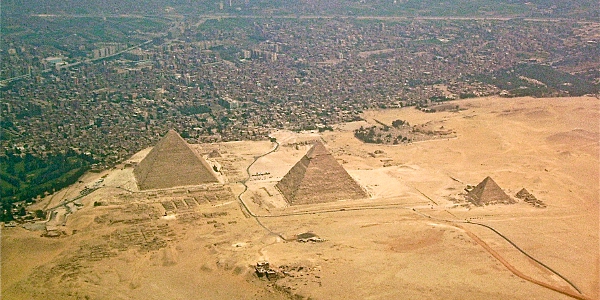 Below is a trip note published by Old Mutual Investment Group after its Equities team visited Egypt.

When I visit Egypt I come away questioning why I spend so much time researching and analysing companies in the many illiquid African stock exchanges, when Egypt seems to always offer such interesting investment opportunities – both to buy and sell shares. It is one of the few places in Africa where you can invest in the manufacturing sector outside of traditional food and beverages. The Egyptian Exchange (EGX) has over 200 listed companies.

For the second time, I travelled solo after the Egyptian embassy issued me with a visa, but declined my Moroccan-born colleague Sanaa Zarif a visa. Once again, no reasons were given. With the team’s only Arabic speaker sitting in Cape Town, company management meetings were more of a challenge. Fortunately, many of the people I met with spoke English.

Let me start by saying that visiting Cairo in December makes a lot of sense:

• You get to find out how the listed companies have performed going into the close of the year, and discuss the prospects for 2018.
• The winter weather is perfect. Temperatures varied from around 12°C in the morning to 25°C in afternoon.
• Traffic is tolerable, but maybe I have finally acclimatised to traffic volumes in a city of more than 20 million people. Apparently, I did get a little lucky as some roads coming in from the east of Cairo were closed because of mist.
• And, finally, if your timing is right, you can catch five days of festivities. Ancient Egyptians used 12 months of exactly 30 days each, with five days of festivities at the end to make up 365 days.

Ever since I have been investing in Egypt, it seems to have been going through difficult times. There was the Arab Spring in 2011 and then a military takeover (and don’t call it a coup) that displaced the first democratically elected president after Hosni Mubarak was unseated. This followed a period where we could not get money out of the country. Ultimately, it culminated in the currency being massively devalued in late 2016. Fast forward to today, and Egypt is now looking like the most attractive of all the larger African markets in which we invest.

The reasons for this are:

• We expect the currency to be stable.
• The EGX 30 index is looking reasonable at a price:earnings (PE) ratio of around 10 times.
• We estimate company earnings to grow at around 15% in 2018.
• The economy is back on track, with a GDP growth outlook of around 5% in 2018.
• Tourism, an important foreign revenue generator, is picking up again. For the first time in five years, I had to share my row of seats on the EgyptAir flight from Johannesburg to Cairo. 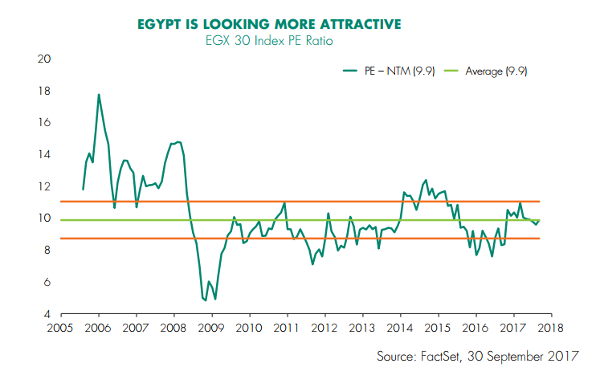 While in Cairo, I met with companies from a variety of industries:

• Our analysis shows the banks continue to make record profits as they benefit from the high interest rates. However, the government is looking to charge a levy of 5% on banks’ net profits.
• The cement industry is expected to remain under pressure in the short and medium term, as the Egyptian army is set to open a 12-million tonne plant (adding around 15% new capacity).
• Our research of the fertiliser businesses shows they are performing well. The weak currency means that export profits are strong.
• The food producers have been through a difficult time, as consumers are faced with high inflation. However, this is now in the base and we expect volumes to start recovering. 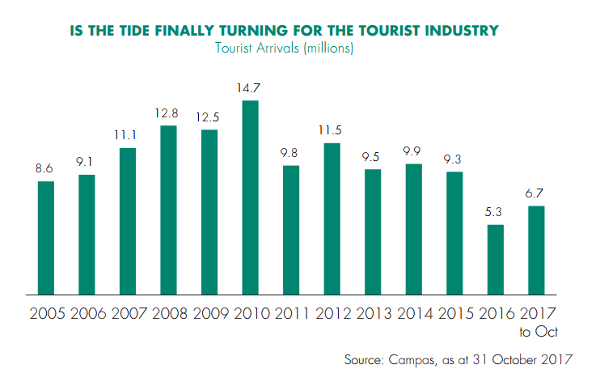 Interestingly, the past two years have been a great exercise in seeing which consumer categories are defensive and which are discretionary – also known as elasticity of demand. The clear winner as the “defender of the year” is tobacco. The near-monopoly cigarette producer (or as SABMiller used to term it – the “temporary sole supplier”) Eastern Tobacco Company has been one of the best performers this year, up nearly 200%. I am always fascinated by how little consumer goods cost in Egypt. Cigarette prices have just been hiked, but the local brands (like Cleopatra) still sell for less than US$1 per pack. I bought a bottle of cough syrup, which cost 5 Egyptian pounds (EGP) − less than $0.30. A Twinkies cake retails for EGP1.5, which is less than $0.10. Despite the low selling prices, somehow the whole value chain is making a margin along the way.

Our portfolio has a variety of investments in Egypt. The largest single holding is in Commercial International Bank. The bank has a history of delivering strong returns, has low costs and has been tucking away excess provisions wherever possible. The bank’s current strategy is to gather deposits at very cheap rates and reinvest this money in government securities. This means paying people as little as possible on their deposits and then lending this money to the government for somewhere in the range of 15% to 20%. The great thing about lending to the government is that the bank doesn’t have the cost of non-performing loans and customers defaulting. We also have exposure to some of the consumer companies where we expect earnings to recover.

Our portfolio delivered strong returns in 2017. A large part of this came from its exposure to Egypt – in particular, our investments in cheese producer Obour Land and Eastern Tobacco Company. We expect our Egyptian positions to continue to generate good returns during 2018.