Sally Karago is one of Kenya’s most prominent fashion designers. She ventured into the fashion business in 1992 after graduating with a degree in fashion from a British institution. Although it was an era when many young Africans would have opted for life in Europe, Karago preferred to move back home. 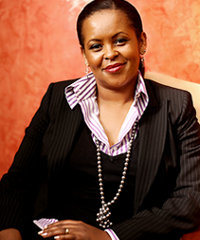 “I knew competition was big in the fashion industry in Europe at that time, yet back home there was almost no sense of fashion. I was so certain that I had to come home and help build the industry here using the skills I had acquired abroad,” says Karago.

Although she always had an eye for fashion, and was generally a creative kid dabbling in various arts, it is in Europe her creativity was refined. She learned from her peers from other countries, researched books and visited libraries and museums for inspiration. She also worked part time with leading retailers in London and got insight on the retail-end of fashion.

It is with this new perspective that she established Mcensal Limited, one of Kenya’s leading fashion design firms and consultancies. She started a workshop with a few tailors but over the years her business has expanded. She now runs the Mcensal Fashion House focusing on corporate uniforms and made-to-measure for individual clients. And Mcensal School of Fashion Design which offers training to upcoming designers. Recently she opened SK Collection, a retail store selling her ready-to-wear collection at a Nairobi shopping mall.

After more than two decades in business, Karago (also chair of the Association of Fashion Designers of Kenya) says in the early days she built her name by participating in, and winning, fashion contests in the region. She pioneered the use of materials such as porcupine quills in making dresses and thus attracted deals with both event organisers and corporate firms.

Identifying opportunities in the market has also helped grow her businesses. She explains she started her school of design after one too many experiences with ‘trained designers’ who were at best tailors. But it took 10 years before she actualised a dream to improve the training of designers.

When she finally decided to establish the school, Karago took Thursdays off for a whole year and meticulously planned for everything a fashion school would need. It started with spending her days at home writing down a list of essentials to eventually flying to Dubai to purchase equipment. But when she opened her school in 2005 there were four lecturers and only one student (whom she sponsored). But she persevered and today the school is a leading trainer in the field.

She admits her journey in entrepreneurship has been challenging. In the late 1990s she ran a retail store which stocked imported clothing from France, but she had to close down after the nation dropped its own currency and adopted the euro. The same product she would have purchased in francs became 10 times more expensive. And recent years have been tough for all fashion business players due to a slump in tourism prompted by terrorism fears.

“It has affected us especially, because we do corporate wear for hotels. Thankfully some of our clients are in the wider East African region so we still had business from hotels in the region. But at the beginning of the year I had to let go some tailors.”

Difficulties accessing financing, and high taxation for imported fabric, are also challenges in the industry. One shouldn’t expect a smooth ride in business, Karago warns, noting that writing down her short-term and long-term goals every year gives her “momentum”. Persistence, consistency and perseverance are vital to succeed, she adds.

“You have to have faith in your product. You have to know what you are good at and specialise in it. Don’t be a master of all trades,” she advises. “I think being consistent has also made me grow because I stuck to this. Even when things were difficult and I had no clients, I would still come to the office to draw and go to the market to look at fabrics. I believe tough times don’t last, tough people do.”