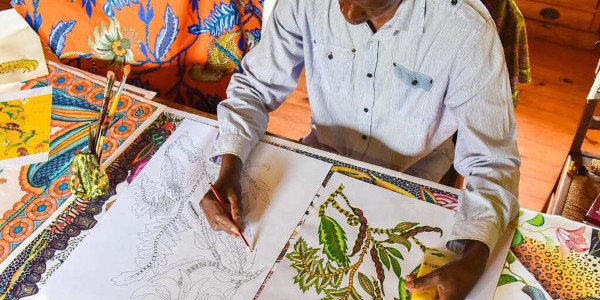 Whimsical luxury. Two words that find a happy partnership when trying to describe the essence of Ardmore Design’s bold and colourful patterns. Those who own one of their products would also be able to boast of having an item that is part of the design family of ceramic pieces that have graced the stages of many international exhibitions – such as at the Museum of Arts and Design in New York City or Christie’s in London.

Jonathan Berning talks passionately about the history behind the two Ardmore businesses. His mother, Fée Halsted, started Ardmore Ceramics more than 35 years ago, after losing her position as a lecturer at a local university in the South African province of KwaZulu-Natal. Being a passionate teacher at heart, Halsted took on a young woman, Bonnie Ntshalintshali, as an apprentice and taught her ceramic art. In 1990, Halsted and Ntshalintshali jointly won the Standard Bank Young Artist Award. Ardmore Ceramics, named after the farm where Halsted had her studio, was suddenly on the map.

About four years ago the family and advisors behind Ardmore Ceramics decided to branch out into more scalable products and establish a luxury lifestyle brand using the designs, dense in detail and inimitability, that has made the ceramics business a success. These designs came to life in fabric prints (grouped today into four collections, namely Zambezi, Qalakabusha, Wonderboy and River Chase) and is used to create the product line offered by Ardmore Designs: cushions, tablecloths, placemats, handbags, napkins and more.

With a dedicated outlet in Johannesburg, Ardmore Design’s products are also stocked in stores in the US, Greece, Belgium, France, Zambia, Sweden, Namibia and the Netherlands.

Today Ardmore Ceramics (including the artists) have 85 employees and Ardmore Design, eight.

How has the business grown into what it is today?

Berning says he believes the success that Ardmore Design has achieved is rooted in the care that goes into their designs and the quality of the products.

“Both in the ceramics and in the design business, something that gives us an edge is this attention to detail. We cherish our designs and take time in the process. You can look at the detail and notice small, little whimsical things. It’s playful and fun as well,” he says.

By nature not a creative person, Berning says he never really saw himself in the family business, but joined a few years ago and has not looked back. “I think we make a good team, my mom and I. As long as I stay out of the creative side of things and she stays out of the business side of things,” he laughs. Berning’s sisters, Catherine and Megan, are also involved.

He attributes the growth and recognition that Ardmore has received to a handful of breakthrough moments. One of these was when his mother met Eleanor Kasrils, wife of South African politician Ronnie Kasrils. Through this connection, links with various embassies and consulates were established around the world. International exhibitions and shows followed.

“That was the first step. The international world got to see Ardmore – see these incredible designs and artworks coming out of Africa. Another big breakthrough was when Christie’s auctioned our artwork, because to be recognised by them was a great association,” Berning says. And then international brands Cole & Son and Hermès approached the business to use their designs.

“We are seeing a promising market there,” Berning says. With the launch of this online store, Ardmore Design has also found a partner in DHL to tap into this market potential. “DHL has a great standard and we are able to quote our clients a good price.”

Berning says they have seen revenue from the e-commerce side doubling in the second year since it was launched. “What is nice to know and see is that a lot of the e-commerce sales are local purchases from South Africans. We are currently sitting at about 10% of our total revenue that is coming through online and this can definitely grow even more in future.”

For the foreseeable future, Ardmore Design is putting considerable time and money into this sales channel in order to take their interpretation of African design straight into the living rooms of even more customers.

“Any business that doesn’t consider e-commerce is possibly not thinking strategically. It is the way the world is going,” Berning says.