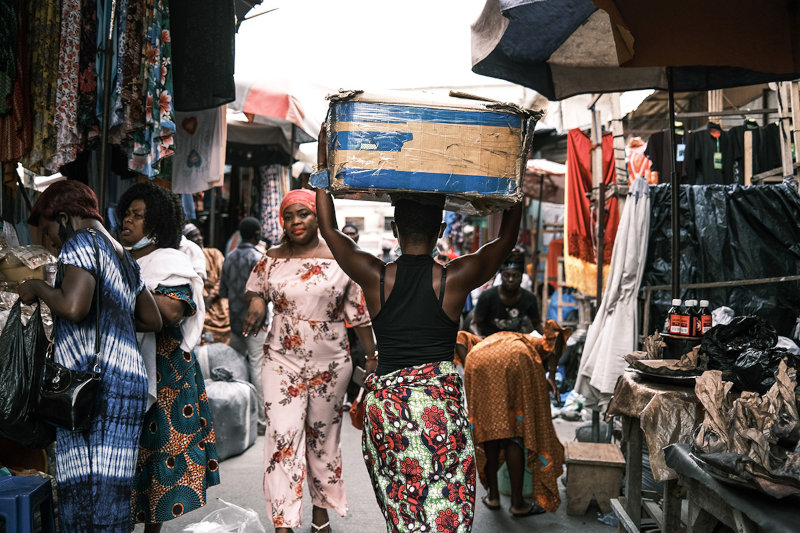 This article is part of the Africa Crossing Borders series by MFS Africa, focusing on the multi-layered meaning of African borders and how Africans have transcended them. See original here.

If Lomé is the epicentre of trade in West Africa, Asigamé is ground zero. The narrow streets, crowded with shops, stretch across a 2 km block in downtown Lomé. The red Cathédrale Sacré-Coeur, home to the city’s Catholic Archdiocese, sits at the market center, towering over hundreds of street traders selling everything from shoes to makeup to fresh meat.

Asigamé (a-si-GA-may) pulsates with energy. Food vendors hawk refreshments in bowls and crates balanced on their heads as they weave in and out of crowds. Porters push carts laden with goods. Touts bring overwhelmed first-time Asigamé visitors to shops for a commission. Caterers serve breakfast, lunch, and dinner, catering to every palette from West Africa. 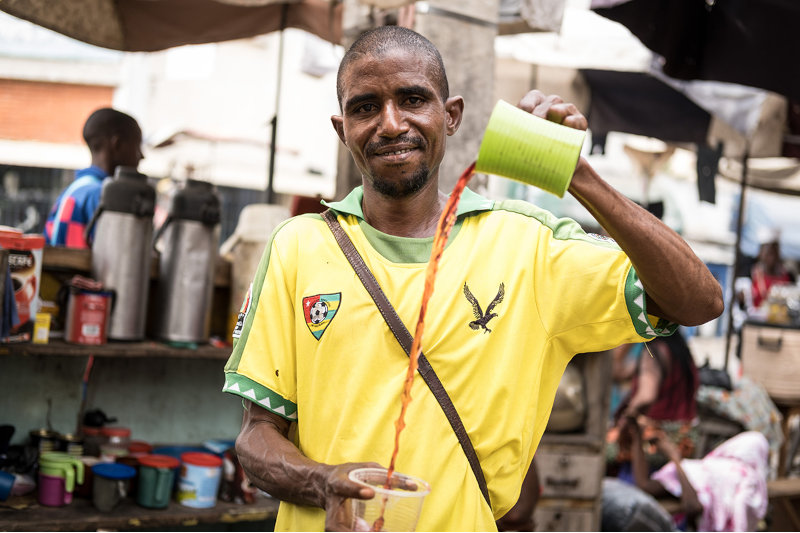 Every trader worth their salt who comes to Togo knows that they simply must be at Lomé’s largest market.

Like many African markets, Asigamé is a melting pot of people who come to Lomé in search of opportunity. For many, the market is a ladder for social mobility. However, trade can be fragile. As an archetypal trade entrepôt, Togo and its largest market have not been spared from the vagaries of a global economy. Over the decades, Asigamé and the people who bring it to life have seen their fortunes ebb and flow.

Asigamé is known for the diversity of its goods, especially used items from Europe or the US. However, Lomé’s largest market is synonymous with being a textile hub. Its streets are splashed with vibrant fabrics: lace and sequined bolts of cloth from Asia, traditional balogun from Sahelian countries, and a range of traditional wax prints.

The wax fabric trade put Asigamé on the map, giving rise to a glamorous group of women traders, known as the Nana Benz. After an economic crisis hit Ghana in the 1950s, the wax fabric trade moved to Lomé and fell into the hands of these enterprising women. In the 1960s, they accrued such wealth that they were the first to buy Mercedes Benz in Togo, giving them their famed moniker. Many went on to enter politics.

By the 1970s, the Nana Benz reached the pinnacle of their success: they received exclusive distribution rights for Vlisco, a Dutch company that produces highly prized wax fabrics. Buyers from Nigeria to the Democratic Republic of Congo came to Lomé to buy from the Nana Benz.
‍
During those heady days, when the wax fabric trade was still strong, Beatrice Lawson first arrived at Asigamé. Lawson grew up in Lomé, one of 28 children. In 1983, she joined her aunt in the market to sell fabrics, carrying her one-year-old daughter on her back. 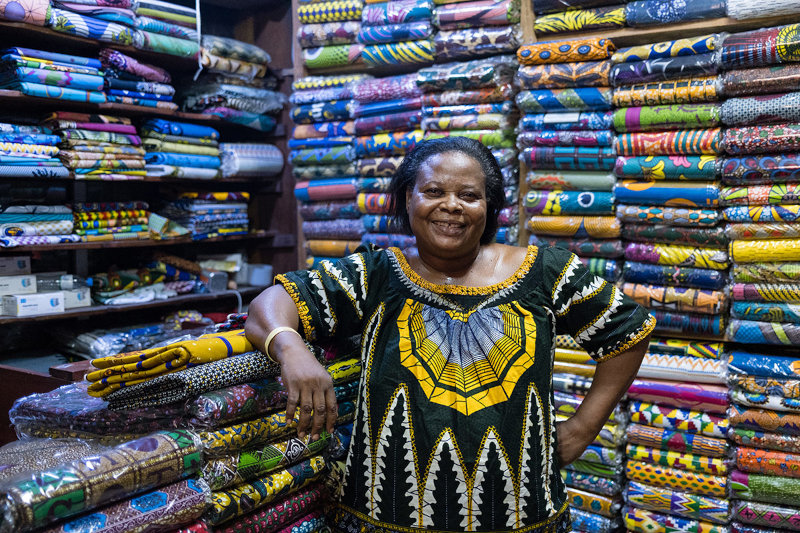 Beatrice Lawson started trading wax fabrics with her aunt in the 1980s.

They were the golden days of Asigamé. The Nana Benz reigned supreme, symbols of a resilient Lomé in global trade. Customers from all over the region still flooded the market.

“The time when the Nana Benz were selling on credit [from the manufacturers], it’s not like our days. They were trading the Dutch wax fabric, Vlisco. They received the supplies and sold,” said Lawson.

After the 1991 general strike, which marked a period of political unrest in Togo, Lawson quit trading in the market to help with her husband’s business. For over ten years, she was gone from Asigamé.

Around the time Lawson was leaving Asigamé, Benjamin Eze, an Igbo businessman from Nigeria, arrived in Lomé. Not knowing a soul in Togo, he hurried to Asigamé and sought out the help of other Igbo traders. In the beginning, he frequently traveled to Nigeria to buy goods for hawking in the streets of Asigamé. 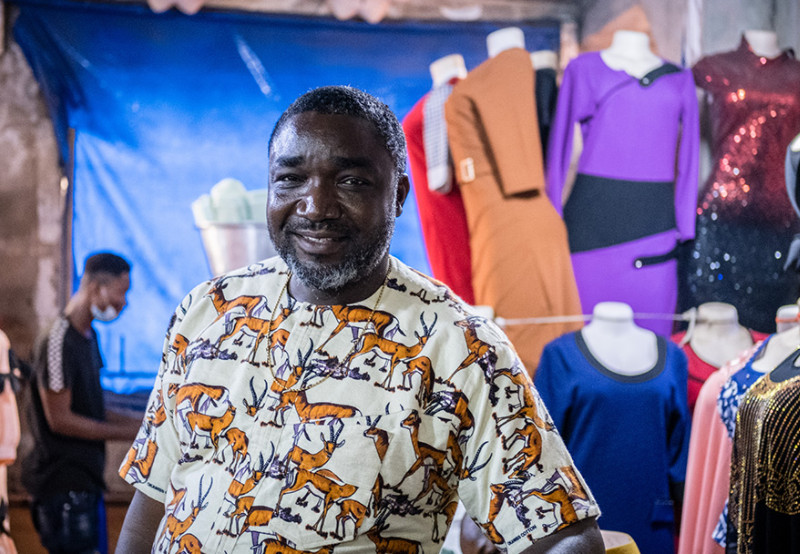 After a stint in the used clothing business, Eze stumbled upon a more profitable venture: women’s apparel. He started traveling to Hong Kong to source his supplies and increase his margin. It represented a major turning point in his ten years of trading in Asigamé.

Another new arrival to the market, Joy Akossiwa, a Ghanaian born in Togo, returned to Lomé in 1992 after spending her teenage years in Ghana.

Akossiwa did not speak Mina and struggled to find work. Facing few options, she started baking and selling meat pies in the market. 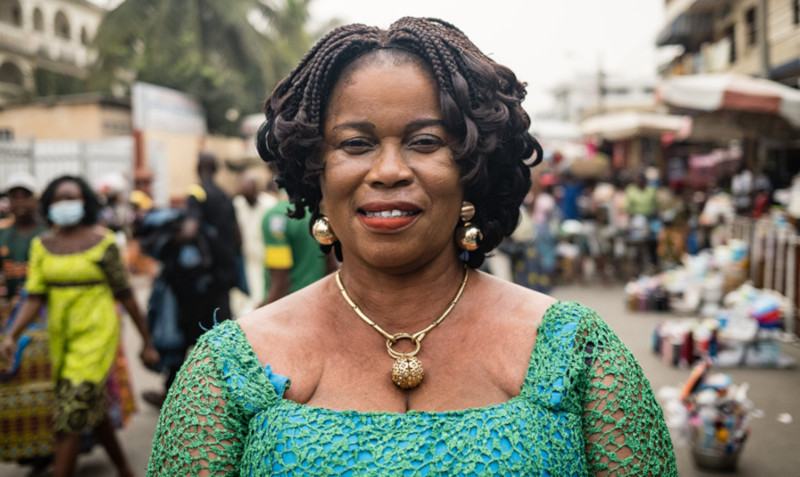 Joy Akossiwa sold meat pies for two years before quitting to work in a school.

“When I first came to Asigamé, I couldn’t speak Mina. The only word I knew was kpono, 25 CFA francs. Anything you’d ask me, it was kpono,” said Akossiwa, laughing.

All day, she would walk Asigamé’s narrow streets. She eventually found a lucrative clientele in the five-floor market building. “With my smiles, I’d sell a lot [of pies]. I had to climb the stairs of the Asigamé market building. I stopped having to hawk,” she said.

Asigamé was not immune to changes in the regional and global economy. As a trade entrepôt, Togo has relied on arbitrage – playing with currency differentials, customs and import duties, and regulations – to attract opportunistic traders and businessmen.

A shift in global trade patterns led to a spiraling of fortunes for Asigamé and its traders. Chinese wax fabrics – many of which were cheap counterfeits – began to flood the market. Togolese traders struggled to compete. Even the Nana Benz were hit. Over time, traders from India and China started to arrive in the market. They slashed prices, putting further pressure on the local textile trade. In a last blow to Asigamé, regional buyers began to bypass Togolese middlemen and source their fabrics directly from manufacturers. 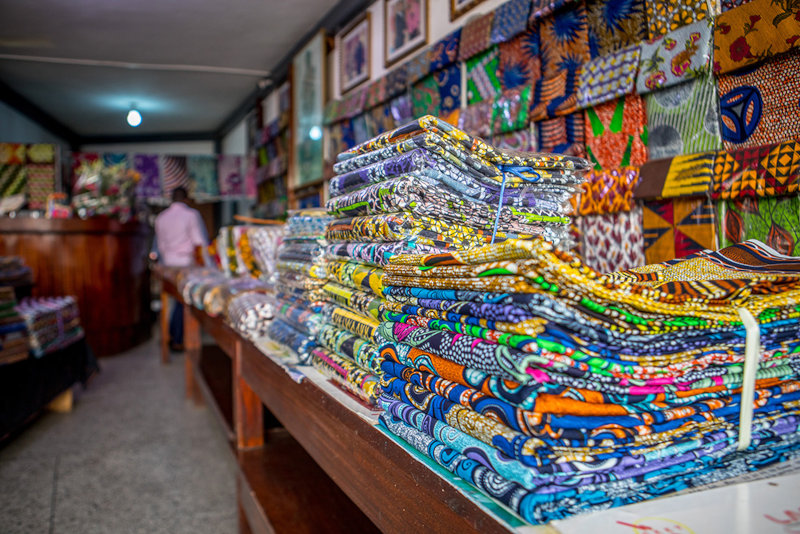 Over the years, Asigamé’s wax fabric trade has faced pressure from counterfeit goods.

Conditions at home only exacerbated the situation for Asigamé traders. In 1991, Togo’s political unrest culminated in a general strike that shut down the Togolese economy for months. Foreign partners, notably the EU, pulled out of agreements with the Togolese government. Foreign investment plummeted. The 1994 devaluation of the CFA franc made the situation worse. Overnight, imports doubled in price for Asigamé traders.

“After the strike, the Chinese wax fabrics started to arrive in Asigamé. There was strong competition. We couldn’t sell Dutch fabrics any more. Everyone turned to selling Chinese wax fabrics in Togo. The large wholesalers started buying them in bulk. In addition to the Chinese, other competitors started trickling into the market. The trade wasn’t working like it did before,” said Lawson.

The effects of shifting import regulations in Nigeria, West Africa’s largest market and a lifeline to Togo, also reverberated in Asigamé. Between 2002 and 2005 when Nigeria closed its borders to clothing imports, shipments were diverted to Lomé. Nigerian traders would buy the clothing and smuggle it through Nigeria’s porous borders.

Eze was one of many traders who benefited from the closure. But, this proved fleeting. Just as quickly as they are put in place, import bans can swiftly be reversed.

In 2010, when Nigeria reopened its borders to clothing imports, Eze’s business evaporated overnight. His Nigerian customers stopped coming since they started receiving direct shipments to Lagos. As the naira had also tanked, Eze’s clientele could not afford to buy goods in CFA francs.

With the Nigerians no longer coming, Eze had to cater to other regional markets: Ghana, Burkina Faso, and Côte d’Ivoire. But, he was stuck with apparel that he had specifically bought for his Nigerian customers. He was faced with a difficult decision.

“To switch over to what Ghanaians and other West Africans like to buy, I needed money. I had no choice but to drop the price of our goods and sell them. We lost a lot of money,” said Eze.

In 2013, Asigamé hit a new low. In the middle of the night, a fire broke out in the main market building and burned for nearly twelve hours. The blaze was so strong that Ghanaian firefighters from the Aflao border assisted their Togolese counterparts in putting out the flames. Trillions of CFA francs worth of goods were lost in the fire.

In 2013, Asigamé’s main market building burned down. The area is still under development.

“We were frightened when we heard that the market was burning. Some traders had panic attacks. Some even died. Everyone was asking themselves: what is going to happen? No one understood anything,” said Lawson. “It was like a dream, a film. It was because I believed in God that I was able to hold on.”

Yet, despite the many challenges, the traders of Asigamé continue to persevere.

“Although trading doesn’t work anymore, we’re always confident that things can get better. Because we don’t have a choice,” said Lawson.

With help from her assistant Victor, she continues to sell vibrant wax fabrics from the shop she inherited from her aunt. Hitarget, a Chinese brand that initially sold counterfeits, is her best-selling fabric. “Their quality has improved a great deal over the years,” says Lawson.

For others, Asigamé acts as a springboard to other pursuits. They end up leaving the market entirely.

For two years, Akossiwa sold meat pies in Asigamé. But one rainy season, she was stuck at home. She could not sell in the market due to the heavy rains. She needed a new job.

With her background in education, she became a teacher at a small private school. But, after her boss’s sudden death, she decided it was time to go back to Ghana.

Waiting at the border, she had a moment of inspiration.

“I went early to cross the border. At six o’clock, I saw children crossing the border to Ghana to attend school. I stood at the corner for almost one hour, watching them. So there are English-speaking students in Togo? I crossed the border from one side and returned to Lomé,” said Akossiwa. 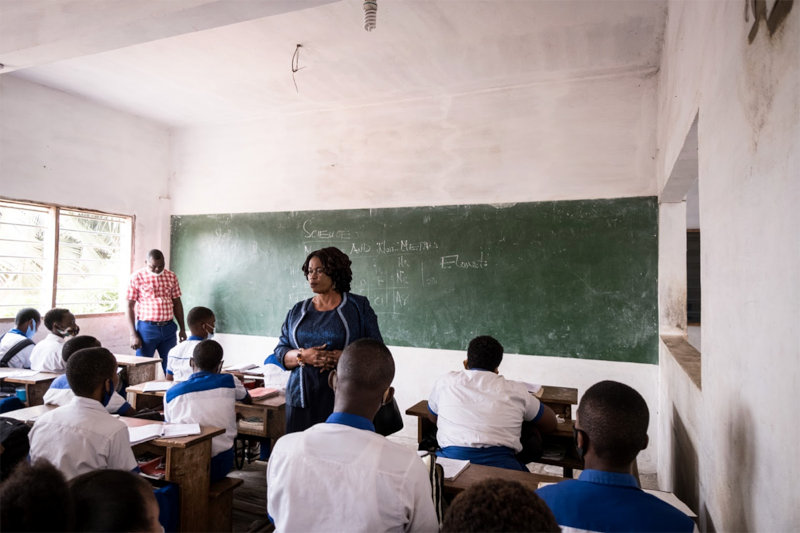 Joy Akossiwa opened her first school over twenty years ago.

More than twenty years later, Akossiwa is the owner of one of Togo’s oldest English-speaking schools.

She plans to open a private university in the future.

Through grit and resilience, other traders have adapted to the changes in Asigamé by seeking out more value from a globalised economy. Often, they go far afield to do so.

When Eze’s business crashed, he spent six months in China trying to find cheaper suppliers for his women’s apparel.

“I left my family in Lomé to go to China. I stayed there for six months – I had to learn how to grow the little money that I had. I asked [people] questions, seeing where I can get the goods cheaper,” he said.

“When I returned to Lomé, I moved from place to place in West Africa, showing my goods. After this hard work, it was paying small, small. From there, we were able to grow.”

He is slowly making his way back up though he still has not returned to his peak profitable years.

Asigamé, and Togo, look to the future

Now that the Africa Continental Free Trade Area (AfCFTA) has gone into effect, Asigamé faces another turning point. With the acceleration of free trade, Asigamé could be propelled into another golden era, reminiscent of the Nana Benz times.

But one thing is certain: Asigamé will continue to welcome new entrants, traders from all over West Africa, who look for opportunity and a better life for themselves and their families.

No matter the challenges it faces, Asigamé continues to play a vital role as one of the leading wholesale markets in West Africa.