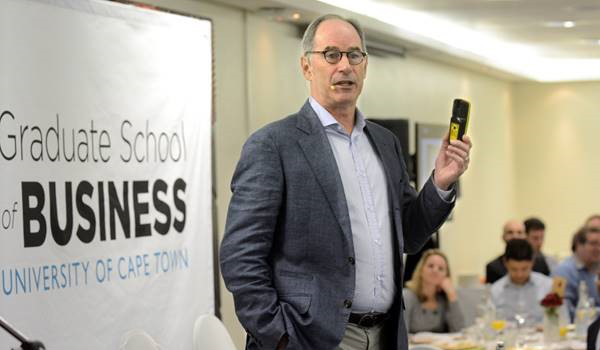 Great strategy is critical to the success of every organisation, says internationally acclaimed Canadian-born thought leader Professor Roger Martin. The problem is, most managers and business leaders find it more complicated, arduous and ineffectual than either they would wish or is productive for their organisations.

Martin, who will host a two-day strategy masterclass at the University of Cape Town’s Graduate School of Business (GSB) from 4-5 September, says it doesn’t have to be that way. Strategy can and should be simple, fun and effective. But that requires a clear definition of what strategy is and a simple process for making strategy choices.

He argues that strategy is not a long, planning document; it is a set of interrelated and powerful choices that position an organisation to win. “Making strategy choices is never easy because it means doing some things at the expense of others,” says Martin, whose ‘Strategic Choice Structuring’ process, helps managers in many leading organisations around the world work together to make powerful choices.

During the masterclass, participants will be introduced to an integrative and design thinking framework that underpins Martin’s approach and will position them to develop the strategic capability to make better strategic choices for their organisations.

“I have spent years studying leaders with exemplary records and found that most of them share a somewhat unusual trait: They have the predisposition and the capacity to hold in their heads two opposing ideas at once. And, without panicking or simply settling for one alternative or the other, they are able to creatively resolve the tension between those two ideas by generating a new one that contains elements of each, but is superior to both”.

Martin terms this process of consideration and synthesis, integrative thinking and says it is this discipline—not superior strategy or faultless execution—that is a defining characteristic of most exceptional businesses and the people who run them. “Integrative thinking is a rare and underused skill that can tremendously improve people’s odds of success” he says.

Martin believes this potentially powerful tool is underused because putting it to work makes most people anxious. “Most of us avoid complexity and ambiguity and seek out the comfort of simplicity and clarity. We often don’t know what to do with fundamentally opposing and seemingly incommensurable models. Our first impulse is usually to determine which of the two models is ‘right’ and, by the process of elimination, which is ‘wrong.’ But in rejecting one model out of hand, we miss out on all the value that we could have realised by considering the opposing two at the same time and finding in the tension, clues to a superior model. By forcing a choice between the two, we disengage the opposable mind before it can seek a creative resolution,” he says.

Kumeshnee West, director of Executive Education at the GSB, says Martin’s masterclass will provide participants with the opportunity to engage with one of the leading business thinkers in the world.
“The masterclass will deal with the key points that make decision-makers stand out from their peers and build a strong leadership presence. The content can easily be applied in one’s daily professional and personal life,” says West.

Participants will also get the opportunity to attend the first official book launch of Martin’s new book “Creating Great Choices”, which he co-authored with Jennifer Riel.

To book your place on the Roger Martin Masterclass please go to gsbblogs.uct.ac.za/rogermartinmasterclass

Martin researches integrative thinking, business design and country competitiveness. He served as dean of the Rotman School of Management from 1998 to 2013, and spent 13 years as a director of Monitor Company, a global strategy consulting firm based in Cambridge, Massachusetts.

A Canadian from Wallenstein, Ontario, Martin received his AB from Harvard College, with a concentration in Economics, in 1979 and his MBA from the Harvard Business School in 1981.