Road transport is the leading form of motorised transport in Africa but faces a number of challenges and is difficult to regulate. In the Commonwealth Business Council’s 2013 Africa Infrastructure Investment Report, Ramón Cruz of the Sub-Saharan Africa Transport Policy Programme (SSATP) stated that these challenges will be exacerbated as motorised transport continues to grow alongside urbanisation, GDP and population growth in Africa. 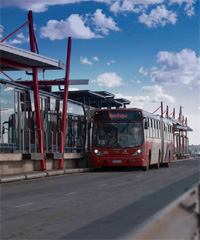 According to Cruz, road transport accounts for 80% of freight traffic and 90% of passenger traffic. However only a quarter of the total road network in Africa is paved and poor road conditions is still a huge problem in many areas.

“Transport costs are relatively some of the highest in the world, accounting for 30% of the total value of exports, compared with 8.6% for all developing countries, according to UNECA,” noted Cruz.

In many African countries, the failure of state-backed public transport systems has led to the growth of the informal transport sector. This is made up of mostly minibuses, taxis and, more recently, motorcycles.

“Today, minibuses account for half the trips made in motorised transport,” stated Cruz. “The informal nature of this sector prevents it from being regulated. As a result, the drivers are often inadequately trained, drive irresponsibly, or work long shifts – all contributing to safety problems and accidents.”

Africa has one of the highest numbers of road traffic accidents per capita in the world, and Cruz stressed that the current road transport situation on the continent intensifies social inequalities. “The lower income classes often have to walk longer distances or are left in areas poorly served by transit,” he explained. “This makes it more difficult to access social services such as schools and hospitals, or participate in markets and industries that would improve their economic situation.”

However, there have been some positive trends developing in Africa’s road transport sector in recent years. According to Cruz, road maintenance has improved and the majority of African countries have established active road funds.

“According to our estimation, nearly half of the main road network is in good condition, an increase of 100% from half a decade ago,” reported Cruz. “As a consequence, there is better access to services and markets. New bus rapid transit (BRT) lines are being planned and a handful have already opened. About half of the small urban railway system is under concession agreements. And finally, some modest data collection efforts have begun.”

Cruz highlighted some successful African road transport projects that can be replicated elsewhere on the continent:

“These systems are known for being cost-effective, attractive, high-frequency corridors designed for high volumes with off-board fare collection, elevated stations, separated lanes, and environmentally friendly new buses with intelligent transport systems,” explained Cruz. “Cities are attracted to this option because of its high-speed, reliable service; the equity dimension, since it serves all kinds of people; economic growth potential, especially to real estate; and its relatively low cost and ease of implementation and operation.”

Cruz identified Lagos (Nigeria) and Johannesburg (South Africa) as examples of African cities with BRT systems that have had “relative success”.

The Lagos BRT system was launched in 2008. “The still expanding 22 km system carries nearly 175,000 passengers per day,” Cruz said. “It has been quite successful and has strong rates of approval.”

In South Africa, the Rea Vaya BRT opened towards the end of 2009 in Johannesburg. It is run completely in its own dedicated lanes and it is expanding its original 25 kms.

The Lagos Metropolitan Area Transport Authority (LAMATA) was created in 2003 with the purpose to coordinate transport policies, programmes and actions. According to Cruz, it has been hailed as the top transport authority in sub-Saharan Africa.

“Based on best practices from abroad, it is designed as a professional organisation with a board of directors comprising the private and public sectors, as well as union representatives. This board reports to the Governor, as opposed to the state Commissioner of Transport. Very importantly, LAMATA enjoys a level of independence because its revenues come from the Transport Trust Fund, generated from user charges. It follows a five-year corporate and investment plan and is subject to an annual audited account, which helps to keep transparent operations,” explained Cruz. “This kind of institution is very important in the creation of integrated plans for infrastructure development.”

It is estimated that in Senegal’s Dakar, over 75% of the daily trips made are through public transport, according to Cruz.

“In an effort to improve standards, the government created a programme by which it would finance minibus renewal, while at the same time formalising the relationship with the operators and professionalising the sector with specific routes and fares. It is a good example of how to use public sector finance to benefit private sector operators.”

Cruz added that the government also provides technical assistance and training of the operators and drivers. The programme also reduces air pollution by removing the obsolete buses from circulation.

“The big success of the programme is not only in the renewal of the buses, but in the formalisation of a sector that in many places seems intractably informal,” continued Cruz. “As a result, this scheme offers faster and more reliable service, predictability of fares and increased revenues for the operators.”