The Anzisha Prize, the premier award for Africa’s top young entrepreneurs, has been receiving applications from across the continent by those looking for a share of US$75,000 to fund their venture. In the end, only 12 social or business entrepreneurs, between ages 15 and 22, will be selected. 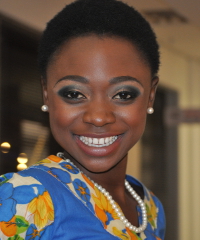 The Anzisha Prize is looking for young leaders who are using entrepreneurship to inspire change and solve problems in their communities. Those that make the cut stand to benefit from way more than funding and cash prizes. They will become a lifetime member of the Anzisha network, and profit from continuous support through mentorship, access to business connections and investors, as well as brand exposure through media attention.

With the deadline for applications (April 15) fast approaching, past finalists want to encourage entries for this year, and shared how they have benefited.

Winifred Selby was just 15 when she co-founded Ghana Bamboo Bikes Initiative. The initiative manufactures affordable, multi-purpose bikes out of bamboo. And last year she was named one of Anzisha’s 12 finalists for 2014.

“On my part it has been an eye opener, source of inspiration and has led to other opportunities which are priceless. Through the exposure gained  we are currently in touch with a Norwegian-based organisation that approached us to offer their industrial designing service on a pro bono basis,” she explained.

“And a university in the US, which read my profile through the media exposure gained from the Anzisha programme, are also sending two researchers from their mechanical engineering department this summer to upgrade the skills of our bamboo bike builders, and build their capacity to come out with different products. They have also pledged support for our electric bamboo bike ambulance project. Like I said, the experience and ensuing opportunities are priceless.”

When Best Ayiorwoth was just 19, she started a microcredit business in northern Uganda that would go on to help hundreds of women and young girls. GIPOMO provides micro-loans to women with small businesses so that they can keep their children, especially girls, in school. Ayiorwoth has personal experience of how families often only choose to send boys to school when they can’t afford to send all their children.

“Winning the Anzisha Prize helped broaden my organisation’s structure. It also helped advertise what we do. For example, it became the focus of the Ugandan media and that helped people know about it. It also created a number of networking opportunities so I’m able to get different kinds of help from different people, from different departments.”

Ayiorwoth’s goal is to expand GIPOMO across Uganda and eventually into other African countries.

“It gave me the courage that I am able to make it to my goal, and also added value to my organisation. I am learning how to become professional in all I do concerning my organisation, mostly because of [receiving] some mentoring.”

Repurpose Schoolbags manufactures school bags from ‘upcycled’ plastic shopping bags which, imbedded with solar technology, are able to charge up during the day and transform into light for underprivileged learners to study after dark. They are also designed with reflective material to increase child visibility and pedestrian safety for children walking to and from school. One of the company’s revenue-producing models is through targeting corporate social investment budgets.

Last year Kgatlhanye won second-place and $15,000 at the Anzisha Prize. “It came at a very important time in my life, when the odds were really stacked against us in the business. We had been, for eight months, prototyping with no income, expenses mounting while not earning a cent. I was literally about to get kicked out of my flat.

“Not a lot of people could understand what I was going through, and I didn’t have a lot of support.”

She added the Prize and funding gave her the opportunity to “breathe again”. Furthermore, she benefited from mentorship and meeting fellow entrepreneurs from across the continent whom she could relate to.

“Beyond the money, I think [the greatest perks] have definitely been the support system and feeling like there is a family [I am apart of].”

While Kgatlhanye said media attention is not her main priority, the brand awareness that comes with it has helped. She and her venture have received attention internationally, including a feature by CNN.

“The exposure has been great and helped open a lot of doors in that when Rea Ngwane [my business partner] or I walk into a boardroom, people don’t just look at us and think: ‘Can these 22-year-olds take on our budget and actually be able to execute?’ We have some sort of track record and we have been known to do good work.”

Benedict Mundele, a 2014 Anzisha finalist, is the owner of Suprise Tropicale, an organic canteen to promote a healthy lifestyle in her community in Kinshasa. The idea came to her when she was 16 and today she has plans to start processing her food products and supplying local supermarkets.

For Mundele, one of the most important things the Anzisha Prize team did for her as an entrepreneur was to believe in her dream. “Anzisha is a wonderful gift, something I never had before in my business… it gave me more belief and determination that I can change Africa with what I am doing.”

She added that she has also benefited from media exposure and been contacted by various people that can assist her business expansion.

Jeffrey Mulaudzi is a 2014 Anzisha finalist. He founded lifestyle tour company Mulaudzi Bicycle Tours during the 2010 FIFA World Cup when he saw a demand from tourists who wanted to experience Alexandria township life. Today his tours have grown in popularity, and TripAdvisor currently ranks them in the top five activities in Johannesburg.

According to Mulaudzi, the Anzisha mentorship week he attended at the Africa Leadership Academy last year helped him to focus on his next big idea, and admits he has pan-African ambitions.

In June he has plans to open a bicycle transport company in Limpopo, where people can rent bicycles cheaply, travel to a destination, and even leave them there to be collected by the company if needed.

“Anzisha helped to change my thinking, not only to focus on the township or where I am from, but on Africa as a continent, and how to better the lives of other Africans.”

He added that since being announced a finalist for the Anzisha Prize, he has received media attention, including the likes of BBC, and been approached by investors.

Donald Patrick Bambara is a 2013 Anzisha finalist and the young entrepreneur behind Green Act, a social enterprise that started when a team of students introduced a recycling system on their Institut Supérieur de Management (ISM) campus in Dakar, Senegal.

“Definitely being a finalist has transformed my life. It offered to me lifelong opportunities and support which would help me to take my business to the next level. Currently, I have access to a wide network of successful entrepreneurs ready to help and provide me with assistance and guidance,” he said.

“I do believe the ‘boot camp’ at the African Leadership Academy helped me to master my project as well as understand the path [I should] follow. In summary, being an Anzisha Prize fellow is just an amazing experience… It is the responsibility of the young African entrepreneurs to shape the future of their continent. Thus, being part of the Anzisha family could actually be the key to success by opening doors and helping you to take your business from level one to level 10.”