When Ugandan Best Ayiorwoth had to cut short her high school education because her family could not afford to pay her tuition, it broke her heart. However, this became the driving force that inspired her to start an award-winning microcredit business, at just 19 years old, that would go on to help hundreds of women and young girls in Uganda. 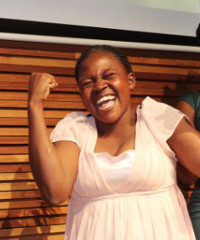 “Personally, I love being educated. I always wished to go to high standards in my education if it was possible. But unfortunately I did not have the chance to go to the level of education I wanted and I stopped at Secondary Four in Uganda,” Ayiorwoth told How we made it in Africa.

Having lost her father at the age of eight, Ayiorwoth’s mother strained to look after a family of seven in the Nebbi District in northern Uganda.

“My mother pushed me up to Primary Seven and she died while I was desperately waiting to join high school. I was 13 years old then. My two older sisters and brother struggled to push me to Secondary Four,” she explained.

“I never wanted to stop at that point in my education so it angered me… I would always remind myself that someday when I could, I would ensure that every girl child in my community received the best education they could.”

Startup capital from her first salary

At the age of 17, Ayiorwoth moved to Kampala and joined vocational training schools that offered courses such as catering, graphics and web design. She later joined S7 Project, a skills empowerment centre, and got trained in catering and entrepreneurship. Through S7 she got a job working in a Mexican restaurant, where she received her first salary and the startup capital she would later use to follow her dream.

“I wanted to prevent what happened to me from happening to other girls because I knew it was a social injustice. So the first salary I got from the restaurant is what I used to open my organisation,” explained Ayiorwoth.

She realised that if she could empower mothers financially, they would support the education of their children, especially young girls. “I have seen that when families can’t maintain all their children at school and have to make a choice, they would often choose a boy over a girl,” she highlighted.

In early 2011 Ayiorwoth went back to the Nebbi District – where she had witnessed many girls, like herself, drop out of school – and started the Girls Power Micro-Lending Organisation (GIPOMO).

Using her savings of USh 100,000 (US$40), Ayiorwoth started slowly by giving monthly micro loans to enable women to grow their small businesses. With a 10% interest rate, she kept reinvesting her profit back into GIPOMO. It wasn’t long before her initiative caught the attention of her mentor at S7, who loaned her an additional USh 800,000 ($322) to boost her enterprise.

“My organisation has a unique twist in microfinance by providing tied loans to women who make a commitment to grow businesses while keeping their girl children in school,” added Ayiorwoth.

Today GIPOMO has helped 64 women start their own businesses, 111 women expand their existing businesses, and kept 168 girls in school by supporting their mothers.

At the beginning of 2013, Ayiorwoth won USh 1m ($400) at the FINA Africa Enterprise Business Challenge. In August she won first place and US$25,000 at the Anzisha Prize, a competition that recognises and celebrates African entrepreneurs under the age of 22 who are using entrepreneurship to solve problems in their communities.

Using a portion of the prize money, GIPOMO has already scaled up its operations four-fold, expanding to four different sub-counties in northern Uganda.

Ayiorwoth started off providing credit to individual women but after two did not repay their loans, she changed her business strategy. She decided that in order for women to access finance, they needed to belong to a group of at least three. The strategic thinking behind this was that the women in a community knew each other and could group themselves with people they trusted to become guarantors for each other’s loans.

“We give them the freedom to choose who they want to be with in a group so that loans are secured. So if one woman has a problem of paying then the two others can always figure it out and stand in for that person,” explained Ayiorwoth. “This makes it easy for women without formal collateral to access financing in an easy way.”