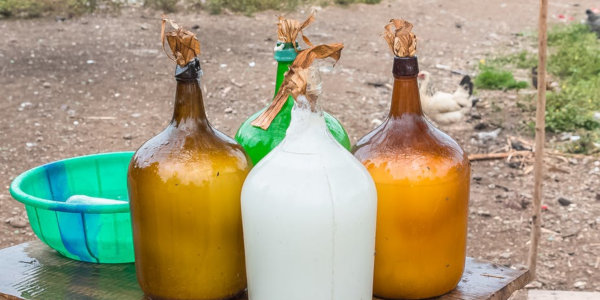 Traditional non-alcoholic and alcoholic beverages are made from locally available produce – like bananas.

And it’s usually women that are the custodians of the knowledge on how to produce them. This comes with their traditional role of staying home – while men went away to work – which allows them to oversee production, like the fermentation processes.

My colleagues and I wanted to know whether these local brews could be a good way to bring employment to women in rural Rwanda. We examined four traditional beverages and looked at whether existing institutions – like banks, NGOs, the government and academic institutions – support these industries.

In Rwanda, despite the government’s great commitment to the advancement of women, there are still not enough women in employment. Though women account for more than half of Rwanda’s workers, men are more likely to have wage employment. Many women actually work without pay. This is especially true among rural women who are mostly subsistence farmers.

Local brew production could offer a solution – by getting more women into it, and by improving the industry for those already in it. Although still hugely popular in rural areas, we found that there is little support from the government to develop the local brew industry because it’s viewed as unhygienic and hard to tax.

Yet, because the produce is readily available and the women already have the knowledge on how to make it, if properly harnessed and developed, it’s a fantastic opportunity.

What the research found

I led a group of researchers from the University of Rwanda, supported by the International Development Research Centre, to conduct studies on the possibility of indigenous beverages to contribute to economic empowerment. These included: sorghum beer – ikigage – a popular fermented drink that’s usually had at celebrations, ubushera a non-alcoholic drink made with sorghum, banana wine – urgwagwa – and the banana non-alcoholic drink – umutobe.

We interviewed 100 rural women who produced and sold the beverages. Producers often doubled as middlemen and retailers, with small lock-up spaces fitted with tables and chairs to serve customers. Also interviewed were 10 producers of umutobe who bottle and sell their products to middlemen and distributors.

Results showed that the beverages had great potential for improving the livelihoods of rural women.

Most of the women we interviewed had been in the business for over 10 years and had steady profits. These ranged from US$0.40 cents to $1 per 20 litres. And sales could reach as many as 40 twenty litre jerry cans per week – at least $16 a week. By comparison, if they worked in the tea industry they would earn about $6 a week. Their profits meant they could employ casual workers, sometimes as many as five.

We also found that before starting their businesses some of these women were unable to afford meals for their families. Their businesses meant that they were able to put food on the table, pay school fees, purchase health insurance and secure decent living spaces.

The women we spoke to said they faced a wide range of challenges.

Some indigenous products have a short shelf life, ranging from one to seven days.

The women we interviewed also don’t have collateral which meant that they couldn’t get loans from financial institutions to grow their business. For example, though they wanted to package their drinks so that they would last longer and so they could sell them in other areas, they couldn’t because the cost of packaging was too high.

Another big issue was that there’s a diminishing supply of indigenous crops, like sorghum. Rwanda is now a net importer of sorghum. This happened because of invasive weeds like striga, which destroys harvests, and unfavourable government policies, like the prioritisation of eight crops that don’t include sorghum.

The same applies to bananas. Because banana cultivation takes up a huge amount of arable land, the government has started encouraging citizens to grow other food products, like cassava, soybean, maize and Irish potatoes. These take up less space, are nutritious and could be lucrative.

But pushing for local beverages is important because this is a traditional knowledge that is already deeply rooted in Rwanda and can be scaled up and developed.

The Rwandan government and development partners can play a key role in improving the production of indigenous products.

Nigerian palm wine is a case in point. Millions of southern Nigerians consume it and local gin is produced from it. The industry provides employment for hundreds of thousands of Nigerians in rural and urban areas. A conducive environment, and government interest, have ensured the palm wine industry has flourished.

The government must support the women through training on processing, hygiene, aesthetics, customer service, financial literacy, branding and marketing, simple production methods and business management. Support should also be given to help them get access to finances, markets infrastructure and facilities.

This article was first published in The Conversation.